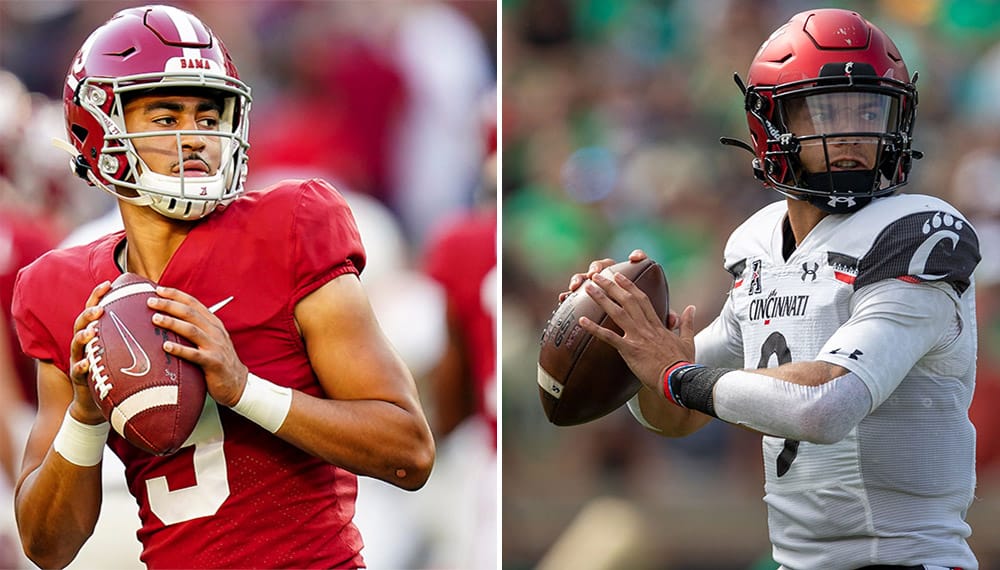 The Group of 5 will finally get its shot in the College Football Playoff as the Cincinnati Bearcats (13-0) will take on the Alabama Crimson Tide (12-1). The Bearcats have been waiting for this chance after they narrowly lost to Georgia in the Peach Bowl back on January 1 of this year. The Crimson Tide retook the #1 ranking after taking down Georgia in the SEC Championship game a few weeks ago.

Even though Cincinnati has had a perfect season, the oddsmakers don’t think they are on Alabama’s level. The Crimson Tide is favored by 13.5 points at the time of this writing. Before breaking down the game, here is a look at the live odds for both the side and the total of this exciting Cotton Bowl matchup.

What to Expect from the Cincinnati Offense in the Cotton Bowl

The Bearcats have been an offensive juggernaut all season long, as they are putting up an average of 39 points per game (7th in the nation). It all starts with QB Desmond Ridder, who has thrown for 3,190 yards and 30 TDs this year. The 6-4 senior from Louisville has also found the end zone six times on the ground.

Cincy runs a well-balanced offense that averages 5.5 yards per rush (6th) and 8.7 yards per pass (17th). Though this is an explosive group, the Bearcats have struggled a bit on third down as they only convert 41.48 % of the time (46th). Another concern is Cincinnati’s lack of production in the red zone, where they have only scored 78% of the time (100th).

It’ll be interesting to see how RB Jerome Ford does against his former team. Ford played at Alabama in 2018 and 2019 before transferring to Cincinnati. The 5-11 junior has had one heck of a season for the Bearcats, as he’s run for 1,242 yards and 19 TDs.

As far as receivers go, Ridder prefers to get the ball to Alec Pierce, who has caught 50 passes for 867 yards and 8 TDs. Pierce can give this Alabama secondary some headaches during this game, as he is 6-3 and has plenty of speed. You can bet that Nick Saban will be warning his defensive backs about Pierce.

What to Expect from the Alabama Defense in the Cotton Bowl

The Crimson Tide defense has been the subject of lots of criticism this season, as they have been plagued by some inconsistency in the secondary. However, those critics were silenced in the SEC Title Game, as Alabama looked hungrier than ever on the defensive side of the ball. The Tide ranks 7th in the country in both yards per play allowed and third-down conversion percentage allowed.

Will Anderson could end up being one of the best pass rushers in Alabama history. The 6-4 sophomore is a nightmare to block and he’s racked up 15.5 sacks and 29 tackles for loss this year. The Bearcats better plan on double-teaming Anderson or else Ridder will be running for this life most of the game.

Alabama’s secondary played much better against Georgia but they’ve been susceptible to the deep ball at times this season. This unit gives up 227.8 passing yards per game, which only ranks 62nd in the country. One of the Tide’s best defensive backs, Josh Jobe, will miss this game after undergoing foot surgery.

What to Expect from the Alabama Offense in the Cotton Bowl

Bryce Young became the first Alabama QB to take home the Heisman Trophy. Young had a phenomenal season by throwing for 4,322 yards and 43 TDs. The 6-foot sophomore may be slight in stature but he has a cannon for an arm.

Young’s favorite target all season long has been Jameson Williams, who has racked up 1,445 yards and 15 TDs. The former Ohio State Buckeye may get even more targets in this game since John Metchie will be out with a knee injury. Look for offensive coordinator Bill O’Brien to get Williams plenty of touches in this game.

The Tide’s running game has suffered lots of setbacks this season due to the injury bug. However, Brian Robinson should be much healthier for this game after having a few weeks of rest. Robinson has run for 1,071 yards and 14 TDs.

What to Expect from the Cincinnati Defense in the Cotton Bowl

Though they have an outstanding offense, the Cincinnati defense is the backbone of the team. The Bearcats rank 6th in points per game allowed, 4th in yards per play allowed, and 2nd in yards per pass allowed. Defensive end Curtis Brooks leads the team in both sacks (7.5) and tackles for loss (12.5).

The Bearcats do a great job of stopping the run, as they only give up 3.4 yards per rush (12th). However, Cincy’s secondary is the strength of this defense. It’s very difficult to beat this team through the air.

Cornerbacks Ahmad Gardner and Arquon Bush have 3 INTs apiece this season. Both of these guys are excellent cover corners who have the potential to play on Sunday. It’ll be interesting to see how the Bearcats do against an SEC receiving corps.

Cincinnati has had a terrific season but this is a huge step up in class for them. Though the Bearcats had an impressive win over Notre Dame earlier in the season, they haven’t seen anything like this dynamic Alabama offense. Cincy’s strength of schedule only ranks 79th in the country while Alabama ranks 6th.

The Crimson Tide is more battle-tested and they should be able to move the ball at will against the Bearcats’ undersized front seven. Our power ratings say that Alabama should be favored by 16.5 so we are rolling with the Tide. Lay the points and best of luck!