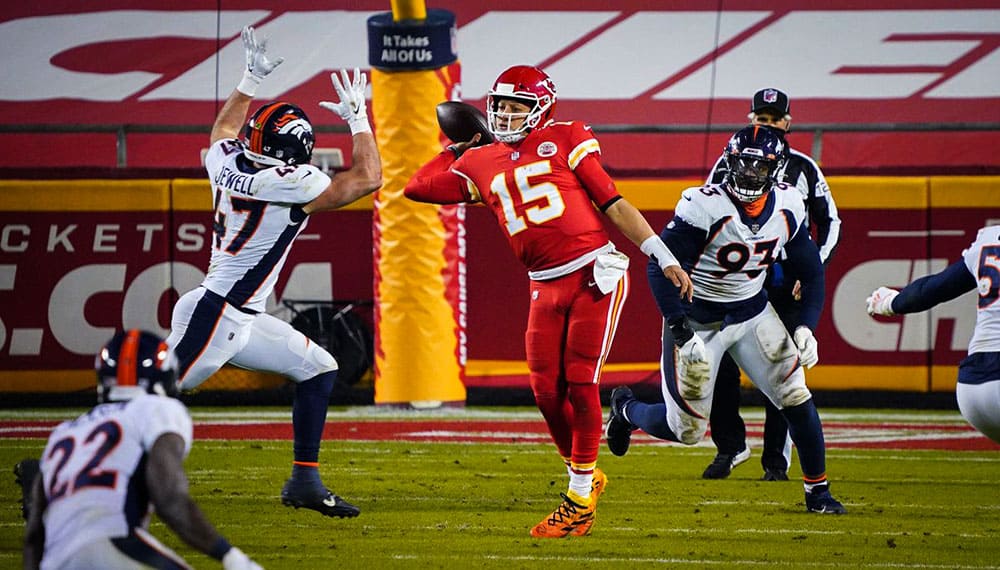 Going into last weekend and week 17 of the 2021 National Football League season, on paper this game didn’t seem like it was going to have much meaning behind it. However after the Kansas City Chiefs lost to the Cincinnati Bengals, the Chiefs will be fighting for the top seed in the AFC. They head into this AFC West rivalry game tied with the Tennessee Titans for the number one seed.

So while this game is for all purposes meaningless for the last place team in the AFC West division, the Denver Broncos, it means everything to the 1st place Kansas City Chiefs. The Kansas City Chiefs will be at full strength this weekend which gives us plenty of fun props to pick from in this game.

Patrick Mahomes is one of the most clutch quarterbacks to ever step foot in the National Football League in the entire history of the league. So you can be certain with his team's home field advantage, top seed, and bye week on the line, he is going to perform. This is what makes his touchdown prop our favorite bet for Saturday. In fact, this is a prop that I would be willing to bet a year of mortgage payments on as Mahomes always shows up in clutch situations.

Even though the Chiefs have recently leaned on the running game, they may be without top running back Clyde Edwards Helaire going into this one which makes a full on passing attack even more likely. With weapons like Mecole Hardman, Tyreek Hill, and Travis Kelce, Mahomes is always capable of throwing for touchdowns galore and only needing two seems like an absolute steal this week for the bettors.

To increase your money even further I suggest pairing it with a receiving touchdown or even the reception for yards from either Tyreek Hill or Travis Kelce. They are top five at their positions in the NFL and will likely be featured heavily in this one. At the end of the day, no matter how many guys you put on them they always seem to find a way to get open and find their way into the end zone.

While the Kansas City Chiefs offense is elite their defense has certainly let them down a couple times this season. Which is why picking Denver Broncos running back Javonte Williams to find the end zone is nearly a sure thing this weekend. Not only that but it has favorable odds well, listed at +150 going into the game.

The Denver Broncos know that they cannot keep up with the Chiefs in the air so they are likely to try and slow the game down on the ground being at home at Mile High Stadium in what is likely to be a snowy Denver, Colorado for this game.

In translation, look for Melvin Gordon and Javonte Williams to carry the load in this game. They are likely to lean on the younger Williams which is why I give him a better chance of finding the Endzone and I do Gordon however to be truthful they may both do it so whether you pick Gordon or Williams you’re making a good bet.

With the previously mentioned Clyde Edwards Helaire out in the likely weather situation in Denver this one is also a good bet. As the speedy and powerful Derrick Gore has found himself in the Endzone multiple times a season he may just Off the season with another one. He’s also capable of catching passes out of the backfield which makes them a receiving threat as well which gives you double the chance of cashing in on this prop and with favorable odds it’s a steal in my opinion.

If you feel really confident in all these picks, parlay them and really make yourself some money and enjoy a game that will be a hard-hitting, hate-filled classic as a season wraps up.