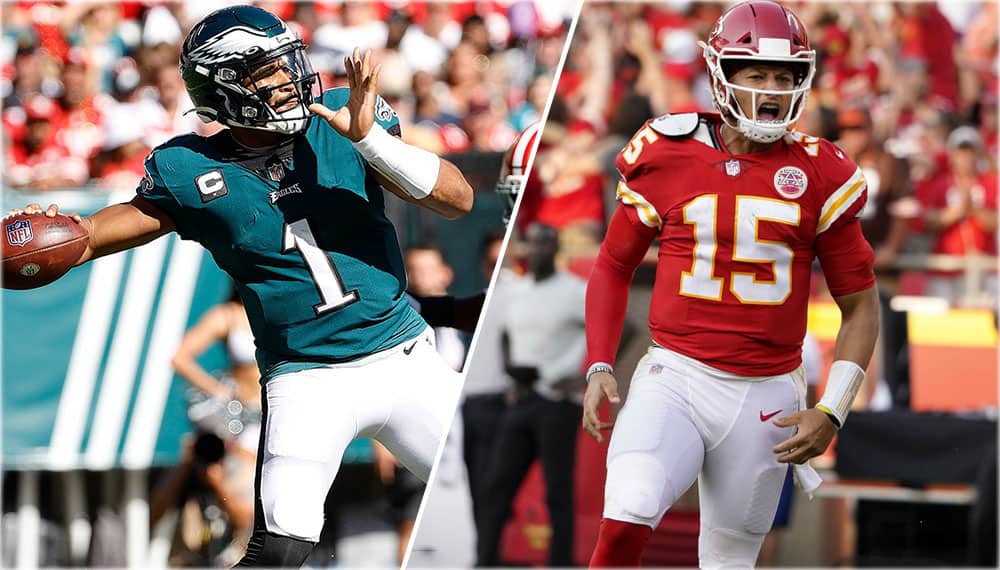 In a week full of big matchups, there will be plenty of eyes on the Kansas City Chiefs when they travel to Philadelphia. Both teams are coming off disappointing Week 3 performances and will hope to avoid digging an even deeper hole with a week 4 loss.

Kansas City simply can not put together a complete game at the moment. The offense racked up a ton of passing production in the first two weeks, but couldn't run the ball. Last week, they ran all over the Chargers, but Mahomes struggled and made critical mistakes. Defensively, after surrendering only one passing touchdown to three interceptions in weeks 1 and 2, they gave up 4 touchdowns and 0 interceptions last week.

Meanwhile, the Eagles' defense looked like world-beaters against Atlanta and San Francisco but was shredded by the Cowboys on Monday Night. This is a tough game to pick, but a closer look at the current odds and form of each team heading into Week 4 gives a clear pick for best bet for this matchup.

New PointsBet players that register using the promo code BVFBMULTI1 will receive $200 free with any $20 NFL or CFB wager. Just follow these steps:

Two teams still searching for answers will face off on Sunday when the Philadelphia Eagles host the Kansas City Chiefs. We’ve seen two significant corrections to this spread, one after each team’s Week 3 loss.

The lookahead consensus market line was Chiefs –6.5, but after KC’s loss to the Chargers, most books reopened at Chiefs –5.5. Then came Monday Night Football where the Eagles got destroyed by the Cowboys 41-21. At that point, we saw the line move back towards a touchdown and the market consensus is now somewhere between Chiefs –7 and –7.5.

At the time of posting, DraftKings was offering -105 juice on the Kansas City -7 number, which was by far the most Chiefs-friendly spread bet available. The total is sitting at either 54 or 54.5 at most books. This is an interesting number, as the Chiefs average total on the season is sitting at over 62 points.

Either Vegas doesn't believe the Eagles can keep pace, or they don't think the Chiefs can score on the Eagles. Given Kansas City averaged 34.5 against the Browns and Ravens, we are going with the former. Here is a look at the best odds available right now from US sportsbooks:

What We Expect to See from Kansas City in Week 4

We don’t like laying this many points with teams that have so many questions around them, but KC might still be the right side here. While Patrick Mahomes has been on point with a 70% completion rate and an 8.5-yard average depth of target, the receiving core of the Chiefs seems weaker than last season. Kansas City has Tyreek Hill and Travis Kelce as their clear #1 and #2, but behind them, there is a shocking lack of talent for a team that always heavily leaned on skill players that can get open if needed.

In addition to the offensive struggles, we have to mention the bad defensive performance of the team across the board. Kansas City is giving up 1.5 more yards per reception compared to 2020, which is mostly the result of allowing an average depth of target of 9.1 yards, two full yards higher than what they allowed in 2020. The run defense is also struggling three games in, with KC allowing 5.4 yards per carry, a full yard more than last season.

Despite the lack of immediate help coming from a personnel perspective, we would expect positive regression from the Chiefs across the board. In three weeks, they did face the Browns, the Ravens, and the Chargers. These three teams are all contenders are and firmly among our top-rated teams of the league. Facing Philly after playing such difficult games will be a huge step down in the level of competition.

To focus on some positives, we have to praise running back Clyde Edwards-Helaire, who is coming off a game where he averaged 5.9 yards per carry on 17 rushes for 100 total yards. Edwards-Helaire also scored a touchdown on a reception and has showcased that he can be a threat in the passing game, making up for the lack of offensive weapons at Mahomes’s disposal. The 22-year-old also missed six tackles in Week 3 and reached first downs five times for KC.

What We Expect From Philadelphia in Week 4

Despite getting blown on in Monday Night Football, the stats of the Eagles are decent across the board, especially on the defensive end. Philly has a decent run defense and the Eagles only allowed 9.2 yards per reception to opposing teams so far, two full yards less than what they allowed on average through the last season.

The problem for Philly is the lack of chemistry between Jalen Hurts and his weapons in Sirianni's system. Hurts enters week 4 with a 65% pass completion rate with an 8-yard average depth of target, but he is only reaching first downs on 32% of his passes and receivers have reached first downs at a 48% clip after successful receptions. This is a terribly low stat compared to KC’s 67% first-down rate.

We don’t have a lot of faith in the Eagles with this conservative gameplan they have been trying to build upon through three weeks. KC will score and the Chiefs should be able to get first downs at will, both on the ground and in the air. What happens if the Eagles fall behind early? We don’t think Hurts has the arm or the talent around him to get back into this game.

Familiarity is also a concern here for the Eagles. Patrick Mahomes is 7-1 against the NFC since 2019 and, while Sirianni and Gannon faced him in Indianapolis, the Eagles as a team have never faced him.

We are taking KC against the spread, laying the touchdown. After three extremely difficult games, the Chiefs should be able to finally blow a team out here, especially given the rest advantage they will enjoy with the Eagles coming off MNF.