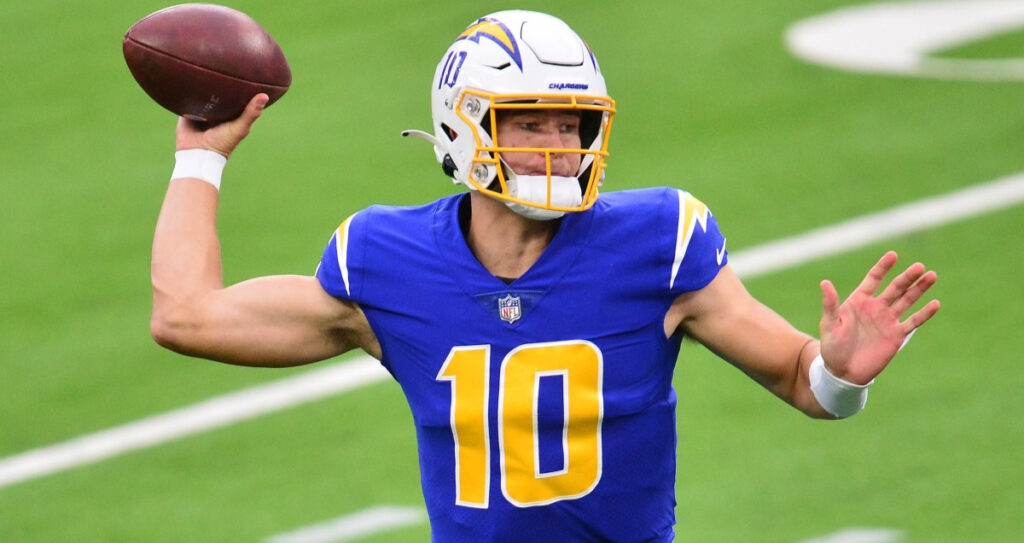 One of our 3 player prop bets for Sunday Night Football is on Justin Herbert to go Over 1.5 passing touchdowns.

Sunday Night Football will feature some familiar teams in Week 11, with the Chargers appearing for the second consecutive week as they host the Chiefs, who will make their third appearance of 2022.

Kansas City is listed as a hefty road favorite, giving 5.5 points to Los Angeles with the total posted at 51. In their earlier matchup this season on Thursday Night Football, these teams combined for exactly 51 points in a 3-point Chiefs win at Arrowhead.

Our recent slide continued with SNF prop bets finishing at 1-2 for the third straight week. Austin Ekeler carried the ball just six times for 24 yards to stay comfortably under his rushing yard total.

His teammate, Gerald Everett, left their loss to the 49ers early costing us his receptions prop. Robbie Gould also booted three field goals to sink our under play for his made field goals.

We look ahead to another exciting matchup between these two high-scoring teams in Week 11 and present our best bets for player props in this important AFC West battle.

That’s right, we’re going right back to this well in Week 11. Ekeler is averaging fewer than 10 carries per game over the Chargers' last three and has only topped 40 rushing yards three times in nine games this season.

LA’s passing game, which ranks 5th in the league at 265 yards per game, presents a mismatch for the Chiefs' defense that is 25th in passing yards allowed per game. Look for Brandon Staley to throw the ball even more often than he already does in this matchup.

Ekeler has 43 carries in his last four games compared to 48 targets and has featured much more heavily in the team’s passing game of late. He saw 14 carries and 10 targets in their earlier season matchup where he gained just 2.8 yards per carry. Roll this play over into Week 11.

On the flip side to the Ekeler play, Pacheco is fresh off his best game of the season where he averaged 5.1 yards per carry on 16 attempts against Jacksonville. His other backfield mates, Clyde Edwards-Helaire and Jerick McKinnon appeared to fade from the team’s game plan.

CEH has seen less than 10 touches in four straight games and did not carry the ball once last week. McKinnon, who has been banged up, saw more work in the passing game with six catches to one carry.

Pacheco has seemingly asserted himself as the best pure runner in this backfield for the time being. LA allows 146 rush yards per game to opponents in 2022, and Pacheco will take advantage of an increased workload and a comfy matchup.

Herbert has dealt with lingering injuries to both himself and his receiving corps in 2022 that have caused a drop-off in performance relative to his first two seasons. He’s managed to throw for multiple touchdowns in just four of nine games this year. That’s down from 12 of 17 games in 2021 and 10 of 16 games in 2020.

Now for a few things that we have going for Herbert in this play. Keenan Allen and Mike Williams are both practicing this week. Neither receiver has suited up since Week 7, and the Chargers also have Everett practicing after his early exit last Sunday.

Aside from Ekeler, those are Herbert’s top pass catchers. Herbert has thrown 13 touchdowns in five previous matchups with Kansas City, throwing for multiple touchdowns all but one of those times.

Instead of trying to soften the Chiefs’ stout run defense, Herbert will shoulder the scoring burden for the Chargers on Sunday night through the air.