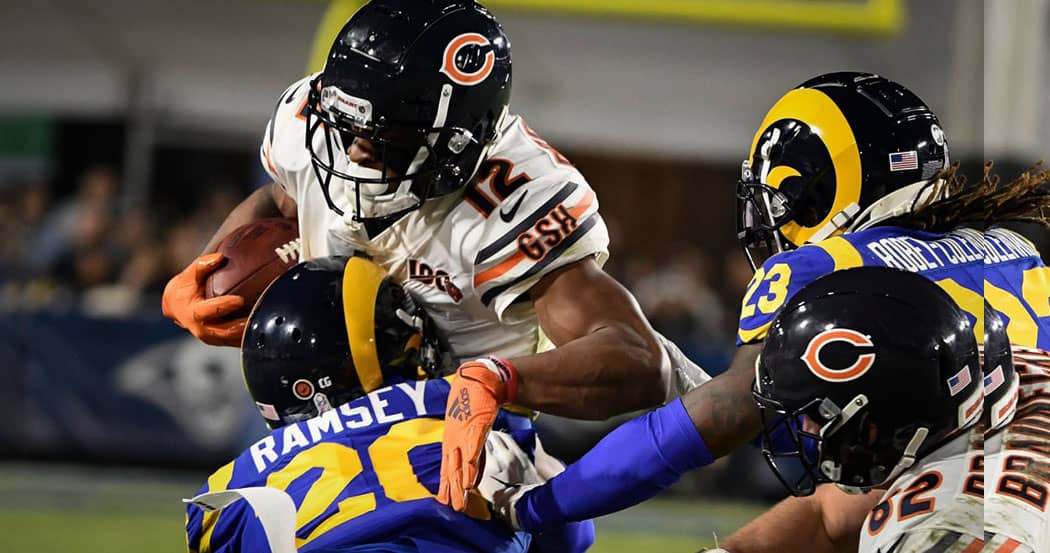 Week one Sunday Night Football features the Bears traveling to SoFi Stadium in Inglewood, CA to face the LA Rams. All eyes will be on the quarterbacks as Matthew Stafford makes his Rams debut and, much to Bears' fan's dismay, Andy Dalton makes his debut for Chicago.

Clearly, Vegas does not have a ton of faith in the Bears' ability to pull off this road upset. Chicago's current 7.5-point spread is tied with the Lions and Cowboys as the longest week 1 odds.

The total for this Sunday Night game is the third-lowest for week 1, despite the Rams offseason investment in Matthew Stafford. Before we jump into what to expect and how we are betting this matchup, here is a look at the live odds and the best spread available for each bet.

Bears at Rams: Best Odds for Every Bet

Our free live odds checker allows you to compare live odds from every sportsbook available in your state. This ensures you get the best available spread and pay the lowest juice for every bet you make.

Looking at this week one matchup between the Bears and Rams, bettors will be looking to get the hook with the Bears at +7.5 currently at Caesars. It seems there is not a book on the market that has taken enough Bears money to move the Rams off of their opening spread of -7 or to even move the juice off of -110.

Anyone looking to bet the over in this game should be able to find it at 44 points at DraftKings. The under is currently available at 44.5 at PointsBet. Keep in mind that hook is important for the under, 44 is the second most common total in the NFL over the last 8 seasons.

What to Expect From the Bears in Week 1

Andy Dalton will have a massive opportunity in Week 1 of the regular season, as Bears head coach Matt Nagy was true to his word and named Dalton the starter. Nagy emphasized that the Bears need to see Dalton in the regular season before deciding a starter for Week 2, but it seems like fans waiting for the debut of rookie QB Justin Fields - the 11th pick in the 2021 draft – will have to wait at least until Chicago’s home opener in Week 2.

The Bears offense badly needs some kind of a spark with the team grading 25th in offensive DVOA last season and PFF grading their receiving core the 22nd best going into Week 1. Andy Dalton is only projected to be about 0.5 points better per game than an average NFL backup, so we could see Nagy pulling the trigger and deploying Fields as soon as the second half of Chicago’s Week 1 game.

The 2021 Bears offense will be once again built around WR Allen Robinson. Robinson is coming off a career year in 2020, where he graded 88.5. He is widely considered a top pass catcher in the league and can help the team wherever they need him.

Darnell Mooney projects as an average WR #2 behind Robinson. Mooney was only a fifth-round pick in the 2020 draft but ended up catching 61 passes for 631 yards through the season to earn a 67.3 grade. Besides Robinson and Mooney, the receiving core is a bit of a mess, with Marquise Goodwin, Damiere Byrd, and TE Cole Kmet all likely to see a few targets in week 1. The Bears cut Dazz Newsome and Riley Ridley this week.

The run game will be going through David Montgomery, who is projected to have close to 15 carries per week. Montgomery averaged around 16 carries last year, but this year he will have a solid backup in youngster Damien Williams, plus Tarik Cohen will also be coming back from injury. Overall, this is still an okay offense, but the offensive ceiling with Dalton running the show is extremely low.

What to Expect from the Rams in Week 1

We are expecting a lot from the LA Rams. LA made a sizeable upgrade by trading for Detroit’s Matthew Stafford. Stafford is easily a top-ten QB, who should thrive with the Rams and McVay. For Stafford, LA is not only a better offensive system, but this offensive line should be the best he has ever played behind.

The Rams have a top-heavy offense, but the receiving core of Robert Woods and Cooper Kupp still grades as a top ten unit. Both players have been open on 59%+ of their single coverage targets in the last season and should be in a decent position going into the Week 1 matchup against Chicago. Since his breakout campaign in 2018, Woods only dropped 34 of his 596 catchable passes, while Kupp has been graded 76 or higher in each of his four seasons.

The WR core got plenty of help in 2020 from a solid TE duo of Tyler Higbee and Gerald Everett. With Everett playing for Seattle, Higbee will have a solid opportunity to lock himself in as the TE #1 of the franchise. According to reports, rookie TE Jacob Harris has become a special project for head coach Sean McVay and he is expected to be used as a hybrid receiver/tight end through the season.

Our Pick: LA Rams (-7)We are taking the Rams in Week 1 and laying the points. While getting the hook with the Bears was worth a look, in the end, the true odds for Rams -7 at home is under 2.5 points. There is no way you can look at these two rosters, coaching staffs, and quarterbacks and think LA is only 2.5 points better than Chicago.

Good luck and be sure to subscribe to have our week two picks delivered directly to your inbox next Friday!