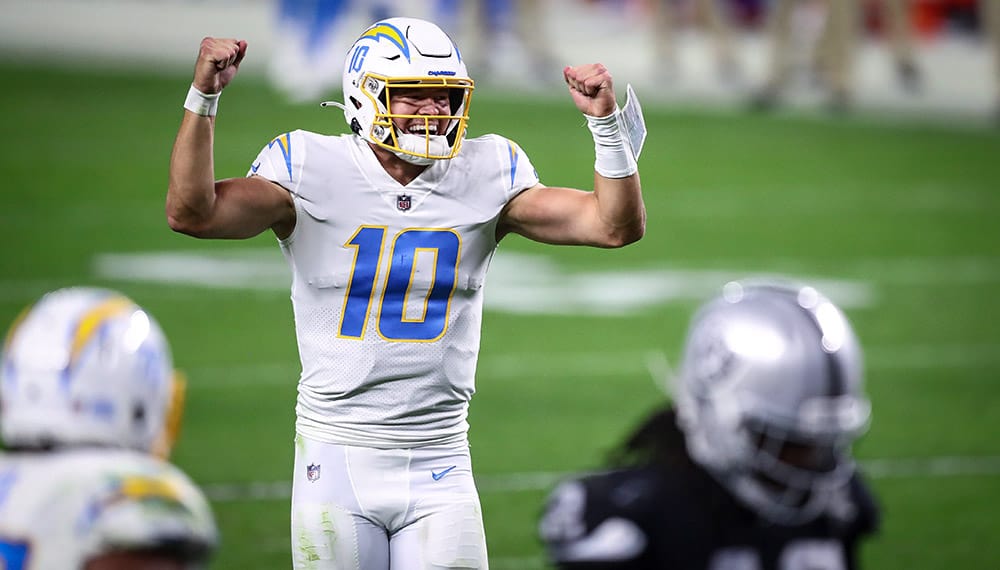 The NFL regular season wraps up with a fantastic AFC West matchup between the Los Angeles Chargers and Las Vegas Raiders. The stakes are high for this game, as the winner punches their ticket to the playoffs while the loser gets to make early vacation plans.

The Chargers won the first meeting between these two teams back in Week 4 by two touchdowns. Will the Raiders be able to get some sweet revenge? Here are five player prop bets for this fabulous Sunday Night Football matchup.

We love watching Herbert throw the football! This guy throws a tight spiral and can fit the ball into the tightest of windows. However, this passing yardage total seems a bit high.

The first reason we love this prop has to do with current form. Herbert is averaging over 289 passing yards per game this season, but he’s thrown for 275 yards or less in three out of his last four games.

The Chargers haven’t been asking Herbert to chuck the ball around 40 or more times per game as they did earlier in the year. RB Austin Ekeler is looking healthier and the Chargers are running the ball a bit more. This helps our case for the Under.

Another reason to like this prop bet to stay under has to do with the underrated Las Vegas defense. The Raiders aren’t elite on the defensive side of the ball, but they aren’t pushovers either. This group ranks 10th in yards per pass allowed (6.3) and passing yards per game allowed (214.6).

We think Herbert has a nice game on Sunday Night, but we think he tops out at around 250 passing yards. Take the Under!

Why the heck is this number so low? Sure, Jacobs is listed as questionable with a ribs injury but we all know he’ll be playing since a playoff berth is on the line. Even though he’s been hampered by injuries, the former Alabama star has run for 740 yards and 8 TDs this season.

Our main reason for playing this prop has to do with the awful Chargers rush defense. We’ve made some decent money fading this Los Angeles front seven this year and this seems like another great opportunity to do so. The Chargers allow 4.6 yards per rush (27th) and 136.7 rushing yards per game (30th).

Jacobs is in pretty good current form, as he ran for 63 yards against the Colts last week. He also went off against the Broncos for 129 yards in Week 16. We expect Jacobs to gain at least 80 rushing yards in this game so take the Over!

Here’s another prop that we feel has some good value. Keenan Allen may be Justin Herbert’s favorite target but Mike Williams is the Chargers’ go-to guy down around the goal line. At 6-4 and 218 pounds, Williams is tough to defend and can go up and get the ball better than anyone.

The former Clemson star has racked up 1,027 receiving yards and 8 TDs this season. We think Williams has a great chance of getting his ninth TD of the year in this game, even against the underrated Raiders secondary.

The Chargers do an excellent job of scoring touchdowns once they reach the red zone (8th). This means they shouldn’t have to settle for many field goals in this game, especially since the Raiders rank dead last in red-zone defense. This makes us like this Williams TD prop even more.

Derek Carr is having the most productive season of his NFL career. A big reason why is Hunter Renfrow, who has caught 99 passes for 1,025 yards and 7 TDs this year. The former Clemson star does a great job of finding the empty spaces in the zone.

Renfrow has been carrying the bulk of the receiving load for Las Vegas ever since superstar tight end Darren Waller went down with an IT band injury. Waller is expected to be back for this game but you have to wonder how many snaps he’ll be able to play after such a long layoff. We still think Renfrow will be Carr’s primary receiving target in this game.

Renfrow is averaging 64.1 receiving yards per game this season so there seems to be enough value to play the Over on this receiving yardage prop. The Chargers secondary ranks 23rd in yards per pass allowed. Renfrow could have a big game in the most important game of the regular season.

This one is a bit juicy but we still think it’s a good prop bet to play. Allen has been a pass-catching machine all season long for this Chargers offense. The former Cal star has hauled in 100 receptions for 1,086 yards and 6 TDs this season.

The Chargers love to throw the football, as they call passing plays on 61.35% of their snaps. This makes us think that Allen should have plenty of targets in this game.

Allen is coming off back-to-back subpar performances so he’ll be hungry to get back to his dominant ways. We could easily see Allen bringing in 8 or more receptions in this game. Best of luck with all your Sunday Night Football action.