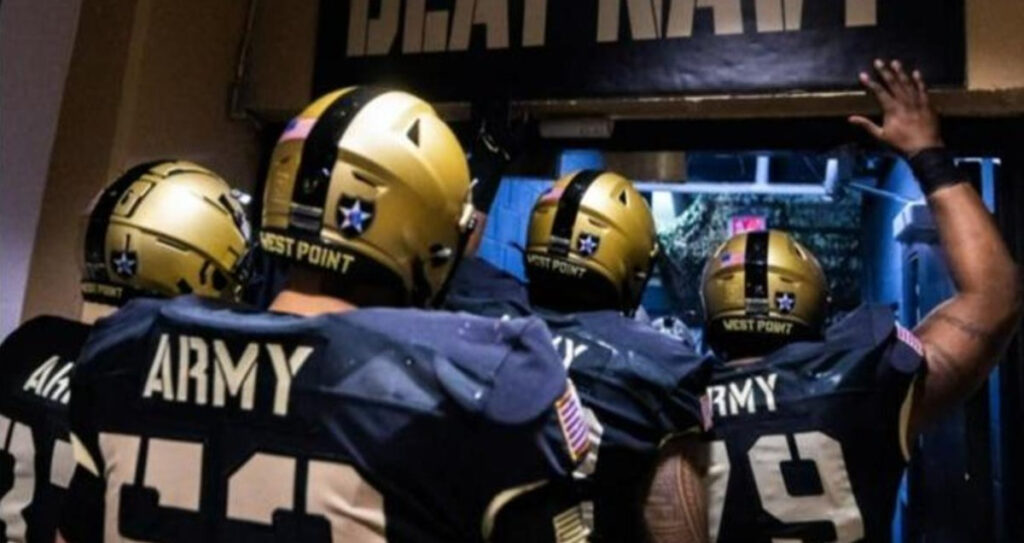 Last Saturday's Army vs. Navy game ended in heartbreak for those who bet on the Under!

It's Monday, so it's time to look at the bad beats from the football weekend! Unfortunately for sports bettors, bad beats happen pretty often, even with a smaller slate of games.

For whatever reason, gamblers tend to remember the unlucky beats and conveniently forget the times when they cashed tickets that they probably shouldn't have. Several psychologists have published pieces on how financial losses hurt more than gains feel good. So, if you're lamenting one of these bad beats, take solace in the fact that you're a normal human being.

Here are 2 bad beats that made bettors sick in both the NFL and CFB. If you had either or both of these plays from the CFB Week 15 / NFL Week 14 card, you're in our thoughts and prayers!

FOR THE FIRST TIME IN 17 YEARS ARMY NAVY GOES OVER THE TOTAL 😱 pic.twitter.com/1myrWaGrkB

Army / Navy Goes Over the Total in Heartbreaking Fashion

With only 1 game on the college football slate, we were guessing that there wouldn't be any CFB bad beats this week! Boy, were we ever wrong! A ton of bettors were on the Under, and for good reason: The game had gone under for 16 straight years!

So, did this year's version follow the same fate? In the famous words of Lee Corso, "Not so fast, my friend!" The total closed at 32 points at Caesars, WynnBet, and a whole slew of other sportsbooks.

The game looked like a dead nuts Under as neither team scored in the first quarter! Bijan Nichols got Navy on the board with a 44-yard field goal early in the second quarter. Under bettors weren't panicking, though, even after Jabril Williams ran back a blocked punt for a touchdown just before halftime.

Army led 10-7 at the break, and most Under bettors probably thought they were home free. The third quarter was somewhat uneventful until Anton Hall Jr broke a 77-yard touchdown run to give Navy a 10-7 advantage.

Heading into the fourth quarter, those with an Under ticket in their pockets were still feeling pretty good. We've all been there, thinking, "the only thing that can sink this Under bet is overtime." Well, unfortunately, that's exactly what happened.

Quinn Maretzki nailed a 37-yard field goal to knot the game at 10-10. A crazy thing happened in overtime! Both teams looked like scoring juggernauts.

Army scored on their first play with a 25-yard TD run by Markel Johnson. While Under bettors prayed for a turnover or a defensive stand, Navy busted the Under with a 25-yard TD pass from Xavier Arline to Maquel Haywood. Army ended up winning the game in the 2nd overtime, but by then, all of the people holding Under tickets had checked into the Heartbreak Hotel.

I didn't bet on the Army/Navy game, but yours truly was on this bad beat! The worst part is I did the "smart thing" and played Kansas City on the look-ahead line at (-7). I felt great when the line closed Chiefs (-9), but as we all know, closing line value doesn't pay the bills.

I'm not going to lie; I thought this game was in the bag when Patrick Mahomes hit Jerick McKinnon for back-to-back touchdown passes to put the Chiefs up 20-0. Unfortunately, that's when Kansas City decided to go into the Prevent defense (did I mention that I hate the Prevent defense?)!

After the defensive scheme change, Russell Wilson threw 3 quick TD passes to bring the score to 27-21. Mahomes hit Juju Smith-Schuster for a 4-yard TD to reclaim the cover, but I knew we were TOAST at that point. Backup QB Brett Rypien threw a 7-yard TD pass to Jerry Jeudy to get Denver the cover in the 4th quarter.

This was a sick beat, to be sure. Maybe not as bad as the Army/Navy one, but let's just say that Chiefs defensive coordinator Steve Spagnuolo isn't on my Christmas card list this year.