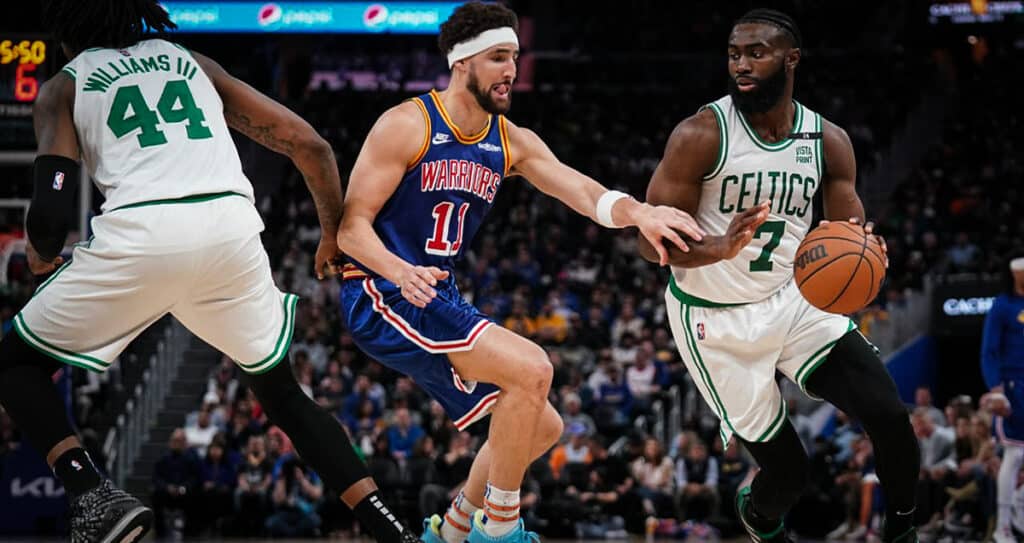 Klay Thompson and the Warriors enter game 1 as 3.5 point favorites over the Celtics.
By Nicholas Berault on June 2, 2022

It’s official, the 2022 NBA Finals will feature the Boston Celtics and Golden State Warriors. Despite neither of these two teams being the top seeds in their conference, it does feel as though the cream has risen to the top with the Larry O’Brien trophy on the line.

Golden State had the better regular season record by two games, and both teams led their conferences with over 7 points per game in positive scoring margin. These teams traded road wins during their two regular season matchups, the most recent of which resulted in a lopsided Celtics win on March 16 in a game that the Warriors only managed 88 points. We’ll build off this kind of defensive focus for Boston in our best bets for Game 1.

Boston cruised to a series sweep over the Brooklyn Nets in the first round before seven-game battles in which they prevailed over the Milwaukee Bucks in the conference semifinals and the Miami Heat in the conference finals. The Celtics were behind in both of those series through the first three games, and ended up winning Game 7s both on their home floor against Milwaukee and on the road against Miami. Their net margin through 18 games this postseason is +6.1 points per game.

The Warriors route the the Finals included a 4-1 series win over the Denver Nuggets in the first round, a hard-fought 4-2 series win over the Ja Morant-less Memphis Grizzlies, and a relatively easy disposal of the Dallas Mavericks in 5 games to reach this stage. Their net margin through 16 playoff games is +5.4 points per game, and they’ve been off since a series-clinching win against Dallas on May 26.

Live Odds for Game 1 of the NBA Finals

The Golden State Warriors opened as a 3.5 point favorite for game 1 of the 2022 NBA Finals, and that is where most books have the game priced today. FanDuel has taken enough Golden State money to move the Celtics to +4, and it wouldn't shock us to see the majority of the market move there before tip given how weighted the money is to the Warriors at the moment.

The total opened at 210.5 and has drifted up all week, but has seemed to have settled in at 212.5 at most U.S. sportsbooks. These two teams have averaged 218.6 PPG in their last 5 matchups and the average total in the Chase Center is 217.1 PPG. Here are the best odds currently available for tonight's game 1:

The Warriors come into Game 1 more rested than the Celtics after a 6-day layoff following their elimination of the Mavericks in five games. The longstanding debate of more rest vs. less rust is in play again for the start of this NBA Finals. The Celtics have played two more games this postseason than the Warriors and starting center Robert Williams is still listed as Day-to-Day headed into tonight’s matchup.

Boston is allowing the second lowest three-point shooting percentage among all teams during the playoffs, and in turn have only allowed opponents to average 101 points per game through 18 contests. There always has to be some caution taking an underdog on the Warriors home floor, and we’ll see if the Celtics can continue their strong defensive run to keep this game close.

Boston has held opponents under 100 points six times in the 2022 playoffs, including three of the last four games against the Miami Heat. While Miami may not be a great comparison to Golden State at first glance, they led the NBA in three-point shooting percentage during the regular season and only averaged 0.7 less made three-pointers per game than the Warriors.

The difference between these two Celtics’ opponents in the postseason is that Golden State has maintained their high rate of making threes and the Heat faltered to shoot just 30% from beyond the arc in the conference finals. That can be chalked up to poor shooting, but also Boston’s defensive effort at the three-point line. We look for another strong effort from Boston to contain the Warriors in Game 1 and give them the best chance take home court advantage in the series.