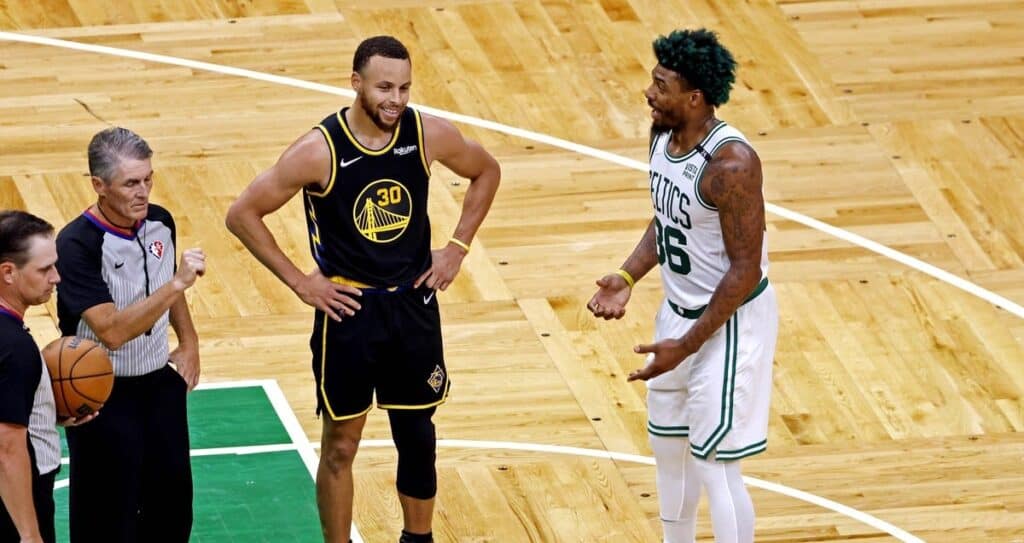 Can Marcus Smart and the Celtics slow down Steph Curry and the Warriors in Game 5?
By Nicholas Berault on June 13, 2022

After the first four games of the 2022 NBA Finals, the series is knotted at two games each and the Warriors hold a one-point advantage in net scoring margin, 422-421. The teams have traded 1-1 records on each other’s home floors, and the all-important Game 5 will take place Monday night in San Francisco.

In the current home/away format of the NBA playoffs (2-2-1-1-1), the winner of Game 5 has gone on to win the series 187 out of 221 times, according to Basketball-Reference. That's almost an 85% historical probability that Monday night’s winning team will be this year’s NBA Champion, and the Warriors enter as narrow favorites of 3.5 points.

Prior to this series being level, the Warriors won outright in Game 4 as underdogs in large part due to a transcendent offensive display from Steph Curry. He scored 43 points on 14-for-26 shooting, including seven made three-pointers, and grabbed 10 rebounds to lead his team to a 10-point victory in a hostile TD Garden. Golden State, who trailed at halftime for the third time in four games on Friday, has outscored Boston by a combined 49 points in the third quarter of games this series.

The Celtics struggled in the second half and even more so down the stretch in the fourth quarter. Boston managed to score just 3 of the game’s last 20 points on an Al Horford three, their lone field goal of the last five minutes in the game. Overall, Jayson Tatum scored 23 points on as many shots to lead the Celtics and add to his playoff-leading 575 points in 2022.

After going 2-0 on best bets again in Game 4, our NBA Finals record stands at 6-2 overall. We look to add to that win total in Game 5 with two more plays.

Best Prop Offers for Game 5 of the NBA Finals

After a 10-point win on the road in Game 4, the Warriors are back at home for Game 5. At the time of publishing, DraftKings has Golden State -3.5 still available, while Unibet has the best Celtics number available (+4 at -110).

The total is currently sitting at 210.5 at most online sportsbooks. Here are the live odds for Game 5:

The point spread has not factored into any of the outcomes from the four games of this series so far. The average margin of victory has been more than 14 points per game, and each game has ended with the winning team up by at least 10 points. Boston boasts an 8-3 record in road playoff games this season, an improvement compared to their home record of 6-5.

Golden State is a formidable 10-1 at home this postseason, though their lone loss was to the Celtics in Finals Game 1. We also do not find their previous opponents in Denver, Memphis, and Dallas to be fair comparisons with the Eastern Conference champions. We’ll go against the Warriors' home-court advantage in Game 5 and take Boston on the moneyline.

Our first bet to go over the total in this series, we’re basing this pick on a couple of trends. The point total results have alternated in each game this series, and we’re coming off the under-cashing in Game 4.

Boston is averaging 111 points per game this postseason after a loss, and coincidentally the Warriors have matched that scoring average after a victory in the previous game. We’re anticipating a higher-scoring game from both teams in Game 5. Give us the over on Monday night.