Celtics at Heat: Best Bets and Player Props for Game 1 of ECF 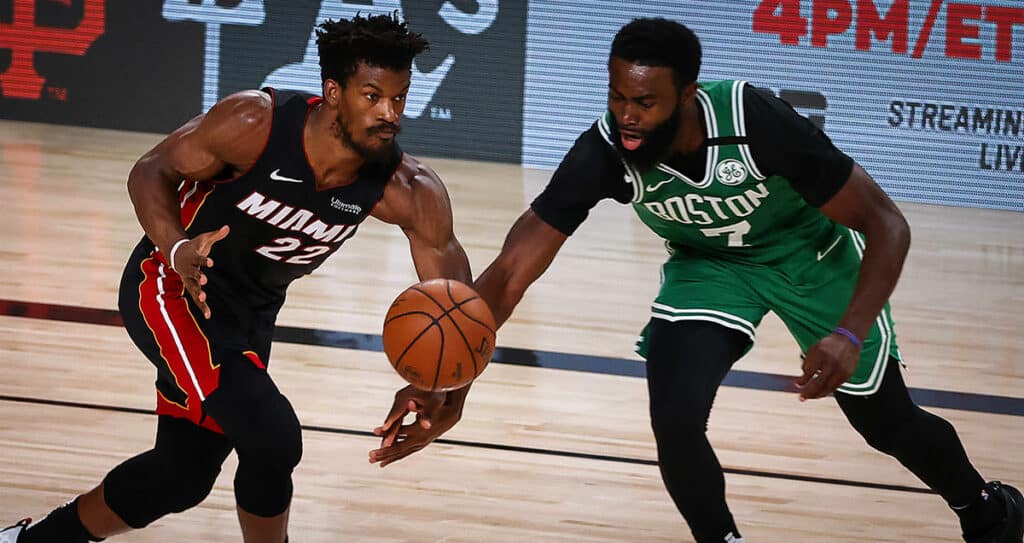 Look for Jimmy Butler to outscore Jaylen Brown in game 1 of the Eastern Conference Finals.
By Nicholas Berault on May 17, 2022

The Celtics and Heat will meet in the 2022 Eastern Conference Finals in a rematch of the 2020 ECF in the bubble. The Heat prevailed in six games before going on to lose to the Lakers in the NBA Finals. Though the players on the court have changed, except for the ageless Udonis Haslem, the rivalry between these two teams feels similar to the Big Three era from 2010-2014.

It has seemed almost inevitable that this matchup would determine the team from the East that plays for a championship. The Heat easily disposed of the Hawks in the first round and took charge against the 76ers in the conference semifinals after Joel Embiid’s return gave Philadelphia some hope through four games. Meanwhile, Boston swept the volatile Brooklyn Nets in the first round before besting Milwaukee in seven games to arrive here.

The next generation of stars for both the Heat and Celtics have brought their teams to the precipice of a title shot, and it’s expected to be a difficult, drawn-out series. DraftKings series result odds have Celtics in 6 (+265) and Heat in 7 (+390) as the two most likely outcomes in the latest clash of these Eastern Conference giants.

We’ve got a best bet for the game and player props lined up to kick it off.

Miami will have had four full rest days in between series to Boston’s one when this game tips off. While Boston is still the favorite to win the series with oddsmakers, Miami should be in a better position to start strong in terms of recent off days and playing on their home court.

The Heat are a perfect 6-0 so far this postseason at home. While the fans are still trickling into the arena, the Heat will jump out to a first-half lead and maintain that into halftime.

We opted to pass on the total for Game 1. However, we did find a couple of prop bets that we think are worth adding to your betting portfolio.

Butler has eclipsed the 30-point mark five times this postseason, including three of his last four games. While Jaylen Brown is one of our favorite Finals MVP bets, he has reached 30 points on the number just once in the first two series.

Butler’s consistency in scoring at a high rate has been impressive, headlined by a 40-point performance in each series so far. He’s attempted 20 or more shots six times in 10 games, while Brown has just once in 11 games during these playoffs. We’ll ride the hot hand and take Butler to pick up where he left off and outscore Brown in Game 1.

Horford’s resurgence in this Celtics playoff run has been entertaining to say the least. He scored 30 points in Boston’s Game 4 win on the road in Milwaukee and averaged over 10 rebounds per game in the series.

The former Florida Gator will need to maintain that level of intensity under the basket to put up with the likes of Bam Adebayo, who has recently looked like the only player that could handle Joel Embiid one on one. We expect the veteran to continue his strong playoff form and secure double-digit rebounds Tuesday night.