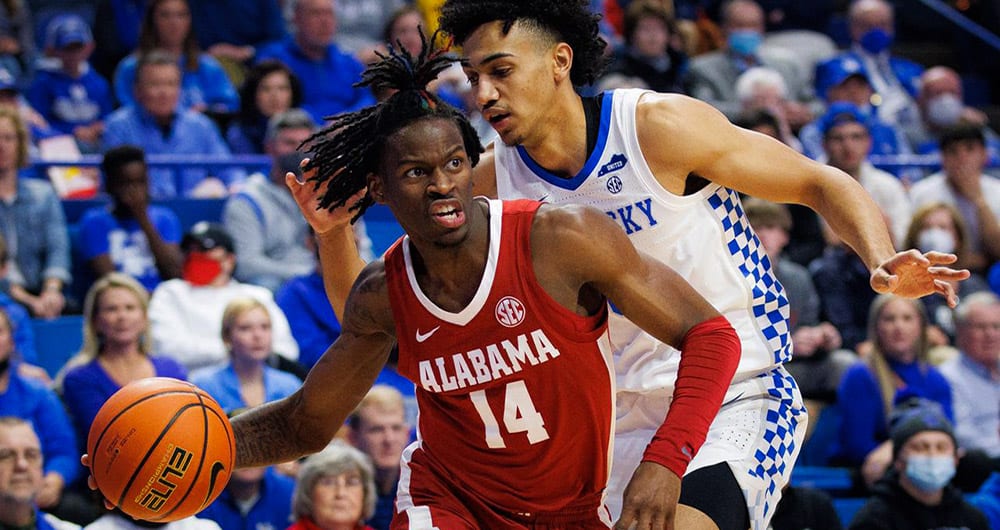 The NBA All Star hiatus gives many basketball fans a chance to catch up on their college hoops each year, and our Tuesday night picks will shift that focus to a pair of lesser schools. Of course, we have to cover the SEC as well, which, with 6 teams in the current Pomeroy top 20, seems to have a monster matchup on a nightly basis.

Looking for even more of our picks for a Tuesday night with no NBA? Check out our NHL Best Bets and Prop Bet Picks for the 6 game slate on ESPN+. As a reminder, you can find NBA, NHL, and CBB player props on a nightly basis on Underdog Fantasy.

Included with each of our picks is a live look at the best odds available for both teams' spread, moneyline, as well as the game's total. Shop every CBB on tonight's slate with our free odds tool.

The Toledo Rockets (21-6, 13-3) head to Kalamazoo to face Western Michigan (6-21, 2-14) on Tuesday night to take on the Broncos in a rematch from their previous meeting in late December. The Rockets smacked the Broncos at home 83-56 in the 1st matchup. The Rockets dominated the turnover battle, causing the Broncos to turn it over 17 times compared to just 5 of their own. WMU was also held to 10.5% shooting from distance and Toledo was able to shoot 45.7% overall from the field.

Toledo currently sits in 2nd place in the MAC standings. They, along with Ohio, Kent St, Buffalo and Akron, are all jockeying for position as the rest of the conference is a handful of wins behind. These tight standings leave little room for error for a team like Toledo on these road trips against inferior opponents. They almost stumbled in their last game at home against the Chippewas.

Western Michigan was 0-13 in the MAC prior to their home game on February 12th against Central Michigan. The Broncos rolled to a 14-point win and followed that up with a 4-point win over visiting Zips of Akron. After back-to-back wins, the Broncos were brought back to reality on the road against a very good Buffalo team.

Here's a look at some of the key betting trends behind this lopsided MAC showdown:

The wind was taken out of the sails of WMU by Buffalo. I do not see them getting up for this game. The Rockets will be prepared as they can ill-afford to take a loss down the stretch. The scare from CMU on Saturday will serve as a blessing to this Toledo team to not take WMU for granted. They dominate this one from start to finish and win by 15+.

CBB Pick of the Night: Charleston Cougars (-1) at Northeastern Huskies

Tuesday night the Charleston Cougars (14-12, 6-8) face off with the Northeastern Huskies (1-19, 1-14). Charleston took the 1st game by the score of 81-63. The final score was a bit deceiving as it was a 4-point game with under 5-minutes to play. From there, the Cougars went on a 19-5 run to end the game and send the Huskies home with their tails between their legs. The Cougars forced 18 turnovers in the previous meeting, which played a large part in the outcome.

The Cougars are coming off a rough home loss 80-77 to Towson on Saturday. The Cougars led by 7 at the break, only to see that evaporate late in the 2nd half and missed key shots late allowing the Tigers to steal the road game. Despite shooting over 50% from the field as a team, the Cougars found a way to turn the ball over 19 times in the loss. John Meeks was unavailable for the game and his absence was felt late as the Cougars did not have a go-to guy in the clutch. Dimitrius Underwood did all he could, scoring 21 points and grabbing 11 boards in the loss.

The Huskies have had a season to forget this year. They are dead last in the current CAA standings and will be the only team to miss the conference tournament. Oddly enough, their lone win in conference came against the same Towson team that just handed the Cougars their latest loss.

Here's a look at some of the key betting trends for these two Colonial teams:

The Huskies poured what I believe was everything they had left in their tanks against Hofstra on Saturday. Charleston still has plenty to play for and should be able to handle this Huskies team. While the previous meeting was close throughout, I don’t believe that to be the case here. The Cougars should take control rather early and be able to coast to a win here.

The Tide may be ranked 24th in the country and the Commodores remain unranked, they are separated in the SEC standings by just 1 game. Seeds 5 through 12 are all up for grabs in a tightly packed middle of the SEC standings. The 12 seed would play the 13th seed for the right to face the 5th seed in the 2nd round. With the 11th seed looming for the Commodores, they will want to get a win or two in order to avoid a play in game.

Bama loves to fall in love with the three-ball but shoot one of the worst percentages in the country from deep. Vandy is one of the best teams at getting to the foul line and Bama struggles keeping opponents from getting to the line. This should prove to be a difference maker in this one as we will gladly take the 4 points iwth Vanderbilt.

Here are some of the betting trends backing up this Vanderbilt pick: