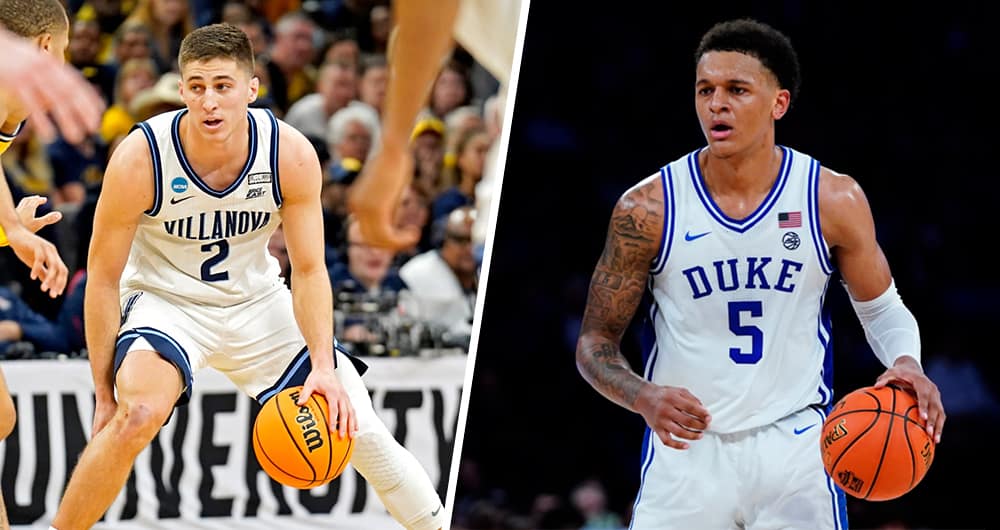 We are half way to our Elite 8 being decided as I write this on Friday. Thursday tipped off with 2 extremely exciting Sweet 16 matchups that finished with the overall #1 seed going down and Villanova getting the victory in the rematch of the 2018 National Championship.

In the nightcap, yet another #1 seed bit the bullet when the Houston Cougars used their suffocating defense to hold the #1 scoring team in the country, 24 points below their average. And to Texas Tech backers’ dismay, myself included, Coach K’s Blue Devils snuck by the Red Raiders and advanced.

Saturday, we get treated to a matchup of what could be the most disciplined offense versus the most disciplined defense with Villanova meeting Houston. That will be followed by the Hogs and Blue Devils in what could be the most evenly matched game of the Elite 8. We will share our best bet for both of Saturday's Elite 8 matchups in this article and be sure to check out our favorite Elite 8 player props as well.

Houston controlled the tempo the entire game against the top seeded Arizona Wildcats on Thursday night. They held Bennedict Mathurin to just 4 of 14 shooting and the entire Arizona team to just 33.3% from the field. Jamal Shead and Kyler Edwards were tremendous on both sides of the floor. They combined for 40 points, 9 boards, and 9 assists.

Villanova struggled a bit on the offensive end against the Wolverines, but their defense made up for the offensive struggles. Despite being undersized, especially against the 7-footer, Hunter Dickinson, the Wildcats were able to speed up their defensive rotations, contest all shots, and hold Michigan to single shot possessions. Jermaine Samuels was the surprise higher scorer finishing with 22 points. He added 7 boards, 2 steals, and 2 blocked shots in the win.

Here are some of the key betting trends for the first of four elite 8 games:

Houston is incredible in all aspects of defensive with the exception of one important piece. They are near the bottom in the country in keeping opponents off the foul line. That will be a major problem against this Villanova team that will look to take advantage of that by having their guards post up and attack the basket.

Allowing these Cats to get to the foul line, is almost the equivalent of conceding a basket. They are the best foul shooting team, not only in the country, not only in Villanova history, but in the history of the NCAA. Close games favor the Cats and I believe they survive this one and advance. Take the 2.5 points with the higher seed here.

Arkansas has already proven they can beat any team in the country by dispatching Gonzaga on Thursday night. They held Chet Holmgren, the future top pick in the NBA Draft, to just 11 points. The Zags, as a team, were only able to shoot 37.5% from the field against the Hogs defense. JD Notae continued his spectacular play as he went for 21 points, 6 boards, and 6 assists. Jaylen Williams has been their x-factor and was pivotal in keeping Holmgren in check.

Duke played the best 2 minutes of basketball they played all season in the final minutes Thursday night. And it paid off as they needed exactly that to squeak by the Red Raiders. Paolo Banchero rose to the occasion, knocking down timely buckets and causing turnovers. He finished with 22 points and was 7 of 12 from the field. Duke’s x-fact, Mark Williams was a force in the paint and Jeremy Roach led the Blue Devils from a floor general perspective.

Here are some of the key betting trends we're eyeing ahead of Saturday's matchup between the Razorbacks and Blue Devils:

Duke had all they could handle against Texas Tech. The game was punishing throughout and the defense of the Red Raiders was almost enough to top Duke. Saturday night, their legs and psyche will be diminished quicker as they have not had much recovery time. I expect Arkansas to pressure the Blue Devils all game and get this one to turn into a fast tempo type of game. Take the four points, but Arkansas is certainly a live dog here, making the +155 moneyline incredibly tempting.