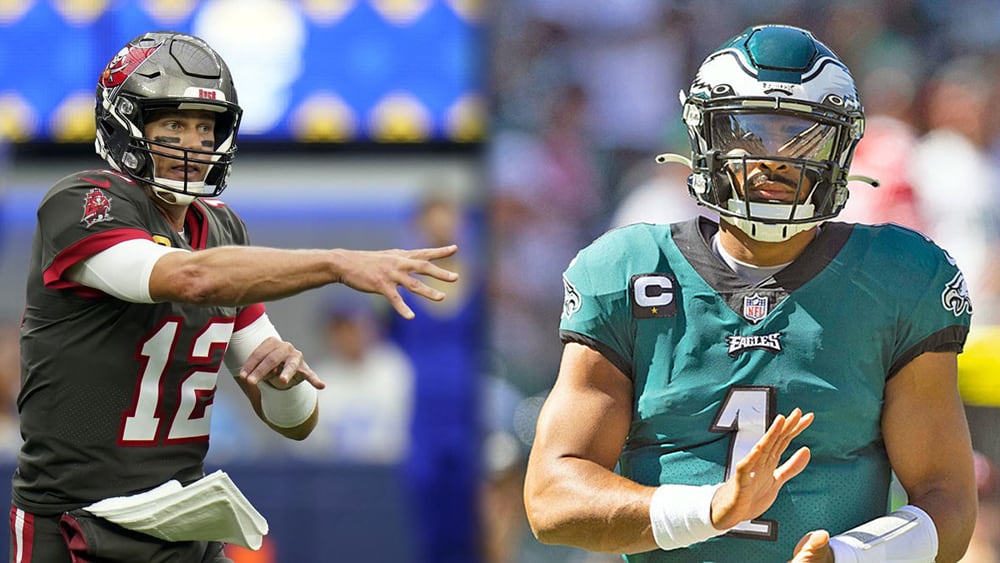 Buccaneers at Eagles - Best Spread and Prop Bet for TNF

The Week 6 Thursday Night Football matchup features the 4-1 Bucs at the 2-3 Eagles and it looks like the road dog is going to be a popular bet in this one.

For those of you that saw our Week 6 Odds and Best Bets article, you know where we are leaning. For those that haven't, here is an in-depth look at how we expect this game to play out, what our pick for best bet is, and one player prop that is worth targeting.

PointsBet is offering all new players an instant $200 bonus with any $20 TNF wager. Here is how the offer works:

The look-ahead number for this matchup was set at Eagles +7, the game opened at Eagles +6.5 after they won in Carolina, and that is where the number currently sits at most sportsbooks. The total has seen a little more movement, opening at a consensus of 53 points, being bet down to as low as 50.5, before settling at 52.

Jalen Hurts’s Eagles are in for a tough night this Thursday, when Philadelphia hosts the defending champion Tampa Bay Buccaneers for TNF. Tampa enters week 6 coming off another huge offensive performance beating Miami 45-17 as 11-point favorites.

Bruce Arians’ Bucs are 4-1 since the start of the season with the lone loss coming against the LA Rams. The Eagles are coming into Thursday Night Football off an upset of Carolina as 2.5-point underdogs.

What to Expect from the Bucs on TNF

Tom Brady did it again in week 5. The greatest QB of all time is coming off a monster 411-yard, five-touchdown performance against Miami with no interceptions. At age 44, Brady shows no signs of slowing down and while Tampa let Miami stay within striking distance for most of the game, a 21-point fourth-quarter sealed the fate of the contest.

The WR trio of Godwin – Evans – Brown combined for over 300 air yards and 20 receptions. Sunday night was a record-setting evening for both Brady and Brown as both players had their longest completion since 2018 when Brady found AB for a 62-yard TD pass.

After five weeks, the Buccaneers defense leads the league in average yards per carry allowed at just 2.9 yards. Tampa has only given up 229 total rushing yards and one rushing TD so far. Both marks are the best in the league.

It is important to note, that Tampa’s pass defense is also grading better than it has been last year. Opposing teams are only reaching first downs on 17.7% of the time on their rushing plays against the Buccaneers.

We must mention that the champions have been also getting more consistent on the offensive end. Tom Brady is averaging a 0.3 yards higher average depth of target combined with a 43% pass completion rate (up from 38% in 2020). The already mentioned receiving trio is reaching first downs on a whopping 65% of successful receptions, up from their 58% average last year.

What to Expect from the Chiefs on TNF?

The road team having elite run defense should be a deciding factor on Thursday, as the Eagles are a top-five rushing attack in the league, thanks in large part to Hurts' 51+ YPG. Philadelphia is averaging 5.2 yards per carry (the 4th highest in the NFL). The Eagles are also reaching first downs via the run at the third-highest rate in the league (30.1%). What will happen if Tampa Bay successfully takes away their legs?

QB Jalen Hurts is coming off another extremely mediocre game and being too conservative has been a consistent issue for the 23-year-old. On Sunday, Hurts has been averaging only 5.4 yards per passing attempt against Carolina and attempted only seven passes that were intended to go deeper than 10 yards.

Philly’s receivers are also not bailing their QB out averaging just 11.6 yards per reception holding a 49% first-down rate (9th worst in the league). We are not huge believers that such a lackluster passing game is able to perform well against a Tampa Bay team that averages north of 33 points per game.

Give us Tampa Bay against the spread! Our model makes this spread 8.26 points going into Thursday night and we are ready to back the Buccaneers if we have to lay 7 points or less. Get in as early as possible as we could see this spread getting to 7.5 points before kick-off!

It took about a half-second of thought to jump on this number. We have seen opposing teams avoid the Bucs' rush defense altogether this season. On the season, Tampa has faced only 66 RB attempts and it is not like they have played a soft schedule. They have already faced the Rams and Cowboys, two of the better running teams in the NFL.

We expect Philly to be trailing early here, which would also shift the snap count in favor of Kenneth Gainwell, even further limiting Sanders' opportunities to hit 63.5 total yards. If Sanders were to get to 63.5, it would be through the air, where the Bucs are giving up 50+ YPG to opposing RB's. The issue there is that Gainwell has more targets, yards, and receptions on the season. Give us the under at -110 for Sanders!