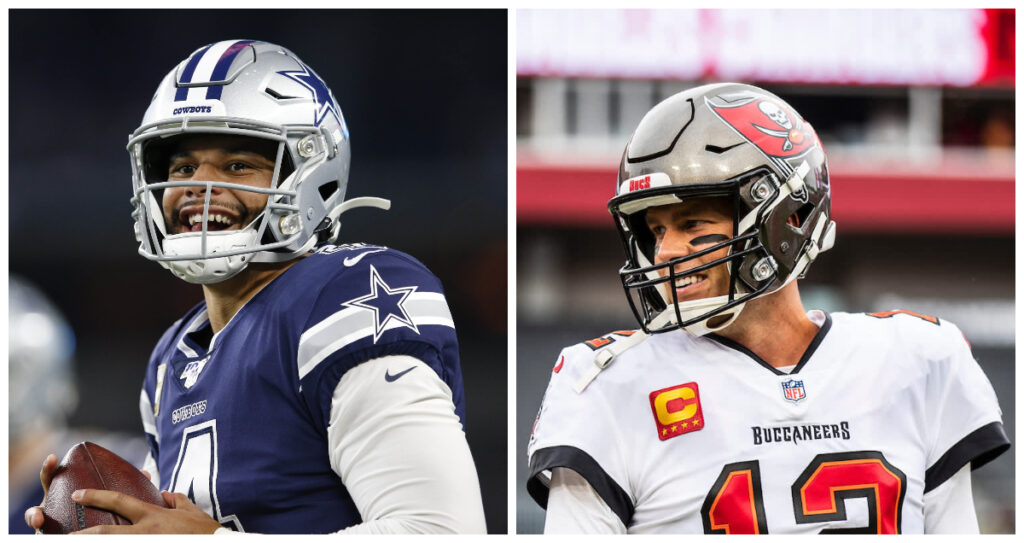 Dak Prescott squares off against Tom Brady as the Buccaneers meet the Cowboys on Sunday Night Football.

This season’s NFL kickoff week is packed with a group of games that qualify for a primetime TV slot, but the Week 1 Sunday Night Football distinction was given to the Tampa Bay Buccaneers traveling to Dallas to take on the Cowboys. It somewhat resembles a home and home series in college football after the Bucs hosted Dallas to start their 2021 seasons in another primetime showdown.

Both teams return a lot of talent at the skill positions and on defense, though they each have their concerns as the 2022 season begins. The Cowboys need to replace both offensive tackles, with Tyron Smith suffering a season-ending injury a few weeks ago and La’el Collins signing with the Cincinnati Bengals in free agency.

The Buccaneers had a roller coaster offseason that saw Bruce Arians ousted in favor of Todd Bowles and Tom Brady retired, then unretired, and subsequently missed 11 days of training camp for undisclosed reasons. Both of these situations create additional uncertainty for teams with playoff and even Super Bowl expectations in 2022. Ahead of their Sunday night matchup, let’s take a look at how to bet this game between two NFC powers.

This pick comes down to the fact that arguably the Cowboys' biggest strength for the last five or more seasons, their offensive line, has not had to replace this many key players year over year in that time. The loss of La’el Collins in free agency was a decision that was completely in the hands of the team, and one they had the chance to prepare for coming into Week 1.

Tyron Smith’s torn hamstring in training camp is not something that Dallas had anticipated and that void now leaves the blind side of quarterback Dak Prescott as a concern. The Cowboys drafted Tyler Smith in the first round, an offensive tackle from Tulsa, who will likely step into that key role from the first snap this season.

Third-year tackle Terence Steele, the team’s 2020 signing as an undrafted rookie, is slated to start at right tackle. This gives the team a pair of inexperienced tackles to anchor an offensive line that prides itself on establishing the run and then connecting down the field with pass catchers like CeeDee Lamb and Dalton Schultz. When that strength becomes a weakness, and a team like Tampa Bay only needs to win by a field goal, we’ll take the Bucs to cover the 2.5.

This game has been in the spotlight for some time now, and finding value is going to be a difficult task, let alone picking the ride sides. The total has moved down from the opening number of 52, and missing out on the key number of 51 isn’t ideal. However, we lean under here with the expectation of a poorer offensive line performance from Dallas and the theory that Brady is entering the season with less preparation than in past years.

Michael Gallup will miss the season opener for the Cowboys and Chris Godwin is questionable with a decent chance to play, for the Buccaneers. All of this adds up to a matchup where we think scoring will be had, but not above the posted total of 50.5. Take the Under!