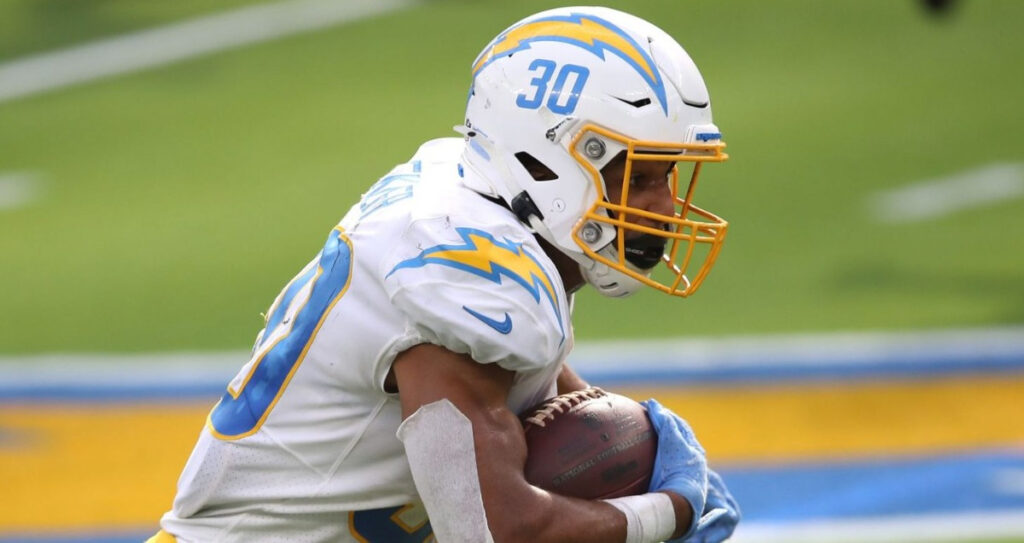 We think the Broncos should be able to contain Austin Ekeler on Monday Night Football.

Week 6 of the NFL season wraps up with an AFC West rivalry game between the Denver Broncos and Los Angeles Chargers. Neither team has quite found its footing and both trail the Kansas City Chiefs in the division standings. However, the winner of this game will be right back in the thick of things.

The Chargers are currently listed as a 4.5-point favorite over the Broncos and the total is sitting at 46 points. Here are 4 player prop bets for Broncos at Chargers. Also, don't forget to check out our Monday Night Football best bet.

Mr. Wilson has gotten off to a rough start in Denver, as he's only thrown for 1,254 yards and four touchdowns. The former Seahawk has thrown three interceptions and has a pitiful QB rating of 36.3 (24th in the league). Denver's offense has been so bad that they've been booed on multiple occasions on their own home field.

So, with all that being said, why are we playing the Over? Well, for as bad as Wilson has played, he's still gone over this passing yardage total in three out of five games this season. His sore shoulder is also getting better, according to multiple reports.

The Chargers' secondary is decent but they aren't world-beaters. Los Angeles ranks 20th in EPA per pass allowed and 24th in opponent completion percentage (67.22%). At some point, Russ is going to find some sort of rhythm with Courtland Sutton and Jerry Jeudy. Wilson is 91-72 to the Over in his career against his passing yardage total.

Ekeler finally broke through for a huge game against the Browns last week, but we think he comes back down to earth in this game. Even with that stellar rushing performance, the Chargers still rank 27th in EPA per rush and yards per rush (3.9). The Chargers' offensive line has had trouble generating any consistent type of push and Ekeler has stayed Under this rushing yardage total in three of five games.

Denver has been slightly above average against the run this season, as they rank 13th in EPA run defense and 14th in rushing yards allowed per game (112.4). We expect DJ Jones and Bradley Chubb to keep Ekeler from breaking any long runs on Monday night.

For his career, Ekeler has gone Under this rushing yardage total in 59 out of 77 games. Granted, in some of those games he wasn't a full-time player, but the stat is still pretty telling. We'll take a shot with the Under!

This is correlated with our Ekeler rushing yardage Under play and we think it's worth jumping on at plus-money odds. We already mentioned how ineffective the Chargers have been on the ground this season. We don't see that changing tonight against the Broncos.

Los Angeles only runs the ball on 38.44% of its plays, which only ranks 19th in the league. Ekeler is still the Chargers' feature back but he's been sharing more and more carries with Joshua Kelley of late and was only in on 59% of the team's snaps last week.

Ekeler has gone Under this number of rushing attempts in 9 of his last 16 games. The Chargers prefer to air it out with Justin Herbert and his big-time arm, which is understandable. Ekeler has also gone Under 13.5 carries in 60 of his 77 career games, so we don't mind backing that solid trend.

We'll come back to the well with Wilson and his rushing yardage for our final pick of the evening. Wilson's gone over this rushing yardage total in three straight games and we think he could do some damage against a Chargers rush defense that ranks dead last in yards per rush allowed (5.8).

The Broncos offensive line hasn't done a great job of protecting Wilson so far this year, as they rank 24th in sack rate (8.6%). That means that Wilson will have to escape the pocket on several occasions and make plays with his feet.

Wilson has the potential to go Over this rushing yardage in just one run. He did it last week against the Colts with an 18-yard scramble and we'll bank on him doing it again on Monday night. Let's ride the Over! Good luck with all your Monday Night action!