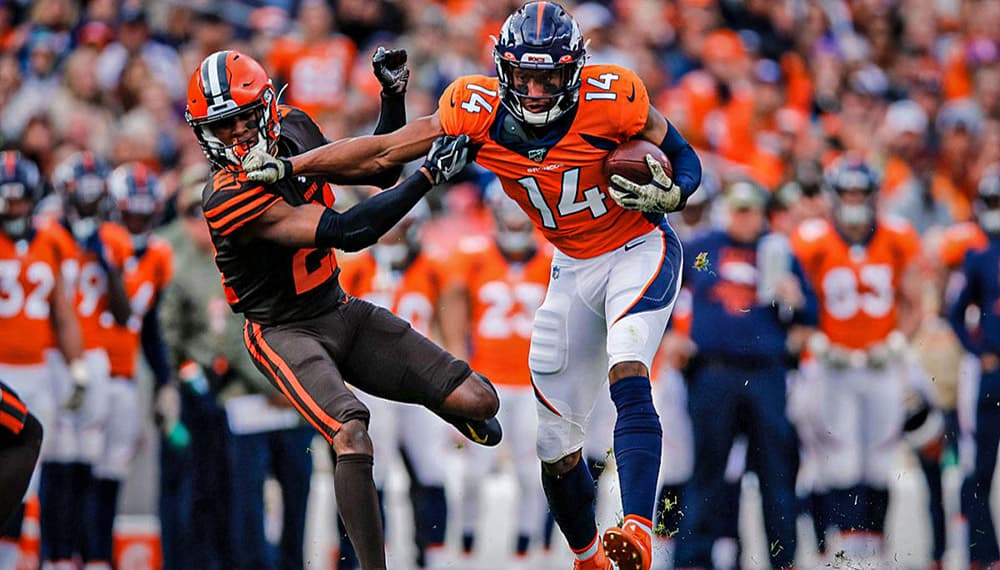 We have one of the better Thursday Night Football matchups of the season here in week 7 with the 3-3 Browns hosting the 3-3 Broncos. This is an AFC matchup between two .500 teams that still have postseason aspirations. The game will be played in FirstEnergy Stadium in Cleveland with the forecast calling for light rain.

Both of these rosters have been decimated by injury, Cleveland's current injury report is particularly bad, but the fact that the majority of Denver's injuries came to the front 7 on defense should play to the Browns' strengths.

PointsBet is offering all new players an instant $200 bonus with any $20 bet on Thursday Night Football. Here is how the offer works:

Live Odds and Best Available Numbers for Broncos at Browns

The preseason look-ahead line for this game was Cleveland –6, and that is where most books opened up last week. After a plethora of injuries on the Cleveland side during Week 6, sportsbooks reopened this spread at 4.5 points, with Denver money flooding in almost immediately, moving this line to somewhere between 3 to 3.5.

What to Expect from Cleveland on Thursday Night

We did mention a few weeks ago, that the Broncos lost almost 10 players from their starting lineup to injuries since Week 1, but sadly, Cleveland is an even tougher spot now. The Browns are without two starting tackles, multiple linebackers, and corners. The injury situation with their skill position players also looks rough going into Week 7.

Cleveland will surely be without WR #2 Jarvis Landry, while WR #1 Odell Beckham is questionable at best with a shoulder injury. If OBJ also misses Wednesday’s practice, we would expect him to miss TNF. The running back situation is also dire with both Nick Chubb and Kareem Hunt being out for Cleveland with calf injuries. So far in 2021, the Browns are one of the most efficient running teams in the league mostly thanks to these two players, who will now surely miss this game against Denver.

Sadly, neither of these injuries are as important as QB Baker Mayfield’s injury. The team revealed that Mayfield suffered a torn labrum in his left shoulder a few weeks ago, but the situation with the QB’s injury hasn’t been getting better. Mayfield was limited in Tuesday’s practice and according to the coaching staff, it is his decision if he wants to start or not on TNF behind this injury-riddled offensive line.

The Browns are coming off a 14-37 destruction by the hands of the unbeaten Arizona Cardinals. After a decent start, Mayfield was struggling in the second half of the game only throwing for 63 yards with one turnover-worthy play.

According to football analyst site PFF, Mayfield is worth about 3.5-points to the spread over backup Case Keenum. If Mayfield isn’t ready to give it a go on Thursday, we would expect this spread to move to under a field goal.

What to Expect from Denver on Thursday Night

The Denver Broncos are in a slightly better spot when it comes to their injury situation heading into Week 7. The road team will still be without #2 WR Jerry Jeudy, and Denver also has a cluster injury at linebacker, but offensively this team is at least almost fully healthy with QB Teddy Bridgewater, RBs Melvin Gordon and Javonte Williams, and the receiving core of Courtland Sutton – Tim Patrick – Noah Fant all available.

Denver’s Bridgewater wasn't playing well with 3 touchdowns and 3 interceptions in Week 6, but overall, through the season he still holds a 69% pass completion rate and a pretty decent 7.4-yard average depth of target. His accuracy hasn’t been top-notch lately, but he is still pushing down the ball downfield with remarkable consistency, and if he isn’t forced to play from behind leading to inaccurate deep passes, he should be fine here.

At this point, this game is Denver or bust for us. The line already moved significantly towards the Broncos and we are expecting a further move as it seems unlikely that Baker Mayfield will be ready for this one. Even if he plays, he shouldn’t be close to100% and with the lack of a real running game bailing him out, we are expecting the Broncos to win this one outright.

Grab the field goal if you can, but betting on Denver’s money line is also perfectly fine here. Besides taking Denver, we are also leaning towards the under on the full game total at 39.5 or higher.

Looking at the current player props available at TwinSpires sportsbook, there is a handful that jump out but two that are absolute locks. We are parlaying these two at +290 and feel like it as close to a lock as we have played all season.

With both Chubb and Hunt out, it becomes the D'Ernest Johnson show on the ground for the Browns. The Browns run game struggled without Chubb last week, but that was something we predicted coming off what was the game of the year against the Chargers (134 plays) and running into a stout Cardinals defense.

Denver's front 7 is in shambles right now, not only missing Bradley Chubb but both starting interior linebackers. They have also lost depth players and are really down to four bodies filling starting positions in that front seven. As a result, the run defense, which was arguably the best in the NFL over the first three weeks of the season, has already dropped back to the middle of the league. The Broncos gave up 4.8 YPC last season, so we know the scheme is not good enough to overcome these injuries.

This play is all about volume for Sutton. He received 25 targets over the last two weeks and has averaged 10 targets per game since week one. Granted, we will need to confirm Jeudy is out before truly considering this one a lock, but Fangio has already stated he has less than a 50% chance of playing Thursday night.

Sutton's volume is particularly attractive because he is facing a Browns secondary that has allowed 260 passing YPG over the past three weeks and really does not have a shut-down corner right now. Greedy Williams has been solid since his return from injury, but how good can you feel when the secondary as a whole allowed over 600 yards and 8 touchdowns the last two weeks?

If Sutton does receive double-digit targets again here this week, 67.5 yards is a lock. He has never failed to reach that number with 10+ targets. Some sportsbooks are even offering 4.5 receptions as a number, which is also shockingly low as he's averaged seven per game over the past five weeks.