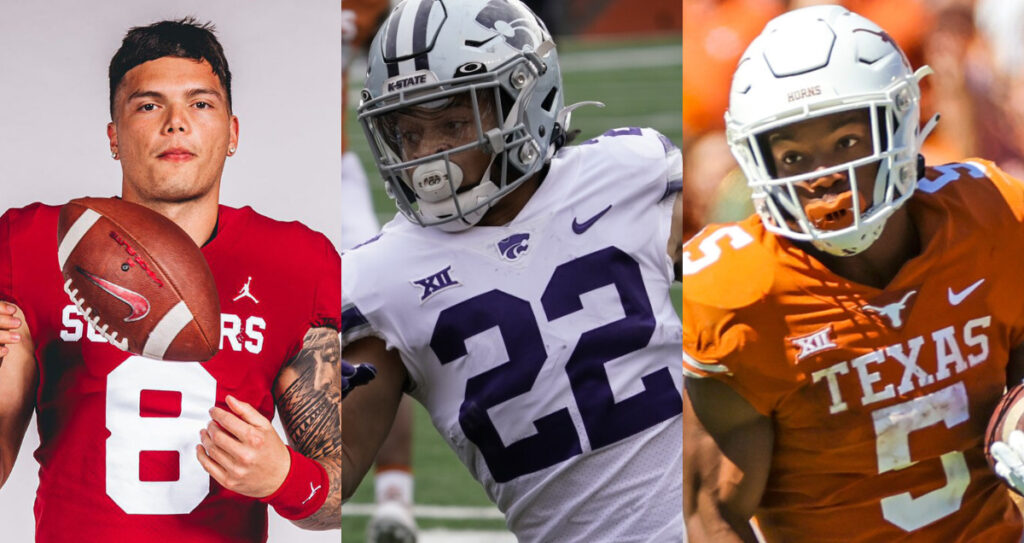 Dillon Gabriel, Deuce Vaughn, and Bijan Robinson are all featured in our Big 12 Betting Preview as three of the best players in the conference.
By Bill Christy on July 22, 2022

The Big 12 had to be shocked when their two heavy hitters, Texas and Oklahoma, announced that they would be leaving the conference to join the mighty SEC in 2025. You have to give the Big 12 credit because they sprung into action pretty quickly by adding BYU, Houston, UCF, and Cincinnati. However, none of these teams will officially enter the conference until at least 2023.

In the below column, we'll take a look at the current odds to win the Big 12 Championship Game as well as each team's season win totals. These numbers are from DraftKings Sportsbook and will be updated as the season gets closer. As expected, Oklahoma and Texas are the clear favorites but Oklahoma State and Baylor are close behind.

The Cowboys had a magical 2021 season that saw them shoot out of the gate winning their 1st 6 games of the season, which included wins over KSU and Baylor at home along with wins on the road at Boise St and Texas. Iowa State stole a win from the Cowboys that settled most excitement, but Mike Gundy’s group did not lick its wounds and instead won another 5 straight games.

In the rematch with Baylor that came in the Big 12 title game, the offense could never truly get going and the Cowboys fell 21-16. The 11-2 record was good enough to land a spot in the Fiesta Bowl against national power Notre Dame. After falling behind 14-0 and then again 28-7, the Cowboys rallied and dominated the 2nd half to win 37-35.

It is not a trendy pick, but we like OKST (+700 at Unibet) to repeat their success from last season and get over the hump to win the conference title this year. The defense, which was 10th in the country last year allowing just 18.2 points per game, will have one of the strongest defensive lines in the country returning. This will be key as they lost most of their secondary.

If the line is able to contain the run and consistently put pressure on opposing passers, the defense will still be at the top of the conference. Spencer Sanders is back behind center but will have a new face in the backfield and a new top target as both Jaylen Warren and Tay Martin are gone.

They return 3 of their offensive linemen. The backfield will be young but deep, the Big 12 has gone through a lot of changes, and the Cowboys will reap the rewards of a steady leader in coach Mike Gundy and on the field with Spencer Sanders and a stout defense.

Chris Klieman is just 20-16 in his early tenure as the man replacing the legend, Bill Snyder. 2021 was not the best in terms of conference play (4-5) but an 8-5 overall record was an improvement and could be a foreshadowing of what is to come for these Wildcats. The season culminated with a 42-20 beatdown of LSU in the Texas Bowl.

An offense that averaged 6.2 yards per play was good enough for 22nd in the country last year but it was the defense that was its strength. Ranking 19th in the country, KSU held opponents to just under 21 points per game.

We love this Wildcats team in 2022 and believe they will be right in the mix for the conference title. The defense returns 5 starters but also a plethora of other players with a ton of experience. If they are able to replicate something close to last year’s performance, this group will be complemented by a newly retooled offense.

Do-it-all back Deuce Vaughn returns to the backfield and will be met by the Nebraska transfer, Adrian Martinez, who will be taking snaps and causing Big 12 defenses to scheme for one of the most versatile offenses of 2022 in the conference.

It was a wild up and down season for the Sooners last year. Spencer Rattler was believed to take a big stride forward and contend for the Heisman while leading this Sooners team to a playoff berth. However, things did not go as planned and Rattler was replaced by Caleb Williams, who had spurts of great play and other stretches of not-so-great play.

Even with the instability, the Sooners still went 9-0 prior to taking a 24-17 loss at Baylor in Week 11. They bounced back by defeating Iowa State at home but then were tripped up by Oklahoma State on the road to finish their regular season. The offense looked good in their Alamo Bowl game where they defeated the Oregon Ducks 47-32.

Lincoln Riley bolted for USC in a move that shocked many and brought Caleb Williams with him to Southern Cal. However, the Sooners brought in a strong coach in Brent Venables, who had been leading the Clemson defense for years. Spencer Rattler left for South Carolina but Venables brought in Dillon Gabriel to take the snaps.

Gabriel enjoyed a ton of success at UCF and will have signal caller Jeff Lebby calling plays for him as he did earlier in his career. The defensive changes will remain to be seen, but Venables is one of the best defensive minds in the country and should get this group heading in the right direction quickly.

Baylor went 10-2 in regular season play with their 2 losses coming on the road to Oklahoma State and TCU. The OKST loss was avenged in the Big 12 conference title game where the Bears won the title in a 21-16 game. They met Ole Miss in the Sugar Bowl and their defense, which had been their strength all year, really showed up.

They held the Rebels to just 7 points, winning 21-7. That defense got to the opposing QBs at an 8.46% rate, which was good enough for 23rd in the country. Offensively, the rushing attack was where the Bears had most of their success. They averaged over 200 yards per game which were more than they averaged through the air.

New head coach Dave Aranda will have his hands full but has a good group of returning starters on the defensive side of the ball again even though they lost a couple in the secondary. Blake Shapen looks to be the starter under center as he beat out Gary Bohanon. He will have to find new targets as most of the receivers and their backfield are no longer in Waco.

Baylor could get over their win total but road games in West Virginia, Oklahoma, and Texas will provide roadblocks, and don’t sleep on the Cougars of BYU that they will face in the non-conference portion of their schedule.

In 2021, the Texas Longhorns ushered in the Steve Sarkisian era with an underwhelming 5-7 record and 3-6 mark in conference. After 4 years with Tom Herman at the helm, the Longhorns piled up a record of 32-18 along with an undefeated 4-0 bowl record. But that was not enough for the powers that be and Herman was fired at the end of the 2020 season.

The offense was not much of an issue for Texas as they posted 35.3 points per game average on the year. The offense was exceptional in the RedZone where they ranked 6th with a 93.02% scoring rate. Defensively, the Longhorns allowed almost as many points as they scored, 31.1 per game to be exact. They were especially poor against the run and allowed over 200 yards on the ground per game.

Sarkisian will have to make a decision on who will be running the show on offense between Hudson Card and Ohio St transfer Quinn Ewers. The offensive line will be a question mark with 2 freshman tackles, but whoever Sarkisian decides to go with will not have a lack of weapons.

Isaiah Neyor and Xavier Worthy return on the outside and Bijan Robinson will tote the rock in the backfield. The defense remains a mystery with only 5 returning starters and will need to be better than last season. An 8-win total just seems to be too much for Sark in his 2nd year and we believe there will be a better chance for Texas to finish with 7 wins rather than 9.

The Cyclones had glimmers of greatness at times in 2021 and also showed signs of ineptitude. They had big wins over Kansas State on the road and home against Oklahoma State. Their 6 losses on the season came by an average of just 6 points.

They were unable to close many tight games, which ultimately cost them time and time again. Iowa State was one of the most balanced teams in the Big 12 last season. Averaging 32.6ppg and allowing an average of 21.4 placed them 25th and 20th in the country respectively.

Brock Purdy and Breece Hall are both gone from the offense and Will McDonald will be one of only a few familiar faces on the defense. There is hope that coach Matt Campbell will make Hunter Dekkers and Jirehl Brock the new household names in Ames, as they are set to replace Purdy and Hall.

Even if they pan out, the defense lost a majority of its secondary and will be hard pressed to find ways to fill multiple talent gaps. All that said, we believe 7 wins will certainly be possible as they get KSU, Oklahoma, and Baylor all at home in 2022.

In what ultimately became a swan song for Gary Patterson, the Horned Frogs struggled all season. Although an upset win over Baylor at home later in the year looked to give them a boost, TCU got smoked 63-17 at OKST and then barely squeaked by an awful Kansas team at home 31-28. The offense averaged 6.4 yards per play, which ranked them 12th in the country, but the 7.3 yards per play on defense was too difficult to overcome from week to week.

2022 will be the 1st time since 2000 that coach Patterson will not be roaming the sidelines. One thing is for sure, new head coach Sonny Dykes is going to have the offense doing big things one way or the other. He has a nice talent pool of skill players in Kendre Miller and Quentin Johnston.

The defense returns 7 starters including Tre’Vius Hodges-Tomlinson in the secondary. This squad won’t have folks forgetting about Patterson too quickly, but they have the talent to surpass 6 wins this season.

The last 3 teams of the Big 12 combined for a total of 8 wins in conference and 23 losses overall. There was not much to love about any of the three on either side of the ball. Much will remain to be seen for these 3 programs come the Fall but we have no confidence in any of them.

We are playing the over in Kansas wins just for the fact that it seems near impossible for them to regress back to the 0-9 record from 2020 under Uncle Les (Miles). Lance Leipold has his eyes set on 3 or more wins in 2022 and we are there for it.