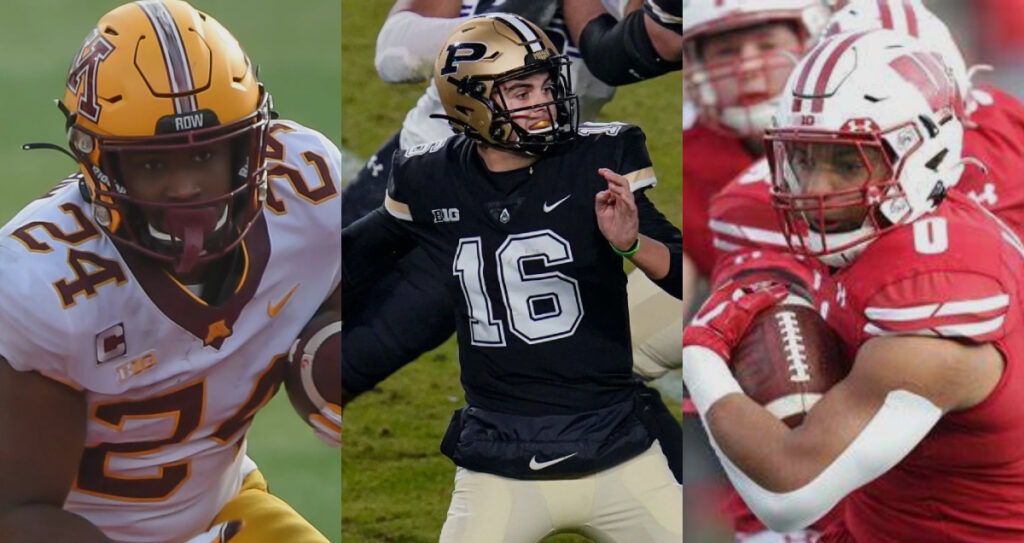 Mohamed Ibrahim, Aidan O'Connell, and Braelon Allen should be three of the top players in the Big 10 West in 2022.
By Bill Christy on June 30, 2022

Wow, it felt amazing to get some college football talk going yesterday by taking a look at the Big 10 East. Today, we put a bow on the Big 10 by going over the Big 10 West.

While the East will likely come down to Ohio State and Michigan, The West is likely to be pretty wide open in 2022. Let's get to our best bets on each team's total wins and take a look at each team's odds to win the Big 10 title and national title.

* Odds updated weekly ahead of the 2022 CFB Season

Minnesota fans thought their season was over almost before it even began. They faced off with Ohio State in the opener and if that wasn’t a tough enough start, they lost their star running back Mohamed Ibrahim to a torn Achilles. Although, despite the darkness that loomed after the 1st game, PJ Fleck was able to round the troops and get the Gophers to finish the season 9-4 which concluded with a victory over West Virginia in the Guaranteed Rate Bowl.

Ibrahim is back and likely with a chip on his shoulder to prove doubters wrong and get back in the good graces of NFL scouts. Kirk Ciarrocca also returns and will look to increase his touchdown total of 30 from last season. The secondary will be the strength of this Gophers’ squad.

The West is a very top-heavy division and little will be separating this Minnesota team and the next 3 from each other. They will battle Michigan State in the 4th week on the road in their toughest test of the season. They’ll be home against Iowa and then finish on the road in Wisconsin which could very well decide the division.

Purdue’s 2021 season can be summarized by the saying “1 step forward and 2 steps back”. They were unable to string together 3 straight wins until the final 3 games of the season, with the help of an additional game in the Music City Bowl.

They were able to finish with a 9-4 mark and Aidan O’Connell could be a dark horse Heisman candidate this coming season. O’Connell led Purdue to the 2nd best competition percentage in the country and the 355.4 passing yards per game was good enough to finish 5th in the country.

2022 could be a big year for the Boilermakers. O’Connell will have some new faces to throw to by way of transfer. Broc Thompson and Charlie Jones are set to be his main targets as David Bell headed to the NFL and Milton Wright is ineligible.

The defense has a new coordinator and will need to be as good or better than last year’s defense. As for the running attack, King Doerue hopes to keep his yards per carry high (7.8 in 2021) as his number of carries increases this year (135 att in 2021).

The schedule is what lines up best for the Boilermakers. They avoid Ohio St, Michigan, and Michigan State while getting Penn State at home to begin the season. Wisconsin and Minnesota on the road are likely to be their 2 toughest tests.

The Badgers really stumbled out of the gate last season. Losses to Penn St, Notre Dame, and Michigan put them at 1-3 after just 4 games. Needless to say, things looked bleak.

However, head coach Paul Chryst would not let his team fold after the slow start and willed them into a 7-game win streak that included wins over Iowa and Nebraska at home and a road win over Purdue. They capped off the 9-4 year with a win over Arizona State in the Las Vegas Bowl.

Things will not be easy for the Badgers in 2022. They get Ohio St and Michigan St in the crossover portion of their schedule and will be on the road this year against Iowa. They will be retooling on defense but have mainstay, Jim Leonhard, running the show as D coordinator again.

The offense will have some serious question marks as well. Tight end Jake Ferguson left for the NFL while Kendric Pryor and Danny Davis leave voids at receiver. This gives us little confidence in QB Graham Mertz, who threw 11 INTs to his 10 TDs last season. Braelon Allen will join the long list of great running backs to play for Wisconsin, but he alone will not be enough for the Badgers to crack 9 wins this year.

Winning when it really mattered last season was not Iowa’s strength. Losses to Purdue at home and then on the road in Wisconsin showed the kinks in the armor of a team that looked like a top 5 power at one point in the season.

They faced off with Michigan in the Big 10 title game and were decimated 42-3. They were then invited to the Citrus Bowl to face a decent Kentucky squad but the hangover of the Michigan loss turned into a loss to close the season.

2022’s schedule is going to be one of the toughest in the conference. They get Michigan, Iowa, Wisconsin, and Nebraska, all be it at home. Ohio St, Purdue, and Minnesota will all provide extremely tough road tests for the Hawkeyes.

The Williams’ will offer a strong running attack in Leshon and Gavin but the QB spot is still a battle between Padilla and Petras. They have a good receiving corps but without a consistent arm slinging it to them, this Hawkeye team will struggle.

On defense, the Hawkeyes will be hard-pressed to force 31 turnovers like they did last season which hide some of the holes they had on that side of the ball. Kirk Ferentz is one of the best, but there may be too many hurdles to overcome in 2022.

8 of Nebraska’s 9 losses in 2021 came by less than one possession. We are not making excuses for Scott Frost and his Cornhuskers, but the 3-9 mark may be a bit deceiving from last year.

The opening loss to Illinois certainly stung but Oklahoma and Michigan St on the road are not the worst losses. They ended their season with a murders row of opponents and while they lost all 6, only Ohio St was by more than 8 points.

Scott Frost has his rear firmly on the hot seat this season. He has failed to get a winning season and bowl bid in his tenure at Nebraska. However, he made a big play in the offseason by bringing in Texas transfer, Casey Thompson to take over for Adrian Martinez.

Thompson will have a decent number of targets and a backfield by committee that will be utilized. The biggest fear for Husker fans is going to be their secondary. They lost 3 of their 4 starters from last year, a group that was pivotal in keeping opponents to under 225 yards passing and just 24.1 points per game. Frost will need to address those holes if he is to be employed in 2023 by the University.

Bret Bielema did not waste any time trying to turn around this Illinois program in his 1st year. Nebraska, Minnesota, and Penn St all fell victim to the underrated Illini squad last season. They did most of the dirty work on the defensive end. The Illini ranked 25th in the country, holding opponents to just 21.9 points per game.

The issue, however, was their inability to score points on the offense side of the ball. 20.2 points per game is just not going to get you many wins in the Big 10. A 5-7 mark in 2021 has many in Champaign excited for what the future holds in 2022.

Tommy DeVito, a Syracuse transfer, is like to take over the play-calling duties but he will likely lean on the strength of this offense which should be the dual threats in the backfield of Chase Brown and Josh McCray. The defense will return 6 starters and the linebacking corps will get boosted by Calvin Hart’s return from injury. It may come down to the last game of the season against Northwestern, but Bielema will repeat his 5-win mark from last season.

No, let’s go with the 231 yards per game this team allowed in 2021. Head coach Pat Fitzgerald was seemingly left with his pants down, so to be speak, following the retirement of defensive coordinator Mike Hankwitz in the 2021 offseason.

Will 2022 be any better for the Wildcat defense or offense for that matter? To be honest, there is not much signaling there will be any real positive change on either side. Running backs Evan Hull and Cam Porter are maybe the only solidified roster spots on this Northwestern offense.

As for defense, your guess is as good as mine. We expect there to be some improvement on the rush defense as it is near impossible to be as bad as they were last year. However, an untested secondary could prove to be a problem that was hidden by the heavy run attack they saw on a weekly basis. All in all, we just don’t see this Wildcat team having the talent to compete this season.