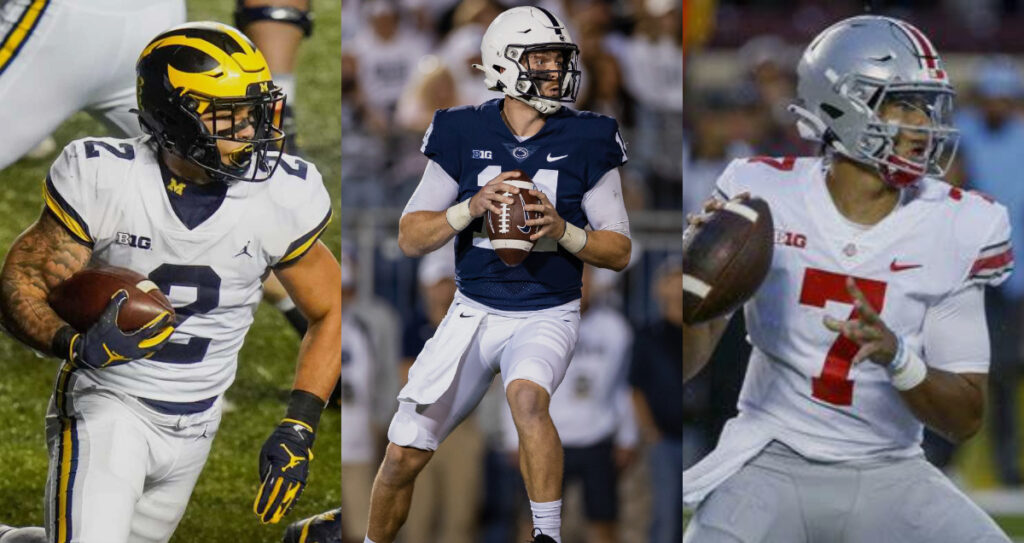 Blake Corum, Sean Clifford, and CJ Stroud headline what should be a tough Big 10 East division.
By Bill Christy on June 29, 2022

Though the dog days of summer are definitely here, college football will be here soon! It's never too early to start doing some research on some conferences, especially with the craziness of the transfer portal.

In the following preview, we'll break down each team in the Big 10 East. We'll also give out a best bet for each team's win total and go over each team's odds to win the Big 10 and the CFP National Championship. Let's get to it!

* Odds updated weekly ahead of the 2022 CFB Season

The Buckeyes suffered an early setback in 2021 when they lost to Oregon at home in the 2nd game of their season. However, they fought back and rattled off 9 straight wins to get to 10-1 as they headed into the Big House to face Michigan, who they had defeated more times than many can remember in recent history.

Unfortunately for Buckeye fans, they fell 42-27, and their hopes of making the BCS Playoffs disappeared. Their fate was set to represent the Big 10 in the Rose Bowl where they defeated Utah in comeback fashion after trailing by 14 points on 3 different occasions.

Enough about 2021, let’s take a look at why we like the Buckeyes to finish OVER their win total of 10.5 this year. The #1 reason is the fact that CJ Stroud will be back behind center leading a very high-powered offense. The Buckeyes were #1 in the country in points per game and yards per game last year.

TreVeyon Henderson will be in the backfield providing Stroud with the ability to mix a strong run game with his formidable passing attack. The defense, on the other hand, could be a cause for concern again. Being 90th in the country in opponents' red zone scoring and allowing 22.8ppg was not something Ryan Day was pleased with in 2021.

Day decided to bring in Jim Knowles from Oklahoma State to run the defense. He will lean on Tommy Eichenberg and Steele Chambers, who are some of the top linebackers in the Big 10. Ronnie Hickman and Denzel Burke will provide some coverage over the top as well.

2021 was a season the Wolverine faithful will not soon forget. Not only were they able to get over the hump of defeating their rivals Ohio State, but they also clinched the 1st BCS Playoff birth since its inception.

Hassan Haskins broke out and provided a run game that old-school Michigan fans were happy to finally see. Cade McNamara was a steady presence behind center, something that Michigan had been lacking during the Jim Harbaugh era.

Unfortunately, the playoff birth excitement was short-lived. The Wolverines were manhandled by the eventual National Champions, the Georgia Bulldogs 34-11. But there is hope that 2022 will be just as positive as 2021 for Harbaugh and his Wolverines.

The defense lost a lot to the NFL in terms of players, but also their coordinator. Mike MacDonald, who led one of the best defenses in the country last year, left to work for Jim’s brother John and the Baltimore Ravens. That being said, it will be the offense that will lead the way this season for the Wolverines, who will have Blake Corum toting the rock and McNamara back slinging it to a solid receiving core.

After a 4-point win over in-state rival Michigan, which gave them an 8-0 start to the season, Sparty and their fans were riding high and had BCS Playoff dreams dancing in their heads. But after losses to Purdue and Ohio State in 2 of their next 3 games, those hopes were dashed. They had to settle for a matchup with Pittsburgh in the Peach Bowl, where they handled the Panthers, 31-21.

The Spartans did lose Kenneth Walker III, who was one of the best RBs in the country, but they were able to pick up Jalen Berger from Wisconsin and Jarek Broussard from Colorado. They will run behind another solid offensive line. Speaking of transfers, they were also able to nab Ameer Speed from Georgia, who they hope will help solidify their secondary and continue the positive strides they made in 2021.

The Nittany Lions had a nightmare of a second half of the season last year. They started out 5-0 and seemed to be clicking.

However, a road loss to Iowa stung and the loss of QB Sean Clifford to injury began what was to become a 2-6 final 8 games of the season. The season ended with a 24-10 loss in the Outback Bowl to Arkansas.

Clifford is back for his senior season and “Linebacker U” added former University of Miami Head Coach Manny Diaz to the fold to be their new defensive coordinator. He inherits a defense that held opponents to just 17.3ppg, good enough for 6th in the country.

However, he did lose Brook and Smith at the linebacker position along with 3 defensive linemen. The secondary will be stout again led by Joey Porter Jr.

Clifford will truly be the engine that makes this team go and if he is to suffer another injury and miss time, it is doubtful PSU will be able to replace him. The Nittany Lions will need to improve at offensive line to keep Clifford upright, as they allowed 44 sacks last season which was the worst in the conference. We don’t trust that they will improve enough and ultimately, PSU will finish at 8 wins maximum.

The Terps’ 2021 season was a tale of 3 parts. They began with a win over West Virginia and had a nice 4-0 start to the season. They then lost 6 of their next 7 but won their last 2, including a slaughtering of Virginia Tech 54-10 in the Pinstripe Bowl. Taulia Tagovailoa put up big numbers but the defense was atrocious, allowing over 33 points per game.

Tagovailoa returns along with his receiving corps, which could be the best in the conference. However, it was never the offense that was a concern last year and shouldn’t be again this season. They return 7 starters on the defensive side, but being that they were not impressive last season, leaves little hope that they will be improved this season. We see this Terps squad going under their total this year.

Head coach Greg Schiano has not had the success at Rutgers that he had enjoyed in his previous stint. That being said, he has seemed to get the Scarlet Knights heading in the proper direction. It took the program 6 seasons to win 7 games in the conference. Since the return of Schiano, the team has won 5 in his 2 years.

After a 3-0 start, Rutgers competed with Michigan in Ann Arbor, losing just 20-13. They finished 5-7 before getting smacked in the Gator Bowl 38-10 by Wake Forest. Schiano has increased their win totals from one year to the next, and we expect him to do the same this coming season.

At worst, Rutgers should be able to maintain their 5 wins total from last year. Noah Verdal will have to beat out Gavin Wimsatt to hold onto his place running the offense.

The secondary will be the strength of the defense but they will need to improve on their front line that allowed over 160 yards on the ground per game last season. At a 4-win total, we feel comfortable playing the over. If we could only get 4.5, we would be much more cautious.

A 2-10 season is not what Indiana nor head coach Tom Allen had envisioned for 2021. 8 straight losses to end the season leads to little confidence that this Hoosiers program is heading in the proper direction. The 35 points per game that they allowed was only overshadowed by the ineptitude of an offense that was only able to muster 13.7 points per game themselves.

The entire offense will be revamped via transfers. Connor Bazelak will run the offense after leaving Missouri. Josh Henderson is likely to carry the bulk on the ground and Emery Simmons will give Bazelak a threat through the air. Walt Bell will be the man to call the plays this season and will need to get them in a spot where they can average enough to be competitive.

Micah McFadden’s 91 tackles for loss last year was 9th in the country. He is no longer on the field for the Hoosiers and will be sorely missed. An unstable offense along with a poor defense that lost its top player leads us to believe they will finish under their total of 4 wins.