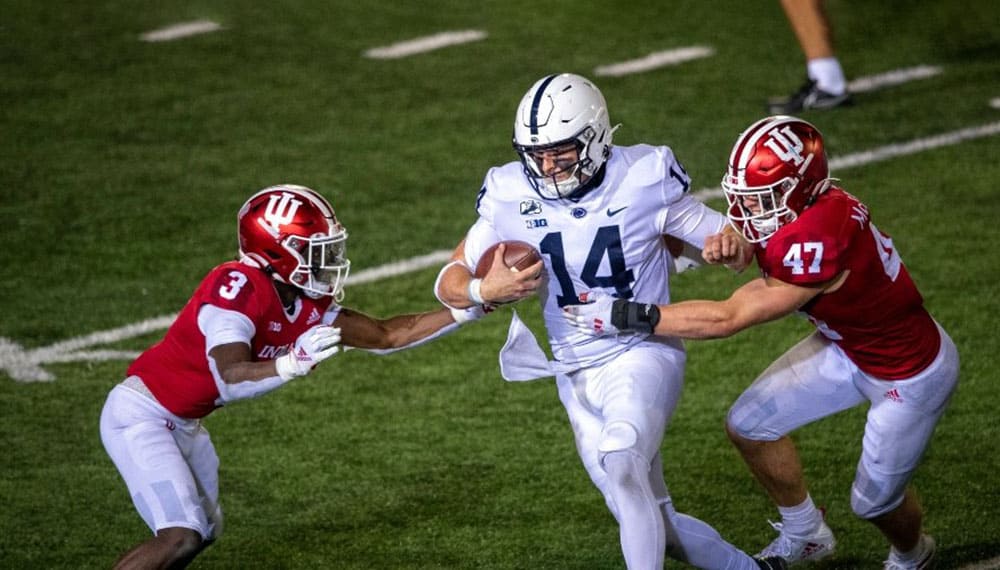 The Indiana Hoosiers head to Happy Valley to take on the Penn State Nittany Lions for a Big 10 battle. Indiana has had a disappointing start to the season, as they come into this game with a 2-2 record. Penn State is a perfect 4-0 and James Franklin has his group thinking of a potential conference championship.

The kickoff for this showdown is at 7:30 Eastern Time and it can be seen on ABC. Indiana had to fight tooth and nail to get past Western Kentucky last week while Penn State cruised in their game against Villanova. The Nittany Lions will definitely have revenge on their minds, as the Hoosiers beat them by one point in overtime last year.

New players that sign up using the promo code BVFBMULTI1 will receive a $200 bonus on their first $20 College Football wager. Just follow these four simple steps:

The bookmakers are thinking that Penn State will get their revenge on Indiana quite handily as the Nittany Lions are favored by 12.5 to 13 points. The total is currently sitting at 53.5 points.

Before betting on this Big 10 battle, check out our free odds page. This will help you quickly find out the best sportsbook to place your bet.

It may not sound like that big of a deal, but getting an extra half of a point here and there will pay huge dividends at the end of the year. Here is a live look at the best odds for Indiana at Penn State:

What to Expect from the Indiana Offense in Week 5

There’s something wrong with Hoosiers QB Michael Penix Jr. After multiple knee injuries, the junior signal-caller just doesn’t look comfortable in the pocket. Penix has thrown for 821 yards and four touchdowns but his six interceptions have been a major hindrance to this offense. He’s got to do a better job in the red zone, as the Hoosiers are only scoring 78.57% of the time down there.

The Hoosiers running game has been decent at times. RB Stephen Carr has run for 336 yards and three scores so far but he’s only averaging 2.6 yards per carry against Top 25 teams. The Hoosiers have to find more ways to get Ty Fryfogle the football in space. He’s the best playmaker on the offense but has only found the end zone once so far this season.

What to Expect from the Penn State Defense in Week 5

The Penn State defense has played lights out through their first four games. This unit is only giving up 15 points per game and they looked dominant against both Wisconsin and Auburn earlier this year. Linebacker Brandon Smith leads the team in tackles with 27 and he’ll be trying to stuff Carr and the Hoosiers’ running game.

The Nittany Lions’ secondary has also played solid. They’re only allowing 204.5 passing yards per contest and have already picked off five passes. Safety Ji’ayir Brown leads the team in both interceptions and passes defended.

What to Expect from the Penn State Offense in Week 5

James Franklin has this Penn State offense humming right along. After a lackluster performance against Wisconsin, QB Sean Clifford has played like a man possessed. The 6-2 senior has thrown for 1,158 TDs and eight touchdowns while only throwing two picks.

Clifford should be able to find success against a Hoosiers defense that’s allowing 229 passing yards per game. Jahan Dotson has been Clifford’s favorite target to throw to down the field. The 5-11 senior has caught 27 balls for 362 yards and four TDs this year.

Penn State runs a balanced offense so look for RB Noah Cain to get his fair share of carries against Indiana. Cain has rushed for 164 yards and three TDs so far. The Nittany Lions red zone offense has been outstanding, as they’ve scored nearly 91% of the time once they cross the 20-yard line.

What to Expect from the Indiana Defense in Week 5

The Achilles heel of the Hoosiers so far this year has been their defense. This unit is giving up 29.3 points per game which ranks 94th in the country. The Hoosiers do pretty well against the run, as they’re only allowing 108.5 yards per game on the ground.

Linebacker Micah McFadden is the emotional leader of this defense. The 6-2 232 pounder leads the team in tackles for loss and sacks. McFadden will be instrumental in shutting down Cain and the Penn State rushing attack.

The biggest concern for this defense is the secondary. Dotson could burn this unit deep several times in this game so they better have two guys on him.

We’re not as big on the revenge angle in college football as some folks. However, we think this is an outstanding spot for Penn State to get some sweet revenge. The OT loss to Indiana last year derailed their season and you can bet Coach Franklin is reminding his team of that.

Indiana has some playmakers on offense so they may be able to hang tough for a quarter or two. However, we think the Penn State red zone defense will be too stingy and will force Indiana into a lot of field goal attempts.

We also see Penn State’s passing offense burning the Indiana secondary for several big plays. Jahan Dotson and Parker Washington both have a ton of speed and will be too much for the Hoosiers to handle. Clifford also seems to have solved the turnover problems that plagued him earlier in his career.

We see this one being a blowout, with Penn State winning 38-17. Lay the points and good luck!