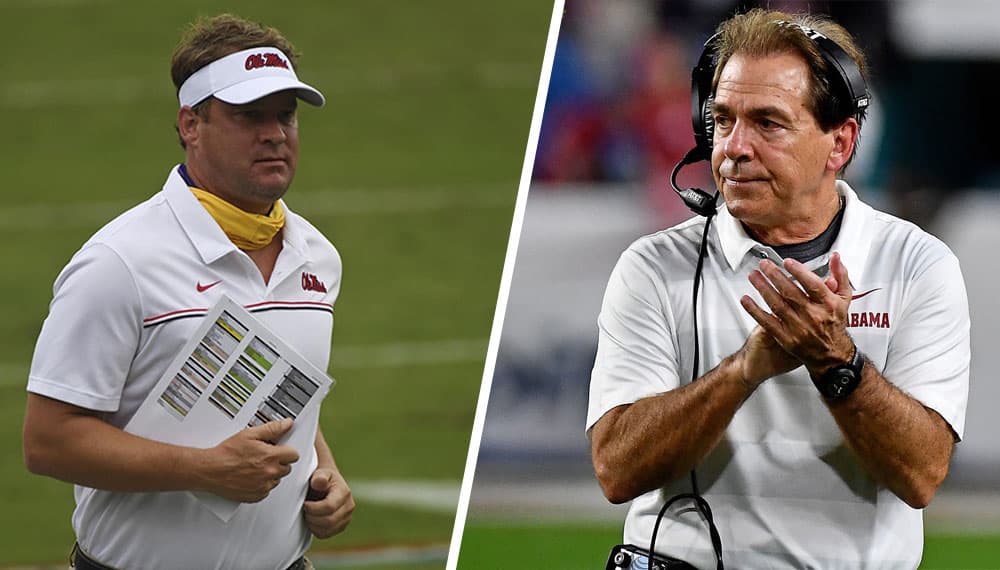 Hardcore college football fans have to be excited about the big storylines of this matchup between Ole Miss and Alabama. Not only do we have Lane Kiffin trying to take out his former boss Nick Saban, but we also have the top two Heisman contenders duking it out in this one.

The kickoff is set for 3:30 PM Eastern Time and the game will be on CBS. Both teams have perfect records on the season. Alabama is coming off a blowout win over Southern Miss while Ole Miss is coming off a bye week.

Will the extra week to prepare for Bama help Kiffin and the Rebels pull off the upset? From stealing signals to Heisman hopefuls to a ridiculous 80-point total, this game has it all. Find our breakdown and pick for best bet below.

New players that sign up using the promo code BVFBMULTI1 will receive a $200 bonus on their first $20 College Football wager. Just follow these four simple steps:

Though last year’s contest was tight at times, the Crimson Tide still won by 15. Oddsmakers are expecting a similar result in this game as the Crimson Tide is currently favored by 14 to 14.5, depending on which sportsbook you do business with. There should be lots of touchdowns in this one, as the point total is in the 79 to 80 range.

Before betting on this SEC Showdown, head over to our free odds page. This will help you quickly find the sportsbook that is offering the most favorable odds. Here is a live look at the best odds for Ole Miss at Alabama:

What to Expect from the Ole Miss Offense in Week 5

Though his cockiness rubs some fans the wrong way, Lane Kiffin is brilliant when it comes to drawing up plays. He’ll definitely have some fun trick plays on his play-calling sheet and he knows Alabama’s defensive scheme all too well. Kiffin has done a fantastic job of developing QB Matt Corral.

Corral is listed as one of the early favorites to win the Heisman because of his arm strength, precise accuracy, and running ability. The 6-foot 200-pound junior has tossed nine touchdowns and ran for five scores on the ground as well. Kiffin knows that the Bama defense often struggles with mobile quarterbacks so expect him to call plenty of options and QB draws. You can bet that Kiffin has watched the film of the Alabama / Florida game multiple times during the bye week.

What to Expect from the Alabama Defense in Week 5

The Alabama defense has only allowed 17.5 points per contest but hasn’t quite lived up to the preseason expectations of being one of the best units in the country. Giving up 29 points to Florida and their efficient rushing attack a couple of weeks ago is a glaring concern for Tide fans. Defensive coordinator Pete Golding has got to find more ways to create havoc, as this unit has only sacked the QB six times this season so far.

The Rebels offensive line will have a tough time containing defensive end Will Anderson, who is stunningly quick off the line and seems to always be in the backfield. If Bama can’t get pressure on Corral with their front four, look for Golding to possibly send Henry To’o To’o and Christian Harris on some disguised blitzes. The Tide secondary has got to be more disciplined, as they seem to always commit too many penalties.

What to Expect from the Alabama Offense in Week 5

QB Bryce Young looks to be mature beyond his years and he could cause plenty of heartburn for this Rebels defense. Young, like Corral, is also an early favorite for the Heisman because of his phenomenal ability to perform well outside the pocket. The 6-foot 194 pound sophomore has thrown 15 touchdowns and just one interception so far this season.

We expect Young to keep spreading the ball around to his plethora of weapons: Jameson Williams, John Metchie, Jahleel Billingsley, and Cameron Latu. Starting running back Brian Robinson didn’t play last week due to a rib injury but should see the field in this one. Even if Robinson isn’t 100%, Jase McClellan has plenty of skills to give the Tide a viable rushing threat.

What to Expect from the Ole Miss Defense in Week 5

The Rebels’ defense has come a long way since last season but they’re still a major question mark against this prolific Tide offense. Sure, this defense is only giving up 20.7 points per game but that stat is a bit inflated due to cupcake competition. The Rebels’ best pass rusher is Sam Williams, a great defensive end who already has four sacks.

The Ole Miss secondary will have its work cut out for them against Young and his group of speedy receivers. This unit has only picked off one pass so far and will have to play much better than it did a year ago if the Rebels expect to pull off the shocking road upset.

My oh my how times have changed! We never thought we’d see a total for an SEC game in the 80s but here we are! This game has shootout written all over it so we’re taking the Over!

These two teams combined for 111 points in last year’s contest. We don’t expect quite that many points in this year’s matchup but both offenses have the firepower to score in the mid-40s. We see Bama’s defense getting a couple of key stops and winning this game 49-35. Take the Over!