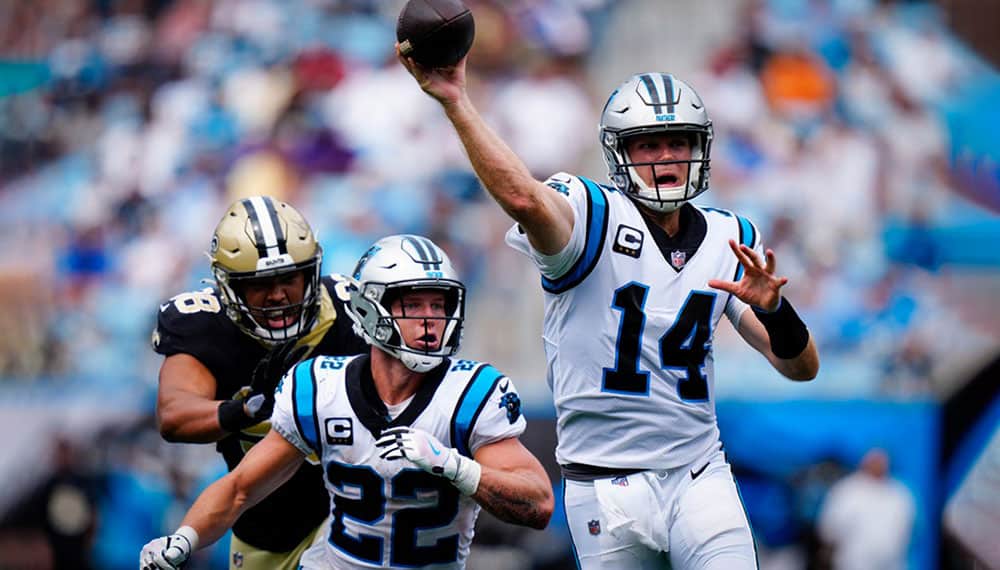 It was an interesting Week 2 filled with multiple upsets both straight up and against the spread. In this article, we’ll look at the opening lines for Week 3 as well as break down Thursday Night Football from a betting perspective.

So it appears the Texans are not the worst team in football! Tyrod Taylor proved his doubters wrong again. Taylor is a starting-caliber quarterback. He makes the right plays and he takes care of the ball. Unfortunately for the Texans, Taylor will be out for the next 3-4 weeks with a hamstring injury.

Without Taylor in the lineup, it’s hard to trust rookie QB Davis Mills to run a functioning offense with the sheer lack of talent on the team. The win over the Jaguars did not surprise me and it was Taylor who kept the Texans in the game against the Browns before his injury.

We shouldn’t overreact to the 2-0 start for Carolina. They have played two comfortable games, one against the paltry New York Jets, and another against the Saints in an admittedly bad spot.

Nothing about those victories really stood out to me other than what we already knew. Sam Darnold has legitimate starter potential and was held back by the Jets. Christian McCaffery, when healthy, is the best running back in football. Robby Anderson and DJ Moore could prove to be a difficult cover for opposing defenses.

That being said, this defense has not really been tested yet in 2021. I can’t imagine it will be Davis Mills’ Texans who will do it, but the Panthers' defense is not as good as their first two games would suggest.

The line in this one is somewhere between 7.5 and 8. I think this is too high, even though Taylor is out. However, I can’t stomach a bet on the Texans even at +8. I’m opening a teaser leg here on the Panthers: 1u 6pt teaser PANTHERS -1.5.

Looking across the slate, there are PLENTY of viable teaser options to close out this two-teamer.

Our Pick for 2nd Leg of This Week 3 Teaser

I think the best look here will be the Arizona Cardinals. In case you haven’t noticed, the Jaguars are bad. And I mean really bad. Urban Meyer has been abysmal as a Head Coach. The Jaguars' defense has been torched by both Teddy Bridgewater and Tyrod Taylor, in other words, guys who are not blowing you away.

I wouldn’t go as far as to suggest that Trevor Lawrence wasn’t worthy of the number one overall pick, but I also wouldn’t be too surprised to find out he is not exactly the transcendent talent we were told he was at Clemson. I like Arizona to cover the seven on the road, coming off a disappointing game against the Minnesota Vikings that they were lucky to win. Arizona’s defense showed its holes as they let Kirk Cousins and Dalvin Cook carve them up for 33 points.

I think the Jaguars' offense certainly has potential based on the players on the field, but coaching and poor scheme is very clearly holding them back. Trevor Lawrence is not lighting the world on fire and I think the Jaguars will be a popular fade.

I’m not ready to buy in on this Cardinals team for the long haul, however, as I still think this defense will hold them back and I’m not sold on Kliff Kingsbury as an elite head coach yet. That being said, expect Kyler Murray to bring the heat In this game and queue up both DeAndre Hopkins and Rondale Moore in your fantasy lineups. This could get ugly in Jacksonville.