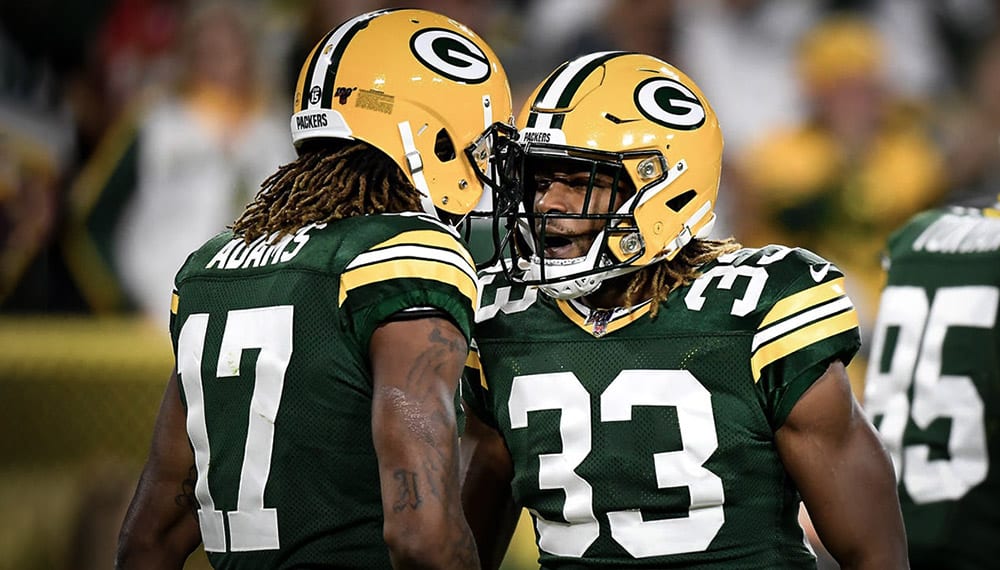 Welcome to NFL Week 9. It’s so hard to believe that we are halfway through the season! Our NFL props stumbled last week with a 1-3 record after going 3-1 in Week 7.

We look to bounce back this week in a big way with five NFL Week 9 player props that we feel great about. Best of luck this week with all of your Week 9 NFL wagers!

(Note: All lines are from TwinSpires Sportsbook)

We love Joe Burrow and think he’ll become one of the best QBs in the NFL in a very short time. However, this is a tough matchup for Cincy this week against a very stout Cleveland defense.

A quick look at Burrow’s numbers shows that he is averaging 276.9 passing yards per game this season. Keep in mind though that three of Burrow’s biggest yardage games this year were against the Jaguars, Lions, and Ravens (three of the worst pass defenses in the NFL). The Browns defense is light years better than all of those squads.

Cleveland ranks 7th in the league in passing yards allowed per game (220.1). This unit also sacks the QB 7.69% of the time, which ranks 3rd. Burrow could be running for his life at times during this game, especially since Myles Garrett already has 10.5 sacks this season.

We expect Burrow’s passing yards for this game to fall around 230 yards so we see plenty of value in the Under. Against tougher pass defenses (Bears and Steelers), Burrow only threw for 207 yards and 172 yards respectively.

The injury to Jameis Winston was terrible news for Saints fans but it makes us love this prop bet on Alvin Kamara. With Winston out, expect Sean Payton to lean even harder on Kamara now that journeyman Trevor Siemian is at the helm.

The former University of Tennessee star should get at least 25 carries in this game against a Falcons team that gives up 4.4 yards per carry (20th in the league). Kamara’s rushing yards have been down the last three games but we see that changing in this game.

The Falcons flat out stink against the run as they have allowed 125.1 yards rushing per game this season. Kamara should easily eclipse this rushing yard total. This guy is way too talented to be limited to less than 80 yards against such a terrible rush defense.

While the signing of Mark Ingram may limit Kamara’s carries a little bit, we still think he’ll get the job done for us in this spot. Take the over and watch Kamara slice through this Falcons defense all day on Sunday!

Waddle looks to finally be getting 100% healthy after suffering a gruesome leg injury while at Alabama last year. The 5-10 182 pound speedster is starting to become a bigger part of the Dolphins offense. Waddle has been targeted 32 times over the last three weeks so he has a great chance of having a big game against a below-average Houston Texans secondary.

Dolphins QB Tua Tagovailoa and Waddle have a ton of chemistry that goes back to their days together at Alabama. When pressured, Tua usually looks Waddle’s way. Waddle has already gone over this yardage total four times this season.

Did we mention that the Texans’ defense is awful? This unit allows 8.1 yards per pass, which is ranked 30th in the league. Miami is hungry for a big win after losing seven straight games. We expect a big day for this Dolphins offense and Waddle. Play this one OVER!

With QB Aaron Rodgers out for this game with COVID, this is the perfect opportunity for head coach Matt LaFleur to lean on his running game. There’s no way that LaFleur is going to dial up a ton of pass plays for an inexperienced QB like Jordan Love, especially since he has two big horses like Jones and A.J. Dillon at his disposal.

Jones has carried the rock 15 times or more in four games already this season. Keep in mind though that those stats were with Rodgers at QB. The Packers run the ball 42.13% of the time but expect that number to increase for this game.

The Kansas City Chiefs defense has been a major disappointment all season long. The entire defensive unit looks out of sorts and out of position multiple times per drive. The Chiefs rank 28th in yards per rush allowed (4.6) and 22nd in rushing yards allowed per game (121.8).

Jones should have a huge game against this defense on Sunday afternoon. We see Jones getting at least 20 carries so that Love isn’t asked to do too much in his first NFL start. This is the ideal situation to take Jones Over 14.5 carries.

Isn’t it crazy that Mahomes has thrown 10 picks already this season? He’s still averaging 296 passing yards per game though. However, in the Chiefs’ last two games, Mahomes has only thrown for 206 yards against Tennessee and 275 against the New York Giants. This points to an under for this game in our opinion.

The Green Bay secondary may be one of the most underrated groups in the NFL. This unit only allows 6.4 yards per pass (6th) and 216.8 passing yards per game (also 6th). Sure, the Chiefs have plenty of weapons but we see the Packers limiting their overall offensive output on Sunday.

Green Bay’s defensive weakness is more against the run so expect Andy Reid to try to run the ball more often and throw some short screen passes. We love the Under here!