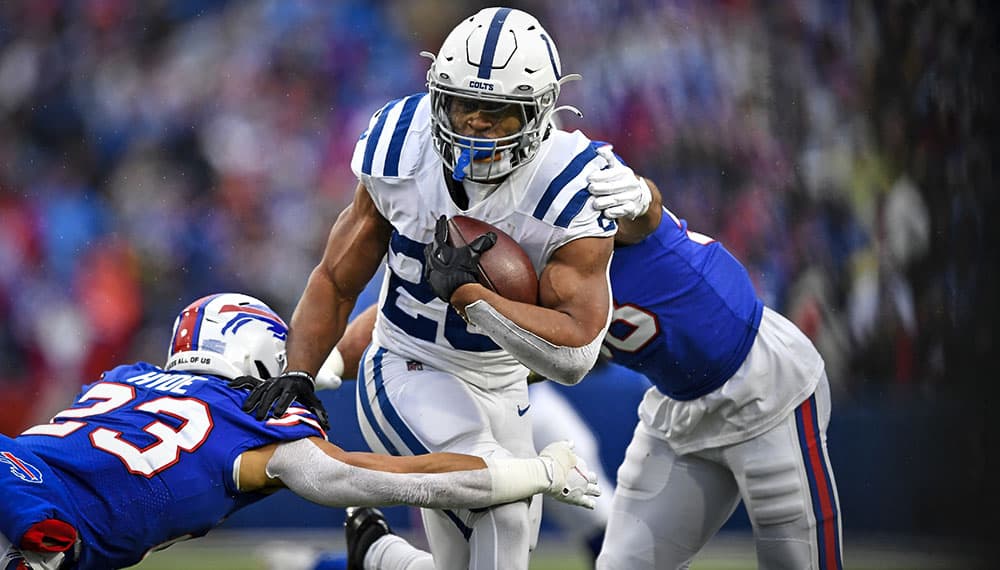 WOW! We are doing the walk of shame after our NFL Week 11 Prop Bets went an atrocious 0-5. A couple of the losses were due to some terrible luck, as both Justin Fields and CeeDee Lamb went down with injuries. That’s the kind of thing you can’t plan for.

The other three recommendations were just bad bets. Anyone who has been in the gambling game for any length of time knows that cold streaks happen. The key to surviving a full season is to practice proper bankroll management at all times.

Here are five prop bets that we like for Week 12. Let’s get back in the win column with these. All these lines are from TwinSpires Sportsbook. Be sure to check out our NFL Best Bets for Week 12.

After getting boat raced by the Colts last week, we think the Bills’ defense comes out with a more spirited effort this week on the road against the Saints. The Bills secondary is only allowing 5.4 yards per pass (1st in the league) and 181.8 passing yards per game (2nd). This unit should be able to limit the Saints’ downfield passing attack enough to keep Siemian Under this yardage amount.

Another reason to love this Under is Sean Payton’s play calling. Payton isn’t dialing up the deep passing plays like he used to with Drew Brees at the helm. New Orleans now ascribes to the dink and dunk passing strategy, as they only average 6.5 yards per pass (22nd).

We think Siemian ends up with around 180 passing yards against this stout Bills defense. Take the Under!

We think this number is a touch too low, especially since Zeke is averaging 69.5 rushing yards per game this season. The Cowboys should put forth a focused effort, especially after last week’s lackluster performance against the Chiefs.

Star left tackle Tyron Smith is returning for this game so that should help Elliott go over this total. Offensive coordinator Kellen Moore knows that the Raiders are decent against the pass but they struggle to defend the run.

Dallas ranks 7th in the league in yards per rush while Las Vegas ranks 25th in yards per rush allowed. The Raiders also allow 132.1 rushing yards per game which ranks 29th. We see Zeke having a huge game as the Cowboys get back on track this week.

This number looks way too high at first glance. Hilton hasn’t played much all season because of injuries. He hasn’t gone over this yardage total since Week 6 against the Texans.

Hilton has only been targeted five times over his last three games so Frank Reich doesn’t seem to have him as a focal point in the Colts’ offense. Tampa Bay’s secondary only allows 6.2 yards per pass so they do a decent job of limiting big plays.

We just don’t see Hilton doing much as the Colts prefer to pound the rock with Jonathan Taylor as much as possible. You got to think that will be the game plan on Sunday, as the Colts would love to keep the Bucs’ potent offense off the field. Hilton may get a catch or two but we are banking that they’ll be short ones.

We hate laying this kind of chalk but think the line should be around -250 or so. The Saints do a fabulous job of stopping the run but they struggle to defend the pass.

Offensive coordinator Brian Daboll knows that he’ll have to dial up a lot of passing plays to beat this Saints defense. This should mean a big day for Allen, who will be focused after a rough outing against Indy last week.

A deep dive into the game by game stats shows that Allen has thrown at least two TD passes in 8 out of his 10 games this season. The Saints secondary ranks 25th in yards per pass allowed and 22nd in passing yards allowed per game. We think Allen throws for at least 3 TDs in this game so take the Over!

Why the heck is this line so low? Sure, the Bucs have a tremendous rush defense but Taylor has been on a major roll of late. The former Wisconsin star has run for at least 116 yards in each of his last three games.

We know that the Bucs rank 1st in the league in rushing yards allowed, but it won’t matter in this one. The Bills have a pretty good rush defense and Taylor had no trouble gashing them for 185 yards last week. There’s no reason to think Taylor won’t crack at least 90 yards rushing in this game.

The Colts’ offensive line is playing with a lot of confidence right now, so that makes us love this pick. Like we mentioned above, Frank Reich knows that he does not want to get into a shootout with Tom Brady and the Bucs offense.

The Colts will give Taylor plenty of carries to try and win the time of possession battle. Why not ride the NFL’s leading rusher with this low of a yardage total? Best of luck this weekend with all your action and Happy Thanksgiving!