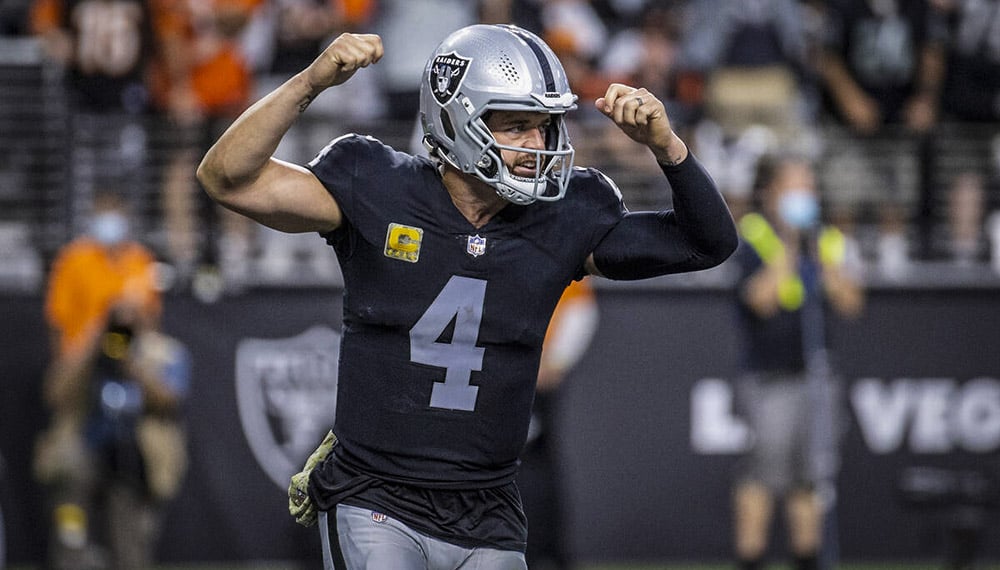 Our NFL Prop Bets bounced back with a nice 4-1 record in Week 12. We’ll try to keep that positive mojo going in Week 13.

Here are five prop bets that we love for this Sunday’s NFL slate. All these lines are from TwinSpires Sportsbook. If you want more NFL action, check out our NFL Best Bets for Week 13.

This may be our favorite prop play of the week. What a devastating loss for the Colts last week! They just couldn’t slam the door on Tom Brady and the Bucs’ fourth-quarter comeback!

Expect Indy to come out flat as a pancake after that heartbreaking loss. We don’t see Wentz doing much damage in this game. Surprisingly, the Texans are only giving up 242.5 passing yards per game (15th in the league).

The way to attack this Houston defense is on the ground, as they rank next to last in rushing yards allowed per game (135.6). That means Frank Reich should be giving a boatload of carries to his workhorse, RB Jonathan Taylor. We see Taylor getting at least 30 carries and for the Colts to follow a somewhat vanilla game plan in this game.

This means that Wentz won’t get too many opportunities to throw the football, which should help our case for his passing yards to stay Under 247.5. A deep dive into Wentz’s yearly stats shows that he’s only averaging 232.5 passing yards per game.

Wentz may have thrown for 306 yards last week against the Bucs, but he only threw for 106 yards against the Bills and 180 yards against the Jags, respectively. We see Wentz finishing with around 200 passing yards in this game so the Under is the only way to play this one!

Just in case you haven’t been paying attention, Mixon has been on a serious tear of late! The former Oklahoma star ran wild for 165 yards against the Steelers last week. He ran for 123 yards against the Raiders the week before that.

We are betting that Mixon continues his hot streak against this Chargers defense, whose front seven flat-out stinks against the run! The Chargers rank dead last in rushing yards allowed per game (145.3). They also rank 29th in yards per rush allowed (4.7).

Cincy may not be a prolific running team, as their rushing stats are pretty mediocre this season. However, with Mixon’s current form we see him getting to 100 yards fairly easily in this one. Take the Over!

What is wrong with the Steelers this year? Big Ben is finally showing his age and the offensive line is having a tough time blocking any defender that has a pulse.

Roethlisberger’s lack of arm strength is one of the reasons we like Najee Harris to catch at least four passes against the Ravens on Sunday. How do you remedy a QB with a diminished arm and an offensive line that is struggling? Call more screen passes!

Even though Pittsburgh’s offense has been awful two out of the last three weeks, they have still been making Harris a part of the passing game. In fact, the Steelers have targeted Harris 15 times over the last three games.

We think that Harris will catch at least five passes in this game. The Ravens defense is great against the run but awful against the pass. Offensive coordinator Matt Canada should dial Harris’s number with plenty of screens and swing passes.

Carr was brilliant against the Dallas Cowboys on Thanksgiving Day, as he carved them up like they were a Thanksgiving turkey! That win was huge for the Raiders and we see them building on that positive momentum against Washington this week.

The former Fresno State star should be able to throw at least two touchdown passes against this lackluster Washington secondary. It does hurt that tight end Darren Waller is listed as doubtful to play. Veteran speedster Desean Jackson has also been limited in practice this week for Las Vegas.

However, this Washington defense is giving up 2.4 passing touchdowns per game, which ranks dead last in the NFL. There’s no reason to think that Carr won’t go over this number of touchdown passes. It is a bit juicy, but we still think that the Over is the best way to play this one.

This prop bet is kind of correlated with our Joe Mixon prop from earlier in the article. We think Zac Taylor will try to run the ball down the Chargers’ throats all afternoon long since that’s their main defensive weakness!

This should lead to fewer passing attempts for Joe Burrow, as long as Mixon and the running game do their jobs well. Sometimes props are all about breaking down the math.

If you break down Burrow’s numbers through the first 11 games, he is only averaging 30.8 passing attempts per game. That’s nearly three less than this posted total. That’s a large amount of value, at least in our eyes.

When you look at the Chargers, most teams always try to pound the rock against them. Through the Chargers’ first 11 games, their opponents have only averaged 31.2 passing attempts per game.

Again, that points to some value on the Under in this prop! Best of luck with all your NFL Week 13 action!