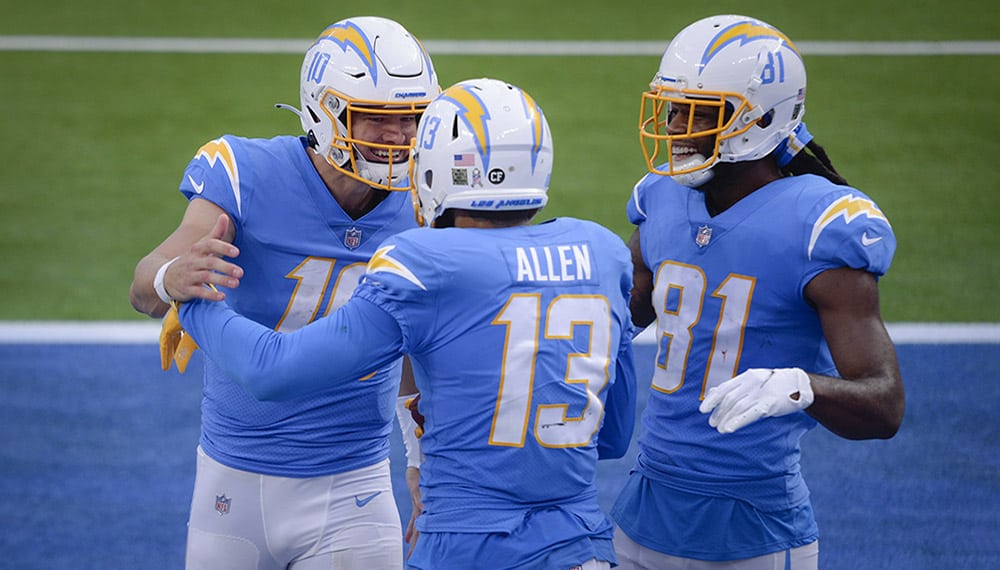 Let’s walk through strategy and lineup selection for the $20 entry Week 8 $3.5M DraftKings Millionaire Maker. Whether you are a single lineup player new to daily fantasy or max entering and looking for an extra edge, the stacks and players suggested below could be the key to unlocking the million-dollar prize.

The most important thing to remember in a top-heavy payout contest of this size (207,120 entries) is that you need to balance the goals of trying to select a lineup that optimizes points while also minimizing ownership, as each player you use becomes less valuable the more they appear in competing lineups.

DFS players will hesitate to stack the Chargers in a matchup against a Patriots defense that has performed quite well so far this season, especially after Herbert and company delivered an epic clunker in their last game against Baltimore.

However, the Patriots are likely not as dominant defensively as they seem. Through seven weeks of the season, they have already faced the Jets twice, the Dolphins, and the Texans. Miami is 6th worst in the NFL in offensive scoring, Houston is 2nd worst, and the Jets are dead last. It is impossible to find a better defensive schedule than the one New England has played so far.

For the Chargers, if we eliminate the anomaly against the Ravens, Los Angeles is averaging an absurd 28.4 points per game this year. One bad game is no reason to avoid a stack. With Mike Williams starting to show signs of the injuries and inconsistency that have prevented him from being a star in the past, this is a great time to turn to Keenan Allen for likely lower ownership and $1200 less in salary. This will be an unpopular pair with some significant upside.

The Broncos will be overlooked in Week 8 despite creating incredible salary flexibility and facing a Washington defense that has struggled mightily against the pass. While Bridgewater may not be the flashiest option, consider that this is a slate without QBs such as Patrick Mahomes, Kyler Murray, and Lamar Jackson.

Teddy’s salary is two-thirds of the price of the highest-priced QB on the slate (Josh Allen, $8100). At a fraction of the price of the premium options available on this slate, which aren’t as dominant as the QBs typically found in this range, Bridgewater doesn’t even have to produce an out-of-this-world performance to be an excellent tournament play.

Fant is in an almost identical situation, with the premier TEs missing from the main slate this week. Neither Travis Kelce nor Darren Waller are options this week, giving Fant a much more reasonable path to being a successful TE play. His price is also cheap, and he’s had a strong season so far, including being 5th in the NFL for TE receptions with 35. Pairing Bridgewater and Fant will offer your lineups unique positioning in Week 8.

There has been a little more inconsistency than expected for Diggs, and the game script could be an issue if the Bills run the Dolphins off the field, but those concerns should only work to further limit interest in one of the top WRs in the NFL in an incredibly soft matchup.

The worst thing about Michael Carter is that he’s on the Jets. Zach Wilson’s injury may end up helping Carter here. Carter quietly caught 8 passes on 9 targets against the Patriots last week in addition to leading New York’s rushing attack. Mike White is likely to go into check down mode quite frequently, which could result in significant receiving numbers for Carter even in a less than ideal matchup against an up-and-coming Bengals team. At this price, if Carter can replicate his receiving performance from last week and produce anything on the ground, he will be an excellent play.