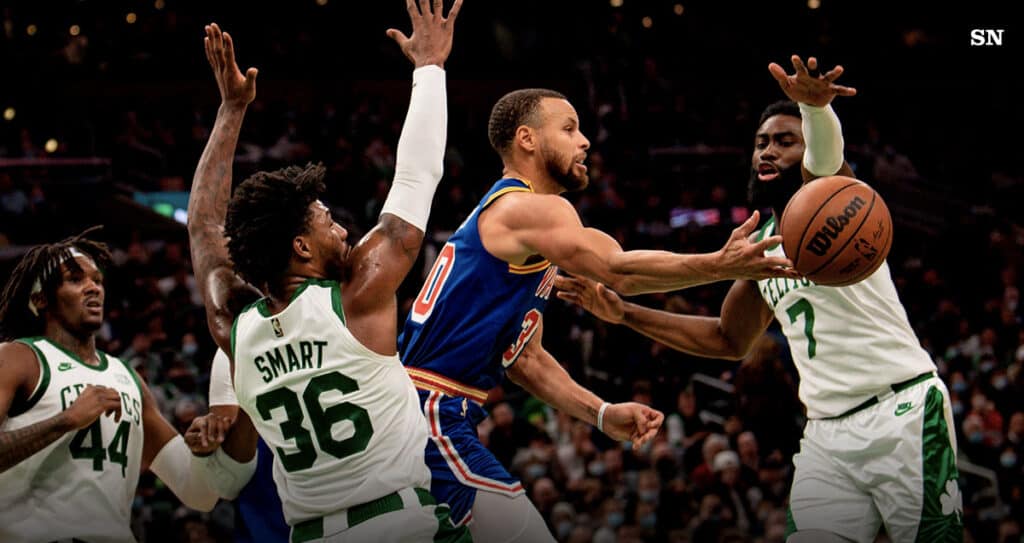 Four player props worth targeting for Game 2 of the NBA Finals.
By Matt Dalby on June 5, 2022

The Golden State Warriors will look to even the series as 4 point favorites over the Boston Celtics in game 2 of the 2022 NBA Finals. There are loads of player props available for tonight, but we will highlight our 4 best bets in this article. Before jumping into our picks, take a look at this special offer from Underdog for game 2, which includes a 100% deposit bonus and Steph Curry at 0.5 made three pointers!

Wiggins has consistently topped this number throughout the playoffs and has the one matchup we think the Warriors can consistently exploit in this series. Boston struggles to defend opposing SG/SF, but is elite defending every other position. Wiggins has scored at least 16 points in 6 of his last 7 games, and has mixed in 3 double-digit rebounding performances in that stretch.

Tatum struggled to score in game 1, which has been a story throughout his career against the Warriors. He has topped 26.5 points just 3 times in 11 career games against Golden State. Combine that with the fact that the strength of this Warriors defense is in defending the 2/3 positions, and we think Tatum will be more of a distributor again here in game 2. While Tatum has had a great postseason, he has topped 26.5 points in just 3 of his last 6 games.

Horford has failed to put together back-to-back scoring games this postseason, and is too reliant on the 3-pointer for us to think he can replicate his game 1 success tonight. He's never rebounded well against Golden State (5.5 RPG this season), and we expect the Warriors to do a considerably better job defending him on the perimeter in game 2.

Smart has topped 14.5 points in 6 straight games against the Warriors, averaging just over 18 PPG over that stretch. Golden State struggled to defend the point guard position over the past three months, allowing the third-most PPG to the position. We know Smart has battled through injuries throughout the playoffs, but has gone for 15+ in 7 out of his last 9 games that he has played at least 30 minutes. We bet he gets there again tonight and will take the over here.