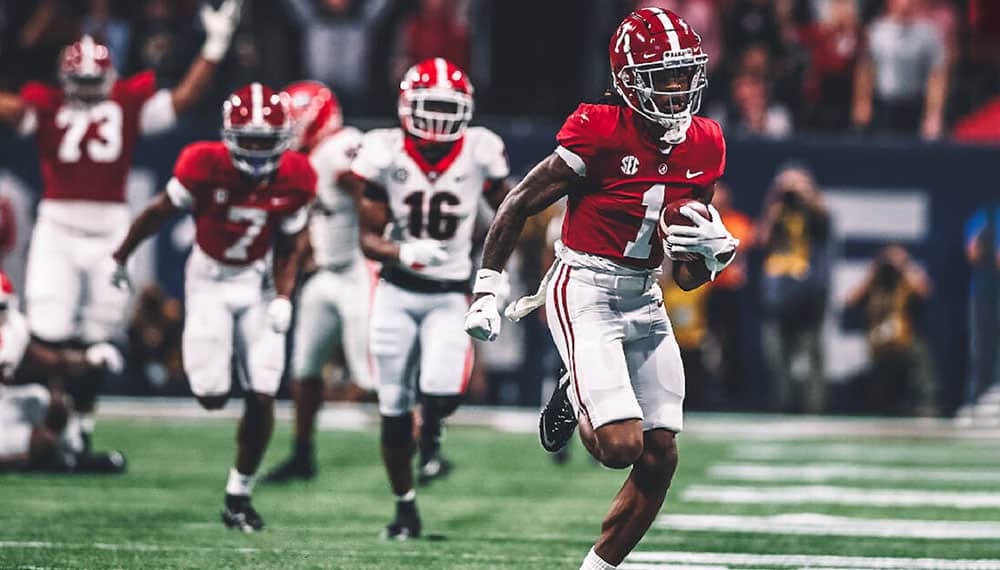 In our last post, we did a full breakdown of the title game and gave out our Best Bet. Let’s add to that by giving out 5 player prop bets to make for the national title game on Monday, January 10.

This is our favorite prop bet on the board simply because Williams will be the best receiver on the field on Monday night. How this kid did not start at Ohio State is beyond us? Williams runs a 4.39 second 40-yard dash and NFL scouts are already drooling at the possibility of drafting him.

The 6-2 189 pounder from Saint Louis has caught 75 passes for 1,507 receiving yards and 15 TDs this season. Quick math tells us that’s an average of nearly 108 receiving yards per game. That means there is clear value in taking Williams to go over this receiving yardage number of 102.5.

Williams torched this Georgia secondary for 184 receiving yards during their first meeting back on December 4. There’s no reason to think the Bulldogs will fare any better against Williams in this contest. Take the Over!

This bet is a little tougher to make, especially since Robinson tore up the Cincinnati Bearcats defense for 204 rushing yards in the Cotton Bowl. However, nobody has been able to run on this insanely talented Georgia defense all year long. Robinson was held to only 55 rushing yards during the first meeting between these two teams.

It’s almost impossible to generate any type of consistent running game against Georgia’s huge defensive line. Guys like Jordan Davis and Devonte Wyatt do a fabulous job at the nose tackle positions of plugging the middle. Linebackers Nakobe Dean and Quay Walker also do a fine job of limiting big runs.

The only way Robinson has a shot at going over this yardage total is if Alabama goes up by two or three scores and decides to try to milk the clock. Since we see this game being close throughout, we don’t think Robinson will get enough carries to go over the 77.5 number. In all likelihood, both teams will have to rely more on the pass than the run in this game, especially since both teams have stout rush defenses.

Bowers is Stetson Bennett’s favorite target and, at 6-4 and 230 pounds, he’s an absolute nightmare for linebackers or safeties to defend. Alabama had a rough time keeping Bowers under wraps in the first meeting as he went off for 10 receptions and 139 receiving yards. The talented young freshman could put up similar numbers in this game as well.

Our only concern with this prop bet is that Bowers is a little bit banged up with a nagging shoulder injury. However, all reports have said that it shouldn’t limit his playing time at all in the national championship game. If Bowers is able to play enough snaps, we don’t see him racking up any less than 80 receiving yards in this game.

If Bryce Young brings his usual A game, Georgia is going to have to pass the ball quite a bit just to keep up. If the game plays out that way, Bowers should get plenty of opportunities to easily surpass this yardage total.

The injury to John Metchie has meant more playing time and receptions for Slade Bolden. The 5-11 junior isn’t flashy, but he has great hands and Bryce Young trusts him in crucial situations. With Jameson Williams taking up much of the Georgia secondary’s attention, Bolden has a chance to have a big game.

Bolden racked up 54 receiving yards in the SEC Championship Game against Georgia. He didn’t get as many targets against Cincinnati in the Cotton Bowl and he finished with only 31 yards. However, that was due to the fact that Bama decided to run the ball 47 times against the small Bearcats front seven.

We expect Bolden to have a more prominent role in the offense in this game, especially since Georgia plays the run so well. With this low of a yardage total, Bolden has the potential to surpass this number with only two or three receptions.

Zamir White is one of our favorite running backs in the country to watch. The 6-foot junior has plenty of speed and the ability to make defenders miss. However, Alabama only allows 2.6 yards per rush so White could have a hard time doing much in this game.

Alabama held White to only 27 rushing yards during the first meeting. White was a little bit more productive against Michigan in the Orange Bowl but he still only picked up 54 yards on the ground.

Another reason we like White to go under this yardage total is because he has to share carries with his buddy James Cook. Cook actually had more rushing attempts than White in the SEC Title Game. Junior Kenny McIntosh is also getting a few carries each game, which further limits White’s ability to accumulate big numbers.

Our prediction is that White ends up with about 35 rushing yards in this game against the stingy Alabama rush defense so take the Under. Thanks so much for reading our college football posts each week. We are already looking forward to next season!