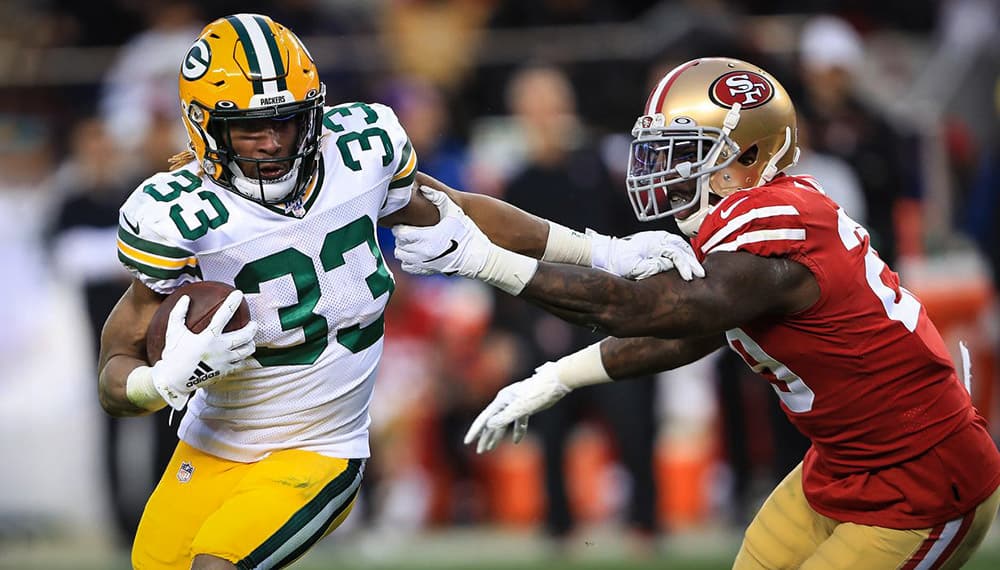 We’ve made it to the Divisional Round of the NFL Playoffs, which means that only 8 teams are left in the race for the coveted Lombardi Trophy. One of the most intriguing matchups this weekend pits the San Francisco 49ers against the Green Bay Packers. These two teams have had some iconic battles in the past, and this game has all the makings of an instant classic!

Prop betting has skyrocketed in popularity over the last couple of NFL seasons because it makes a game even more entertaining to watch. Here are five prop bets that we think have value in this 49ers vs. Packers rivalry game. If you’re interested in which side we like in this matchup, check out our Betting Guide and Pick article.

Have you ever seen a wide receiver that runs as angry as Deebo Samuel? This guy is always in “Beast Mode” and ready to run right through whatever defenders happen to be in his way. The former South Carolina Gamecock was selected to his first-ever Pro Bowl this season.

We love taking Samuel for an anytime touchdown in this game because of the variety of ways that he can score. The 6-foot 215 pounder caught 6 touchdowns during the regular season. He also ran for 8 touchdowns.

Green Bay has a very good secondary but we think they could have some problems with Samuel in this game. Even if the Packers can slow down Samuel in the passing game, we all know the Niners are going to hand the ball off to him several times.

Green Bay has struggled against the run all season long, as they give up 4.7 yards per carry (31st in the league). That stat alone tells us that the Packers could give up a couple of rushing touchdowns in this game. We are betting that Samuel gets one of those scores!

We admire how Jimmy G has persevered this season, despite the constant chirping from some folks that say Trey Lance should be the starter. Garoppolo played pretty well against the Cowboys last week, but he still only ended up with 172 passing yards. We see a similar result transpiring this week.

Kyle Shanahan is a masterful play-caller, and he knows that the main way to attack the Packers’ defense is by pounding the rock. The Niners ran it 39 times last week against Dallas. If that number stays the same this week, Garoppolo’s passing yardage will easily stay Under this amount of 244.5.

Sure, Garoppolo has averaged 254 passing yards per game this season, which is a bit of a concern for us. However, the poor guy was already dealing with an injured thumb. Now, reports are coming out that he’s dealing with a banged-up shoulder as well.

There’s no way Garoppolo will be close to 100% healthy for this game. That is the main reason why we think this yardage total is quite a bit inflated. Take the Under!

Can you believe that Kittle only had 1 catch for 18 yards against the Cowboys last week? We don’t see the 3-time Pro Bowler putting up back-to-back disappointing performances, especially in the playoffs. If Kittle were a stock, this is the perfect opportunity to buy him at a low.

The former Iowa standout is averaging 65 receiving yards per game this season. He’s also averaged 83.7 receiving yards in three career games against the Packers. Both of those stats say that there’s a boatload of value in this low number of 48.5 receiving yards.

We expect the Packers’ corners to limit the Niners’ receivers in this game. Rasul Douglas and Chandon Sullivan should do a decent job of slowing down Deebo Samuel and Jajuan Jennings. If that happens, Jimmy G should look more in Kittle’s direction over the middle of the field.

The emergence of A.J. Dillon has hurt Jones’ production. The former UTEP star only ran for 799 yards this season, which was by far his lowest amount of rushing yardage since he became Green Bay’s primary running back.

San Francisco only allows 4 yards per rush, which ranks 7th in the league. If the Packers want to put up points in this game, Matt LaFleur will have to put the game in the hands of another Aaron (Rodgers). Take the Under!

This one is a little bit juicy, but we strongly believe it’s the right side. Aiyuk had a nice game against the Cowboys with 5 receptions and 66 receiving yards. However, we doubt the former Arizona State Sun Devil will be that productive in back-to-back weeks.

During the regular season, Aiyuk only averaged 3.3 receptions per game. He was also only targeted 4.94 times per game. Both of those numbers suggest that there is a fair amount of value in the Under 4.5 receptions, even with the extra juice.

Like we said before, we see San Fran establishing the run early in this game and sticking with it. That should result in a limited number of throws for Jimmy G and the Niners’ passing game.

The few times that Shanahan calls a passing play, look for Garoppolo to target either Samuel, Kittle, or Jennings. We’ll drink the juice and take Aiyuk to stay Under 4.5 receptions. Best of luck with all your NFL Divisional Round prop bets!