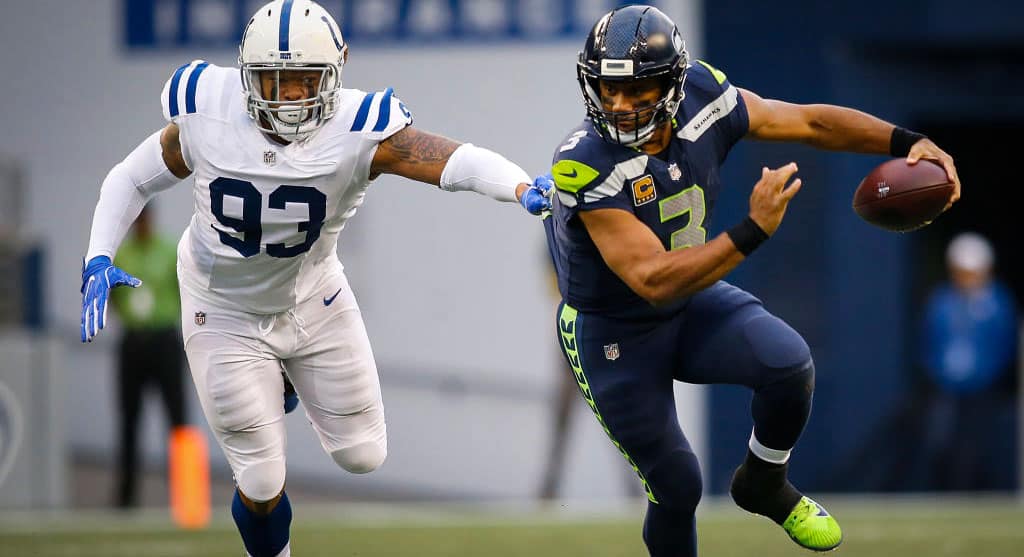 Best Odds and Bets for Seattle Seahawks at Indianapolis Colts

An interconference matchup between two teams that combined to win 25 games last season, no week 1 game in the one o'clock timeslot is more intriguing than the Seahawks at Colts. From the status of Carson Wentz to the new high-tempo Seahawks offense, there is no shortage of storylines here.

The Wentz injury moved the line in this week 1 game from Indianapolis -3 to Indianapolis +3. The recent headlines that Wentz could potentially be back for week 1 have moved it back to Indianapolis +2, but is that enough of an adjustment? We will share our thoughts and favorite bets from this Week 1 matchup.

TwinSpires recently announced a new promotion for week 1 of the NFL season: place any $10 bet, get $250 back in free bets. Here is how to take advantage of this offer if you do not already have a TwinSpires account:

Current Odds for Seahawks at Colts

At Eat Watch Bet, we shop the lines of every game for you! The live odds below display the best available spread for both the Colts and Seahawks, as well as the highest under and lowest over bets available. Use our free odds tool to ensure you get the best line available with all of your week 1 bets.

Less than three weeks ago Indianapolis coach Frank Reich stated in an NFL.com interview, that ‘this is Carson Wentz's team’. A few days later Wentz went down injured during the first week of training camp and had to undergo foot surgery. While at this point it seems possible that the Super Bowl champion could make a return before Week 1, it is much more likely that either Jacob Eason or Sam Ehlinger will start in QB for Indianapolis’s home opener.

Out of the two backups, Eason seems like the more likely candidate to start with projection systems seeing him as an average replacement-level NFL QB. Both youngsters have been fairly impressive based on what we’ve seen from them in camp and through the preseason, but beat writers are unanimously saying that while Ehlinger is the safer floor option, Eason is the arm with the higher upside.

What to Expect from Seattle

Seattle will - of course - start Russel Wilson at the helm, who is still forecasted to be a top-five QB in his age 33 season. Wilson will have a plethora of weapons available headlined by wide receivers DK Metcalf and Tyler Lockett.

The receiving corps was rounded out this offseason with the additions of tight end Gerald Everett and rookie D'Wayne Eskridge. Eskridge projects to be the team’s WR3 at this point. The running back core is unchanged and we will likely see a lot of both Chris Carson and Rashaad Penny.

With Seattle essentially running it back, it is fair to expect the Seahawks to have a solid offense. Wilson's team had an impressive 68.9% pass completion rate (4th best in 2020) and the Seahawks were reaching first downs on 38.4% of their pass attempts. The rushing attack was also impressive with 4.8 yards averaged per carry (7th best) and 1971 total rushing yards. After focusing on the passing game in 2020, coach Pete Carrol said that the team is aiming to run the ball more efficiently in 2021.

Seattle finished last season with a 12-4 record and the 5th-best team DVOA fueled by their 6th-ranked offensive DVOA and 3rd-ranked special teams DVOA. The defense was close to league average according to most metrics, but that should be enough going up against a rookie QB in Week 1.

What to Expect from Indianapolis

In 2020 the Colts were ranked around league average offensively, but defensively they were a borderline top-five unit. That is especially true to their top-notch run defense. Indianapolis only gave up 3.7 yards per carry and 1448 total rushing yards, both stats grade as the second-best through last season. Seattle focusing on the run game against such a solid run defense would probably not be the best idea, especially as the Colts pass defense only grades around league average.

Offensively though, this Colts team doesn't seem like a scary bunch. The run game is expected to go through Jonathan Taylor, who had a monster rookie season for the Colts, but the receiving core consisting of Michael Pittman Jr., T.Y. Hilton, and Zach Pascal is just a mediocre unit. NFL analyst site PFF graded the Colts wide receiver depth chart 71.3 last season, which ranks 25th in the league. The best player of the group is T.Y. Hilton and he is grading just above 75 while coming off back-to-back down years. Hilton is also entering his age 32 season and is not expected to get better.

Give us the Seahawks and the points! Continuity is everything early in early season NFL season and the Seahawks have a veteran roster with many returning pieces, while the Colts only have a mediocre WR core and a huge question mark at QB.

We are hoping that Pete Carrol will once again ‘let Russ cook’ resulting in the overall much better offense coming away with the victory. If you can grab a +3 on the spread, we would take the points, otherwise, a money line play is your best value!