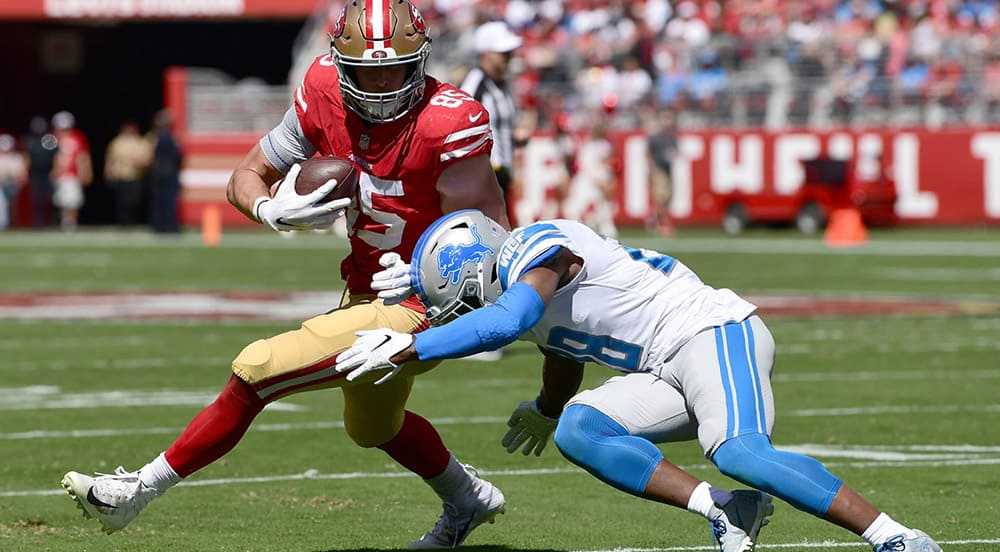 Best Odds and Bets for 49ers at Lions - NFL Week 1

On paper, the week 1 matchup between the 49ers and Lions looks like the biggest mismatch in this week 1 slate. When healthy, San Francisco is loaded on both sides of the ball. On the defensive side, they get both Dee Ford and Joey Bosa back from injuries that ended their 2020 campaigns in weeks 1 and 2 respectively. Despite losing two Pro Bowl-caliber defensive ends in the first two weeks of the season, San Francisco finished 2020 as the league's number 5 overall defense.

With one of the better offensive lines in football and one of the league's most talented RB's, the focus of the Lions' offense will be their rushing attack. Will Detroit be able to move the ball against this defense? If they fall behind early, will Goff have any chance of moving the ball with the league's worst receiver corps?

Before we break down our thoughts on this game and identify our favorite bet, here is a look at an exclusive offer from our preferred sportsbook partner, PointsBet:

PointsBet recently announced every week 1 NFL spread will have +100 odds. Whether betting on the Lions or 49ers in this matchup, you pay no juice. As an added bonus, new players receive $125 in free bets after placing their first $10 wager.

What to Watch for From the 49ers in Week 1

Jimmy Garoppolo or Trey Lance? This is the biggest, and likely only question San Francisco fans are interested in going into their Week 1 matchup against the Detroit Lions. Even after two full preseason games, 49ers head coach Kyle Shanahan said that he has nothing to announce yet when it comes to the team’s starting QB in week 1. While beat writers are assuming that it will be Jimmy G at the helm, it is fair to say, that Trey Lance did look worthy of being the 49ers' week 1 starter in preseason action.

The number three overall draft pick out of North Dakota State University finished his first preseason outing completing 5-of-14 passes for 128 yards, one touchdown, and no interception against the Chargers. Lance followed his first game with an 8-of-14 outing where he threw for 102 yards, two touchdowns, and one interception against the Chiefs. Kyle Shanahan implied that Lance hasn't shown so far that he is worthy of being under center and experts believe Lance will be used off the bench in short-yardage and goal-line situations.

No matter who will draw the start in QB, he will have quality targets within this strong receiving core. The 49ers have a dangerous one-two WR punch of Deebo Samuel and Brandon Aiyuk going into the season. Samuel averaged 9.6 yards after the catch in his two seasons and Aiyuk has a similar upside. The 23-year-old had an 80.8 receiving grade in the 2020 season, the second-best in the league among all sophomores.

The duo is supported by George Kittle, who is a top-three tight end in the league. Kittle has graded at least 84.0 in three straight seasons, including a ridiculous 94.4 grade back in 2019. Kittle is easily the top fantasy option on the team and is forecasted to have over 100 yards in the season opener against Detroit.

The run game will be going through Raheem Mostert. Moster is explosive, but had ankle issues through 2020 and has been held out of multiple practices and a preseason game as well. With Mosert’s injury history it is fair to expect third-round rookie Trey Sermon to get a lot of opportunities through the season. Multiple analysts are expecting a big season from Sermon and he could even end up splitting the backfield 50-50 with Mostert.

The 49ers only graded 20th in the league in offensive DVOA to go with their 6th-best rank on the defensive side of the ball. If all three of their top receivers can stay healthy and Sermon can step up to complement Mostert, the team could make serious improvements and finish in the top ten offensively.

What to Watch for From the Lions in Week 1

With Matthew Stafford leaving for the LA Rams, the Lions are starting Jared Goff at QB. Goff is a slight downgrade from Stafford, especially knowing that he needs a strong offensive line to perform, which the Lions don’t have.

NFL analyst site PFF ranked Detroit’s receiving core second to last in the league (only trailing Houston) going into the 2021 season. The Lions lost Kenny Golladay through the offseason and besides 6-foot-4 Tyrell Williams (who averaged 16.1 yards per reception in 2019 with the Raiders) and tight end T.J. Hockenson they really don’t have too much firepower. We have to give credit to Hockenson though as he graded 75.4 last season, the 10th best among all tight ends.

No matter who the 49ers QB is, we have to back San Francisco against the spread in the season opener. The 49ers have an elite defense and their offense could look much improved in the new season. Detroit ranked dead last in the NFL in defensive DVOA last season and we are expecting the team to take a big step back offensively after losing their QB and their top receiver in the offseason. Lay the points!

Remember to subscribe to receive all of our weekly NFL articles direct to your inbox in one email each Friday. As a bonus, subscribers will also receive exclusive sportsbook offers throughout the season.