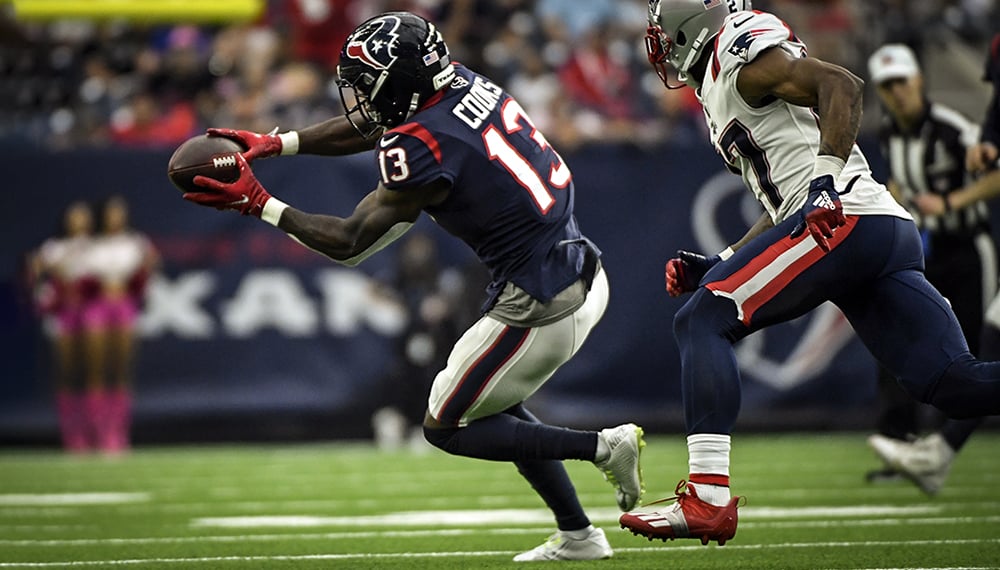 Week 6 of the NFL season kicks off tonight with the defending champion Tampa Bay Buccaneers visiting the Philadelphia Eagles. While we didn’t list any props for that game in this article, check out our full preview for Thursday Night Football.

Here are four prop bets that we think have plenty of value on Sunday. All props listed are from BetMGM Sportsbook.

If you haven't tried the PointsBet sportsbook, then this offer is for you. PointsBet is offering all new players a $200 bonus with any $20 NFL or CFB wager. Here is how it works:

Prescott is off to a great start this season and he torched the New York Giants secondary for 302 passing yards last week. However, we don't think he gets anywhere near those numbers this week against the New England Patriots. Though this is a different era for the Patriots, Bill Belichick's pass defense is still pretty solid.

The Pats’ secondary ranks 13th in the NFL in yards per pass allowed (6.8). This unit also ranks 5th in the league in passing yards allowed per game. Prescott may not be able to hit as many deep passes against this stout unit.

Cowboys defensive coordinator Kellen Moore knows that this is a tough secondary, so he will focus more on trying to get the running game going. That should mean plenty of carries for Ezekiel Elliott and Tony Pollard, but fewer throws for Prescott. This helps our case for the under.

While we aren't crazy about the -140 juice on this bet, this is the perfect time to jump on the Najee Harris train. Though the former Alabama star has had a slow start to the season, he had a breakout game last week versus the Denver Broncos and ran for 122 yards. We think Harris will repeat that performance or possibly do even better against this awful Seahawks rush defense.

Yes, the Legion of Boom days are definitely over in Seattle. The Seahawks rank 24th in the NFL in yards per carry allowed (4.5) and 31st in the league in rushing yards per game allowed (145.2). Needless to say, Harris should have a field day as long as the Steelers offensive line can give him enough space.

Look for offensive coordinator Matt Canada to give Harris plenty of carries to help take the pressure off of Big Ben. This is our favorite prop bet on the board this week. This should be an easy Over!

Cooks has struggled the last couple of games, but we look for him to get back on track this week against an awful Colts secondary. The Colts are coming off a devastating loss in overtime on Monday Night Football against the Baltimore Ravens. Though Indy head coach Frank Reich was very positive in the postgame press conference, you know this team is reeling mentally from that loss.

Indy’s pass defense flat-out stinks. This unit is giving up 8.5 yards per pass, which is 29th in the NFL. They are also allowing 260.8 passing yards per game, which is 20th in the league. The Texans should be able to generate plenty of offense against Indy.

Texans rookie quarterback Davis Mills is looking more comfortable under center each week. He played an excellent ball game against the Patriots last week and could put up a similar performance on Sunday. Look for Mills to try and hook up with Cooks on several deep post patterns.

Cooks is by far the best wide receiver on this Texans squad. If you go back over Cooks’ numbers, he went over this 62.5-yard mark in each of the first three games of the season against Jacksonville, Cleveland, and Carolina. We see Cooks having a big day against this subpar Colts secondary. Take the over.

Though Trevor Lawrence has struggled so far in his rookie season, the former Clemson standout has looked much better over the last couple of games. We think this could be the week Lawrence gets his first-ever NFL win. Lawrence has all the tools and is slowly coming into his own as an NFL QB.

Lawrence has completed over 20 passes in three games already this season. There's no reason he can't do that against this terrible Miami Dolphins secondary. The Fish were gashed last week by the Bucs, and they showed some signs of quitting. Miami also has a ton of injuries, which makes matters even more difficult for them.

Lawrence could have a huge game against this banged-up Miami secondary. The Dolphins are allowing 7.6 yards per pass, which ranks 23rd in the league. They are also allowing 288.6 passing yards per game, which is 26th in the NFL.

This is the early kickoff game in London this week. That is an advantage for the Jags since they are used to playing one game across the pond every season. The Dolphins haven’t played in London since 2017.

We expect Lawrence to complete around 25 passes and for Jacksonville to get their first win of the season. Take the over and cash an early ticket on Sunday morning. Best of luck this week!