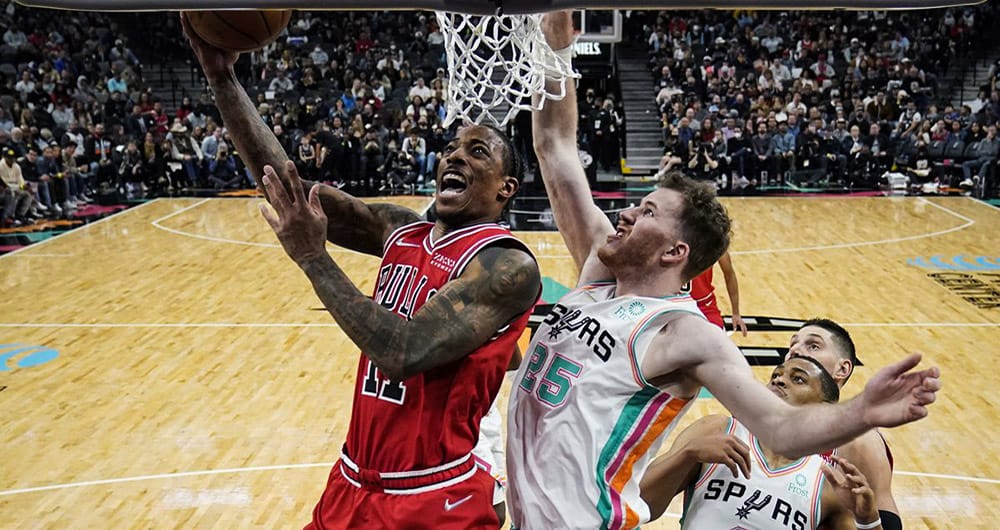 With the NFL season officially behind us, we shift gears into the heart of the basketball season. There is only one month left in the NBA regular season, and Monday night's slate features nine games headlined by an NBA TV double header featuring the Spurs at the Bulls and the Warriors at the Clippers.

We have four player prop picks for you tonight, including our first scorer bet of the night. As is always the case, included with each pick is the sportsbook with the best odds for that wager.

We are going back to the well here against the Nuggets who are the worst in the league, allowing 5.89 blocks per game. Robert Williams got there for us last time late in the game, I think our man Mo gets there earlier tonight.

Mo has reach 2 or more blocks in 4 of his last 6 games. The 2 games he failed to get there, were against Phoenix and Portland who are both in the top 10 of least shots blocked per game. In his last game earlier this season, Mo got 2 blocks in the game and we believe he will get there again tonight.

Bobby Portis UNDER 1.5 made 3s

Portis was on a hot shooting streak that began against these Blazers back on February 5th when he went 6 of 8 from deep. He then went 4-5 and 5-9 in his next 2 games from three. However, previous to those 3 games, he had failed to reach 2 threes in 5 straight games.

Portis was just 1 of 5 from three on Thursday night against the Suns. I believe this is the start of another colder shooting for the streaky Portis. One other note, the Bucks are large favorites in this one and if they can put the Blazers away early, it could be less playing time for Portis.

Wood is only averaging 17.7ppg this season and had his lowest scoring total in the last 10 games against this same Jazz team when he finished with 13 points. In the other meeting between these teams, Wood finished with 16, again going under the 18.5 total. Both previous games had Rudy Gobert in the lineup for the Jazz, who is questionable tonight. If he was to go, I think this one stays under again with ease. If not, I still don’t see Wood reaching over 18.

Utah is 10th in the league in points allowed per game and over the last 3 games, they are tied for1st, allowing just 96 ppg. The spread is almost double-digits which is always good for an under as playing time may be limited due to the game being out of reach in the 2nd half.

Well logic and research have not been too kind for us on the first scorer prop lately. However, we are still profitable by 8 units on the play since we began. I am going with straight gut instinct here. DeRozan against his former team who he’s faced just once earlier this year. It took him 12 minutes to get his 1st bucket against them last game, let’s see if he can get off to a much earlier start tonight.

While we have missed on six-straight first scorer props, we are still up 8 units on this bet over the past nine articles. Track each first scorer pick over the last three weeks using the table below: