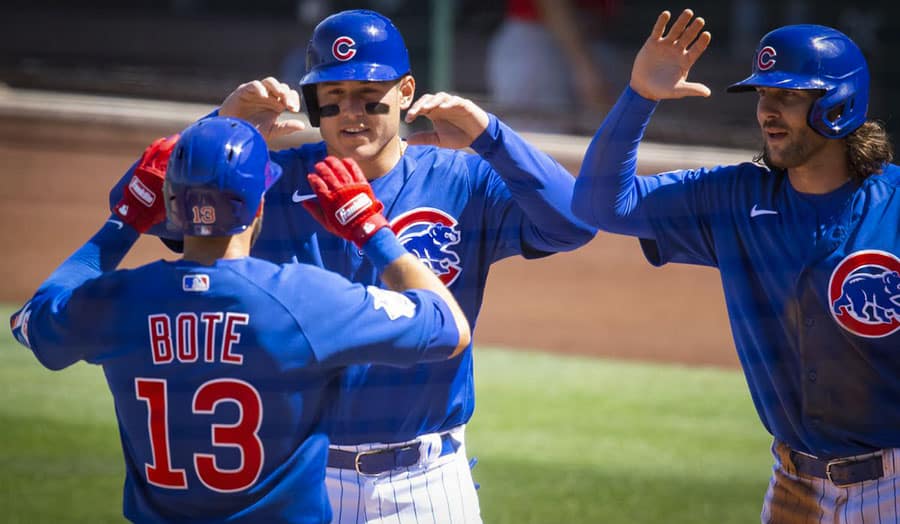 After a Tuesday with no weather issues, we are looking at a Wednesday slate with multiple games that should face in-game rain delays or even postponements. Thankfully the matchups we are getting involved with should play without any issues. Let’s see which sides we are rolling with this Wednesday! As a reminder, you can shop the latest odds to find the best line above each game breakdown.

Get $100 in Free Bets, No Deposit Neccessary!

Padres starter Dinelson Lamet is averaging just 2.3 innings per game so far this season with both of his recent outings getting capped at three innings. He is on a strict pitch count and we cannot expect him to get stretched out any time soon. Lamet also has severe walk issues walking about 10% of opposing batters faced while he is also giving up 40% hard contact to opposing batters. This is not a profile we can get behind, especially not on the road in a role of a slight favorite.

The Cubs are rolling with Adbert Alzolay on the mound. Alzolay has been one of the bright spots of the season so far for the division-leading Cubs. The 26-year-old has a 3.39 SIERA at home with a 26% strikeout rate and only a 5% walk rate. He is missing bats, not giving up hard contact, and has been pitching consistently well at home where he has a .309 wOBA so far this season.

San Diego is a scary offense, but they will likely be without their best bat in Tatis, who got removed from Tuesday’s game due to oblique tightness. Even if he plays on Wednesday he should not be 100% healthy, but it is fair to expect San Diego to keep Tatis out of this game as a precaution.

We are betting on the more trustworthy starter in Alzolay today expecting him to get the W over the Padres. This could be a close game, but Lamet is not nearly as solid as the young star of the Cubs pitching core!

The Minnesota Twins came through for us as winners on Monday and we are going back to the well with them. The road team will put Randy Dobnak on the mound to face a reeling Baltimore team that has only won one game out of their last ten. While Dobnak won’t bring anything special to the table he is a solid league-average arm with a 3.90 SIERA. He forces a lot of ground balls, doesn’t walk anyone, and limits hard contact pretty well.

While lefties can hurt him, Dobnak is great at shutting down the right side of the plate. Coming off a six-inning outing against Kansas City it seems like Dobnak is finally fully stretched out and it is fair to expect a strong outing from him against the Orioles.

Baltimore opted to go with Matt Harvey here. Harvey is pitching on short rest having pitched just three days ago. The veteran arm is losing a grip on the season getting hit around lately and his underlying stats tell us that we shouldn’t expect things to turn around anytime soon. Harvey has a 6.31 ERA and he allows a .371 wOBA at home to opposing bats. His main problem is that due to his decreased velocity he is unable to miss bats anymore leading to an 82% contact rate, which is well below league average.

We will be backing the Twins as road favorites on Wednesday! Dobnak should take care of the Orioles offense and Harvey pitching on short rest is a huge liability.

Sean Manaea on the mound forecasts a great day for fans of the Oakland Athletics. The veteran lefty has been pitching well his season boasting an increased velocity on his fastball. Manaea was hovering around 90 MPH last year and is touching 93 MPH this year which is certainly a sign of him being fully healthy. It is not too difficult to fall in love with Manaea’s offerings as he is boasting a 12% swinging strike rate to go with only a 5.50% walk rate. His 24% strikeout rate should match up well against this Mariners squad that is striking out 28% against left-handed pitching.

The Mariners are countering with Chris Flexen here. Flexen is coming off a strong outing against Texas, but the Rangers are way easier out than what this powerful Oakland team is presenting here. Flexen has an 84% contact rate this year as his pitch mix of four-seamers and cutters is usually not enough to keep the better offenses of the league at bay. Oakland showcased their power through this series and we are expecting that to be the case on Wednesday as well.

With the recent success of the Mariners (7-3 in their last 10 games), we are not asked to pay any extra to fade them with Manaea and a very strong Athletics squad.

Give us Oakland on the money line on Wednesday as slight road favorites as they clinch the series victory over Seattle!