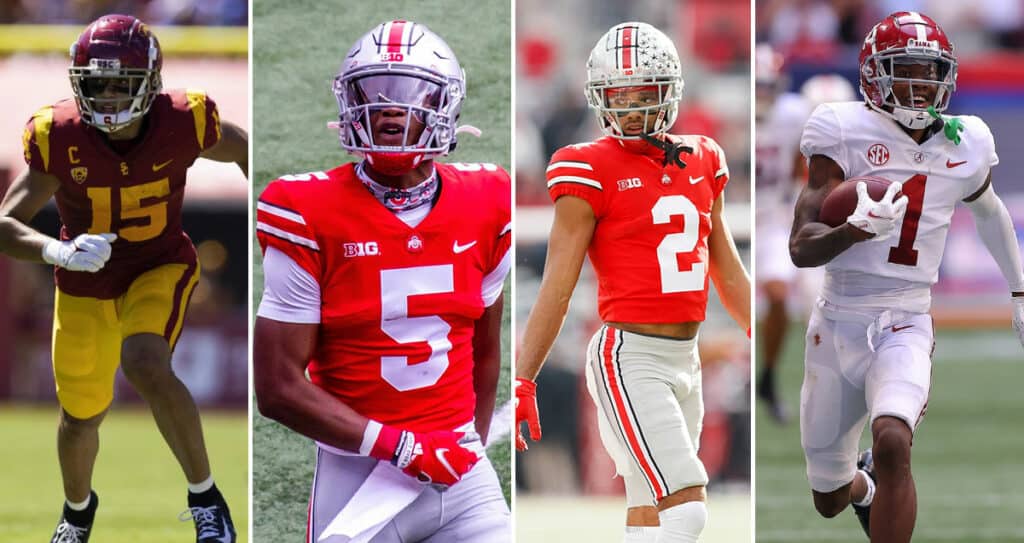 The first round was loaded with WR talent, which are the top fantasy prospects?
By Nicholas Berault on April 29, 2022

With the first round of the NFL Draft in the books, it's time to make some way too early predictions about which first round prospects will be fantasy stars next season. Last year's first round class saw Ja'Marr Chase finish as WR5, Jaylen Waddle as WR17, DeVonta Smith as WR41, Kyle Pitts as TE10, and Najee Harris RB 7.

Before we jump into analyzing the rookies we saw move to new teams last night, here is a recap of the two headliner trades that went down and the fantasy fallout:

Tennessee moved wide receive A.J. Brown to Philadelphia in exchange for the 18th pick last night. Brown moves from one run-heavy offense to another, but the move from Tannehill to Hurts is a definite downgrade. Hurts was PFF's 20th ranked passer last year, while Tannehill has been in the top 10 each of his last 3 seasons.

The Titans drafted Treylon Burks out of Arkansas with the 18th pick. Burks joins Robert Woods (acquired by trade with Rams) and Austin Hooper (free agent) in a totally reworked passing attack.

The move is a massive upgrade for Brown, as he moves to a system and QB better suited to utilize him as a downfield threat, while the presence of DeAndre Hopkins and Rondale Moore should help create favorable matchups.

This move also clears a path to 100+ targets for Rashod Bateman, who will operate as the WR1 alongside Marc Andrews. Expect Devin Duvernay's role to expand this season as well. Bateman moves into high-upside WR3 territory, while Duvernay should be a solid flex option most weeks.

Now let's turn our attention to this year's first round class and the biggest fantasy winners from last night:

London enters the Falcons facility on Day 1 as their top wide receiver to pair with 2021 first round pick, tight end Kyle Pitts. This continues a complete offensive makeover for Atlanta, with Marcus Mariota entering camp as the starting quarterback following Matt Ryan’s departure to Indianapolis. London should step into a significant target share as a rookie so long as his recovery from a broken ankle in October doesn’t prevent him from being fully ready for the start of the season. He and Pitts give the Falcons two legitimate red zone weapons for Mariota to lean on.

The Jets’ selection of Wilson with the 10th overall pick gives them a trio of highly touted receivers for second-year quarterback Zach Wilson to work with. Wilson joins Corey Davis and Elijah Moore to form a receiving corps that will be difficult to cover as long as their offensive line and developing quarterback hold up their ends of the bargain. Regardless, the young group of offensive weapons that the Jets will continue to develop makes an offense largely devoid of fantasy relevance that much more worthy of consideration. Second-year running back Michael Carter may have some more room to operate as well with attention being diverted to another shifty receiver.

New Orleans added a much needed receiving threat with the 11th overall pick in Olave. He averaged more than 15 yards per catch in his college career at Ohio State, scoring 35 touchdowns and racking up over 2,700 yards receiving. His speed is what separates him from others at the position (he ran a 4.39 at the NFL Combine), and Olave’s ability to stretch the field will give NFL defenses another thing to worry about when trying to contain the likes of Alvin Kamara and Michael Thomas. It helps that quarterback Jameis Winston has the arm to keep up with Olave’s speed, too. While he doesn’t project as a PPR machine, his home run ability will make him an enticing rookie prospect in upcoming fantasy drafts.

It’s hard to believe that Williams, Wilson, and Olave were all in the same wide receiver’s room at Ohio State, and then followed one another in succession at the NFL Draft. Williams’ addition makes the Lions offensive depth chart look surprisingly menacing to opposing defenses when you consider he’ll be flanked by Amon-Ra St. Brown, DJ Chark, and T.J. Hockenson with D’Andre Swift coming out of the backfield. The torn ACL Williams suffered in the CFP title game will impact his ability to prepare for the start of the 2022 season, but there is little doubt as to the impact he can make once healthy. More of the Lions players’ fantasy performance rests on quarterback Jared Goff, who struggled during his first year in Detroit.

In what was viewed as a draft class with less top talent at the quarterback position, Pickett became the lone signal caller taken in the first round when Pittsburgh drafted him 20th overall. He’ll likely have the chance to compete against offseason acquisition Mitchell Trubisky in training camp for the starting job to begin the 2022 season as the Steelers begin life after Big Ben. This offense is loaded with skill position talent around the quarterback position, and when in doubt the ball can always be placed in the trusted hands of Najee Harris. Pickett would be in a position to succeed should he get decent playing time as a rookie.