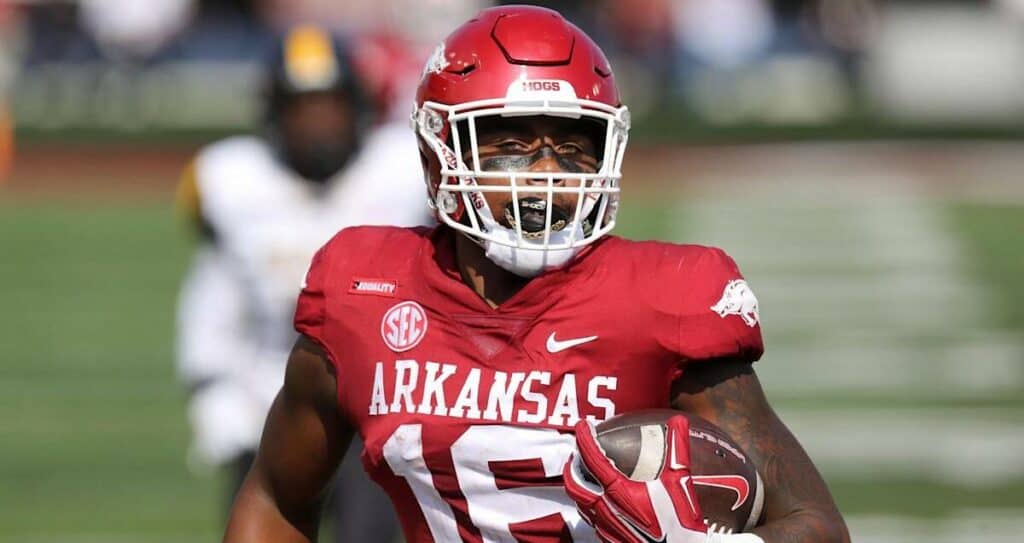 Since the NFL Draft has come and gone, it's time to seriously start preparing for the upcoming NFL season. One way to do that is to analyze how well each team did in the draft. This process will go a long way toward helping you assign a power rating to each respective team before the new season starts.

Best Bet for Offensive Rookie of the Year: Treylon Burks

We were tempted to go with either Kenny Pickett or Drake London in this spot, but we settled on Burks. It's a bit surprising to see Pickett as the favorite, especially since he probably won't be the Week 1 starter for the Steelers. Drake London is an absolute freak, but the Falcons are going to be terrible once again this year so it's difficult to see him posting eye-popping numbers.

We feel that Burks is in a great situation with the Titans, who are a run-heavy team that likes to gouge defenses with the play-action pass. The former Arkansas stud wideout has excellent size (6-3,225) and can out-physical any defensive back in the league. He also runs a 4.5 40, which is pretty impressive for a guy of his stature.

Veteran QB Ryan Tannehill is going to love throwing the deep post and deep go routes to Burks. Assuming that All-World RB Derrick Henry will be healthy in 2022, Burks should have some matchup advantages. When defenses try to load the box to slow Henry down, Burks should have an easier time getting open down the field.

Folks in Nashville were shocked when the Titans sent A.J. Brown to the Eagles in a draft-day trade. However, we think Burks can put up numbers that are similar to what Brown put up during his rookie campaign in 2019 (1,051 receiving and 9 total TDs). If Burks produces that well, he'll get serious consideration for Offensive Rookie of the Year.

Best Longshot for Offensive Rookie of the Year: George Pickens

Lots of people forgot all about Pickens after he suffered a gruesome ACL tear before the 2021 season. The good news is that the former University of Georgia star is now fully healthy and he even played in 4 games for the Bulldogs last season. Through only 24 career games at Georgia, Pickens amassed 90 receptions for 1,347 receiving yards and 14 touchdowns.

There's no denying that Pickens is a special talent. He runs a 4.4 40 and is 6-3 and 200 pounds. Pickens will have to share receptions with Pittsburgh's other two big receivers in Diontae Johnson and Chase Claypool, but he should get lots of opportunities lining up as the slot receiver.

At 50 to 1 odds, we think Pickens is definitely worth a small wager. We think he'll put up some respectable numbers regardless of whether it's Mitchell Trubisky or Kenny Pickett lining up under center.

Bonus Bet for Offensive Rookie of the Year: Tyler Allgeier

There is a huge variance with this number. We highly recommend playing this at Caesars Sportsbook because their odds are double what any other sportsbook is offering. This speaks to the importance of shopping around for the best odds.

Allgeier isn't getting too much attention because he slipped all the way to the 5th round of the draft. However, things line up very nicely for the former BYU star when you check the Atlanta Falcons' depth chart. Though Cordarelle Patterson is a stud fantasy player, Allgeier is a much more gifted running back.

At 5-11 and 224 pounds, Allgeier is a big, bruising back that should be Atlanta's top choice for situations around the goal line. Allgeier proved at BYU that he can be an every-down type of back in the NFL. In 2021, he rushed for 1,601 yards and 23 touchdowns.

A lot of teams passed on Allgeier because of his 4.6 40-time at the combine. Atlanta got a gift when he fell in their lap. Give us the overly generous 100 to 1 odds on Allegeier to win the OROY!

Best Bet for Defensive Rookie of the Year: Aidan Hutchinson

We went chalk with our DROY prediction last year and it paid off, as Micah Parsons easily took home the award after a stellar first year in Big D. We'll employ that same strategy again this year with Aidan Hutchinson, who should make an immediate impact for the Detroit Lions.

"Hutch" went from virtual obscurity to racking up 14 sacks and finishing 2nd in the 2021 Heisman Trophy voting. He was a big reason why Michigan had such a great season in 2021. Hutchinson is 6-6 and 265 pounds with a freakishly fast first step.

The Lions only registered 30 sacks in 2021, which ranked 30th in the league. With Hutchinson flying off the edge, that will change this season. We expect double digits in sacks and a DROY trophy on Hutch's mantle at the end of the 2022-23 season.

Okay, 10 to 1 isn't really a long shot so we renamed this pick a "midrange bet". Stingley has all of the tools to be a Pro Bowl NFL cornerback, which is why the Texans took him with the third overall pick in the draft. This kid has the same type of covering ability as another former LSU standout, Patrick Peterson.