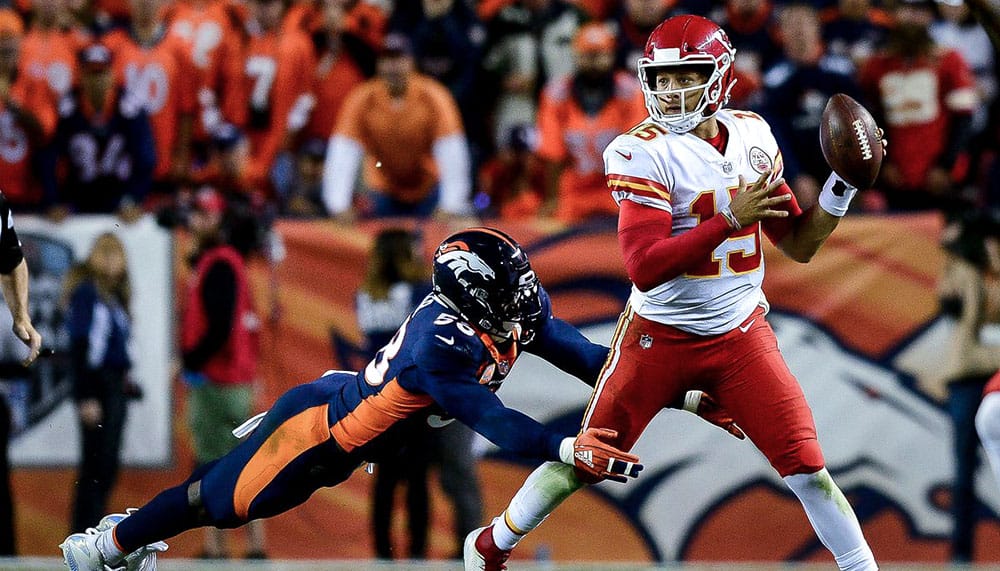 Both of our sides on the Pittsburgh Steelers and Tennessee Titans went up in smoke, while both of our Unders easily cashed. Week 13 looks like a tough card to us, especially as far as sides are concerned. This late in the season it can be tough to find value.

However, we do have a couple of totals that we absolutely love! Let’s go 2-0 this week and build some momentum!

We might as well kick the week off with an early pick on the Week 13 Thursday Night Football game! We feel there is a decent amount of value in the Over since our power ratings say this total should be 50.5. These two teams have combined for 12 Overs and only 10 Unders this season.

Despite playing with a backup QB (Trevor Siemian), 4 out of the Saints’ last 5 games have gone over the total. According to a few reports, the Saints plan on starting Taysom Hill at QB this week. Hill is a swiss army knife type of player that could give this sluggish New Orleans offense a much-needed spark.

The Saints’ offense has struggled ever since Jameis Winston tore his ACL and was lost for the season. However, we see this unit having a fair amount of success against an awful Cowboys secondary.

Dallas gives up 7.3 yards per pass, which ranks 25th in the league. That is an area that the Saints may be able to exploit if Hill can push the ball down the field.

Though New Orleans has some below-average offensive numbers, they do a great job of scoring TDs once they get inside the 20. The Saints score red-zone touchdowns at a 71.05% clip, which ranks 2nd in the league.

We aren’t at all worried about the Dallas offense, as they looked great on Turkey Day by putting up 33 points on the Las Vegas Raiders. Dak Prescott is firing on all cylinders and this offense leads the league in yards per play (6.2). This unit also ranks 9th in third-down conversions and 2nd in TDs per game.

The Cowboys’ offense will get a huge lift this week since CeeDee Lamb will be back in the lineup after clearing the concussion protocol. Lamb is the Cowboys’ best receiver so that should be a huge boost. Amari Cooper has been out with Covid-19, but he has a chance to return for this game as well.

Sure, the Saints have a stellar rush defense but they are terrible against the pass. This means Kellen Moore should be calling a pass-heavy type of game, which should help our case for the Over. The Saints rank 26th in yards per pass allowed and 23rd in passing yards allowed per game so Dallas shouldn’t have any trouble getting to at least 30 points in this one.

We see both offenses doing quite well in this game. We see the Cowboys winning this one 31-24. Let’s take the over here at 47.5.

Total of the Week: Denver / Kansas City UNDER 47.5

This is our favorite play of the week so we’re playing it for a little more than our normal bet amount. The Broncos are an Under machine this season, as 9 of their 11 games have stayed under.

We feel the oddsmakers are still putting too much stock in the Chiefs’ season-long defensive stats (which are awful). However, when you look at their current form, this Kansas City defense has been trending upward for quite a while. This unit is healthier than it has been all season.

Since their embarrassing blowout loss to the Titans, the Chiefs’ defense has been lights out. They only gave up 17 to New York, 7 to Green Bay, 14 to Las Vegas, and 9 to Dallas. The scary thing is they could be even better since they are coming off their bye week.

Denver ranks 18th in yards per play, 23rd in third-down conversions, and 26th in red-zone offense. This is an anemic, run-heavy offense that will try to win the time of possession battle to keep Mahomes and company off the field. The Broncos rank 31st in pace of play this year so that points to an Under.

The Chiefs’ potent offense does scare us a little in this spot, as Andy Reid usually has a phenomenal game plan coming out of a bye week. However, when you dig into this year’s numbers, it’s easy to see why Kansas City is more of an under team this season.

Though the Chiefs average 25.5 points per game (9th), they haven’t been nearly as sharp inside the red zone like in years past. Kansas City is only scoring red-zone TDs at a 59.52% clip. If that trend continues in this game, this should be an easy under.

It should also help our case that Denver ranks 10th in red-zone defense. The Broncos are also decent against the pass, with hotshot rookie CB Patrick Surtain leading the way. Denver only allows 6.6 yards per pass (13th) so they may be able to hold Kansas City in check, at least for most of the game.

Our numbers say this total should be around 42 or so. We’ll make Under 47.5 our Total of the Week. Best of luck with all your NFL Week 13 action!