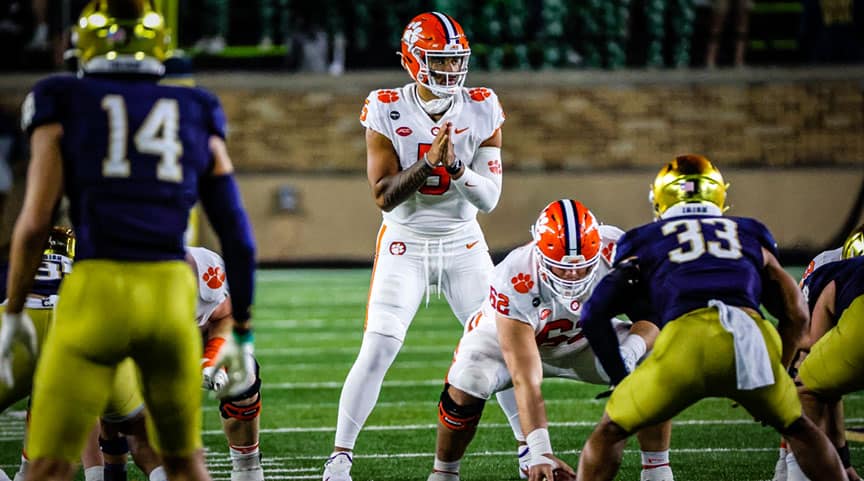 Best Bets from the College Football Week One Slate

September can’t get here fast enough for hardcore college football bettors. Most online sportsbooks have had their Game of the Year point spreads out for quite a while. Some books have even posted lines for the entire week one CFB slate.

When it comes to handicapping college football, the early bird does indeed get the worm. Our goal with this article is to give you the opportunity to capture some market value before these lines really start to move as the season edges closer.

Here are three college football best bets to consider adding to your week one card before the calendar turns to September.

There are some +3.5’s available on this one so shop around at all of your state’s sportsbooks for the best price. It’s now or never for Kirby Smart and the Georgia Bulldogs. All of those five-star recruits have to pay dividends at some point and we think this could be the year.

Georgia’s offense struggled for a few games to start the 2020 season but looked completely different once they were able to get former USC star QB JT Daniels on the field. The 6-3 210 pounder has a rocket arm and threw 10 touchdowns in only four games last season.

Though stud WR George Pickens may miss the entire season with a knee injury, the Bulldogs’ receiving corp is still loaded with talent. Guys like Kearis Jackson (36 receptions, 514 yards), Jermaine Burton, and Arik Gilbert (transfer from LSU) should fill the big void that Pickens leaves.

Clemson will have another talented defense in 2021, but we expect Georgia’s offensive line and their four returning starters to have some success in opening up some holes. In typical Georgia fashion, the running back room is loaded.

Guys like Zamir White (11 touchdowns in 2020) and James Cook (6.7 yards per carry) have the speed and power to keep Clemson DC Brent Venables awake at night. With Daniels’ arm strength at QB and two speed-demons at running back, Georgia’s offense should be able to keep the Clemson defense off balance.

The Clemson offense will definitely miss Trevor Lawrence and Travis Ettienne this year. However, Clemson knows how to reload and should continue to thrive once young sophomore QB D.J. Uiagalelei gets comfortable with the offense.

Given that this is week one, the Georgia defense may be able to give Uiagalelei some problems. Look for coach Smart to call some different blitz packages to try to get the young QB out of his comfort zone early.

Georgia should win this game outright so there’s definitely plenty of value on them as an underdog. In what should be a tightly contested game, we’ll take the Bulldogs. This will be the best game to watch in week one, Georgia 31 Clemson 27.

Best Odds for Clemson Tigers at Georgia Bulldogs - Week One

The Ragin’ Cajuns are no stranger to pulling huge road upsets against Power 5 teams. Billy Napier’s team went to Iowa State and dominated a very good Cyclones club in week one of last season.

While the Texas Longhorns made a great coaching hire in Steve Sarkisian, it will take him a little while to get this program set up the way he wants it.

ULL brings back Levi Lewis at QB for the fifth season in 2021. Lewis threw 19 touchdowns and only 7 picks in 2020 and also found the end zone five times on the ground. Lewis should have a field day against a Longhorns' defense that was terrible last season.

The Ragin’ Cajuns have a bunch of tall receivers (rare for a Group of 5 school) that will give the Texas secondary some headaches in this opening game. Kyren Lacy and Jalen Williams are both 6-3 and scored four touchdowns apiece last season. Also, ULL’s third receiver is Peter LeBlanc, who is 6-2 and caught 23 balls for 334 yards last season.

Look for Lewis to torture the Texas defense by throwing a few deep “jump balls” to these big receivers. Sark is a great offensive coach and Texas will put up their fair share of points in this one as well. Nevertheless, getting the Ragin’ Cajuns at +12 looks like good value to us.

Our power ratings say this line should only be Texas-8 so we’ll gladly jump on ULL +12 for a full unit and recommend a 0.2 unit sprinkle on the moneyline as well. This game will be a barn burner and may come down to whichever team has the football last. We can’t wait to watch this one, and projecting the Ragin' Cajuns to win outright, ULL 41 Texas 38.

The Boise State Broncos endured an uncharacteristically disappointing season in 2020 by posting a 5-2 record. New head coach Andy Avalos hopes for much better results in 2021. The Broncos’ offense should be much more consistent in the passing game this season with a good play-caller like Tim Plough coming over from UC-Davis.

Boise State QB Hank Bachmeier has a world of talent but was dogged by injuries in 2020. Bachmeier has 15 career touchdown passes and only 8 interceptions. The running game that features Andrew Van Buren (382 yards and 8 touchdowns last year) and George Holani (1,014 yards in 2019) should be a huge help to Bachmeier in 2021.

Gus Malzahn takes over at Central Florida after being fired by Auburn in 2020. The “Gus Bus” brings his creative play-calling to a Golden Knights program that typically does well on the offensive side of the ball. UCF hopes that QB Dillon Gabriel (32 touchdown passes LY) has another productive season in 2021.

Gabriel is a legitimate playmaker but the UCF offensive line was one of the worst in the country last season. The Boise State defensive line should be able to get some pressure on Gabriel and force him into some turnovers. We see a high-scoring game with the Broncos winning this one outright, Boise State 38 UCF 35.