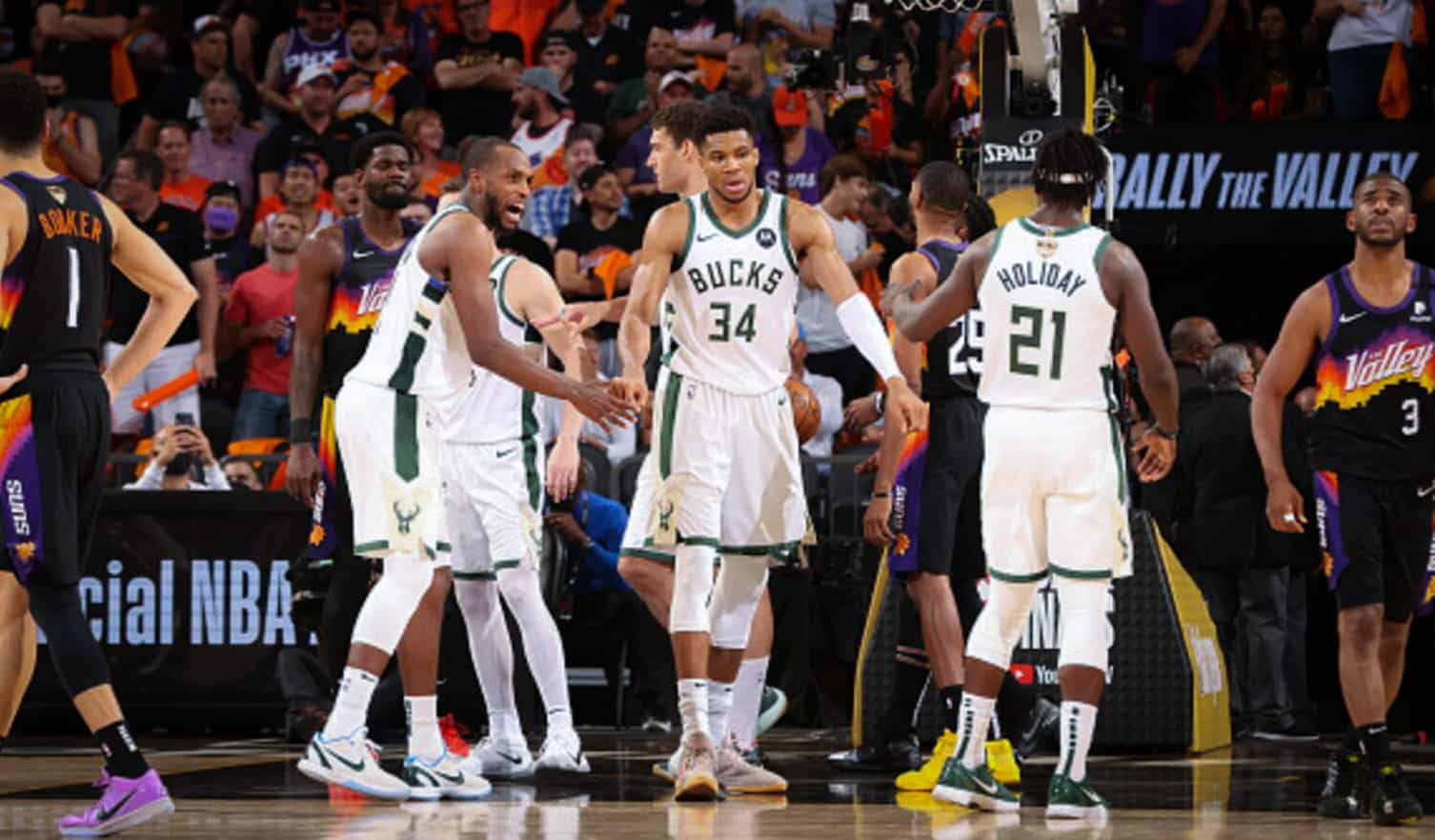 Best Bets from Game 6 of NBA Finals - Suns at Bucks

The Suns did it again. After an unbelievable meltdown in Game 4, we’ve seen an even worse choke from Phoenix in Game 5, where they gave away a 16-point first-quarter lead and made multiple mistakes throughout the last few minutes that put the Bucks in the driver seat of the series.

Tuesday’s Game 6 is in Milwaukee and the Suns would need to step up big time to put Milwaukee back on the plane and force a Game 7 in the Phoenix Suns Arena. Can they come through? Before jumping into our picks, use our live odds checker below to find the best line available on each side of the NBA Finals Game 6.

Best Odds for Every Game 6 Bet - Suns at Bucks

Suns guard Devin Booker had another amazing night on the scoring front for Phoenix and it resulted in yet another loss for his team. Booker was 17 for 33 in the game for 40 points, 4 rebounds, and 3 steals and he had scored 82 points combined in the last two games.

The Bucks are seemingly okay with the superstar guard scoring left and right and while Tucker and Holiday both do a respectable job at limiting the quality of Booker’s looks, taking his passing away is the key to Milwaukee’s success. The 24-year-old is averaging 4.6 assists throughout his career and he had only three in Game 5, and just seven in the last three games combined. The Suns simply don’t function if Chris Paul is their lone playmaker and you can see this from the low number of shots taken by Bridges (6) and Crowder (7).

As for Paul, he had a better game if you strictly look at the stats. Paul finished with 21 points, 11 assists. and 2 rebounds, but he was mostly invisible through the game and couldn’t step it up when the team really needed him. Ever since his 41-point outburst in the final game against the Clippers, Paul was just mediocre for his team and his minutes are also trending slightly down in the last few games.

We can't figure out why Suns coach Monty Williams isn't playing his top guard over forty minutes per game in this series (unless he really has an injury we don't know of). Paul has only played more than 40 minutes once through the first five games.

The Bucks made history in their Game 5 win. The trio of Giannis Antetokounmpo, Jrue Holiday, and Khris Middleton became only the 5th trio in NBA Finals history to each get to 25 points on a 50% shooting game. The last team to do this were the 1985 Lakers (with Worthy, Abdul-Jabbar, and Magic Johnson), so saying that the Milwaukee core had a good game might be an understatement.

We have to give the highest praise to Jrue Holiday though, who is the team's most important defender tasked with slowing down Chris Paul and Devin Booker. Holiday was underwhelming offensively through this series, but his shooting was great in Game 5. Holiday finished the game with 27 points and a game-high +14 in plus/minus.

He also dished out 13 assists and had 3 steals. Holiday scored more than half of his points (14) in the second quarter where he made 6 of his 7 shot attempts. He was also credited with the game-winning steal in the fourth quarter where he ripped the ball out of Devin Booker's hand just to throw up an alley-oop pass seconds later to Giannis Antetokounmpo.

We also have to give credit to the Bucks bench, especially Pat Connaughton and Bobby Portis. The two combined for 23 points on 7 for 12 shooting easily winning the bench minutes for the road team. Connaughton also hit 4 of his 6 attempts from downtown and is leading the team in three-point shooting percentage through the series.

When it comes to shooting in general, both teams have been nothing short of amazing with the Bucks finishing the game with a 65.5% effective field goal percentage, while the Suns shooting 62.6% effective. The difference between the two squads was the strong offensive rebounding percentage of Milwaukee (35.7%) and the fact that the Bucks shot 78.9% from the restricted area, which has been the key to their success in the post-season.

Game 6 should be ugly. It is do-or-die time for the Suns and you can take it for granted that Monty Williams will play his starters 40+ minutes on the road. Milwaukee will also bring the heat and knowing that strong & physical defense is the MO of this Bucks team, we are expecting a war. We’ve seen the signs of fatigue on both sides in Game 5, and the situation shouldn’t improve before Game 6.

Interestingly, Game 6 in Milwaukee has the highest total in the series yet, opening up at 222 at major books. This is largely the product of the offensive showcase in Game 5, where both teams shot above 70% in the paint and above 50% from three. Series that go deeper in the playoffs tend to be more lower-scoring with the teams adjusting on the defensive end more efficiently, this is especially true to elimination games.

Our Favorite Bets for Game 6

Clearly, the Bucks deserve to be the favorite at home, but if Chris Paul is Chris Paul they likely close this series out in game 5. If we have to take a side in this one, we are taking the +175 number on the Suns moneyline and banking on Paul showing up tonight.

The real number to look at in this one is the under. Both teams are due to a lot of regression on the offensive end (especially from three-point range), and the high stakes could also make the less experienced players miss slightly more. We are picking the game to stay under the total of 222. Good luck!