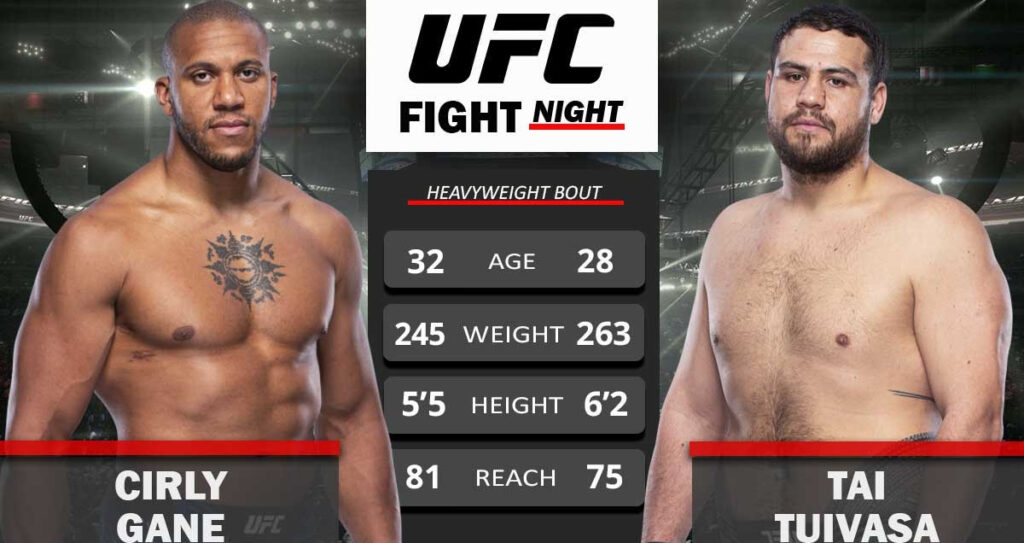 Check out our best bets for UFC Fight Night between Cirly Gane and Tai Tuivasa on Saturday, September 3.

UFC 278 was exciting in more ways than one. We got Tybura and Romanov to go the distance and cash our +120 ticket. Tyson Pedro and Paulo Costa did their job and Usman was just minutes away from scoring us a parlay win as he was easily up 3-1 through 4 rounds.

Unfortunately for us Usman backers, but incredible for the fight scene, Leon set up Usman with a nice right-hand feint followed by an explosive left foot strike to the side of the champion’s head that ended the fight.

Our underdog play missed with Jose Aldo seemingly sleepwalking through the fight. He was never really hurt but could not match the volume by Merab. We move on from last week’s PPV and focus on this weekend’s fight night card.

Parlay of the Night: Ciryl Gane & Vettori/Whittaker Go The Distance

We love what Tai Tuivasa brings to the table in regard to showmanship and excitement. He also has incredible power that he has shown off in his last 5 fights, which have all ended via KO previous to the start of the 3rd round.

However, Gane is a different animal. He has the power to match Tai but athletically he is leaps and bounds ahead of him. Unless he tries to just stand and throw haymakers with him, Gane holds the advantage everywhere.

Both Vettori and Whittaker have had a knack for going the distance and that is likely what the outcome of their bout will be. Both have good chins and avoid the big shots as well as anyone in their division.

Vettori will likely try to get this one to the ground and use his wider frame to control Whittaker but he will have a tough time accomplishing that. We wanted to play Vettori as a decent dog but this one going the distance seems much safer.

Underdog of the Night: Nasrat Haqparast To Win By KO/TKO/DQ

Nasrat is on a 2-fight losing streak and is going to be looking to make a statement here. He holds a 4-inch reach advantage and is 10 years younger than Makdessi.

We expect Nasrat to get the job done here as both are willing to stand and strike. This one shouldn’t get to the ground but if it does, Nasrat will be the one to take advantage being the spryer of the two.

We were not impressed with the way Nathan Wood fought in his last matchup against Charles Rosa. He had a chance early to finish it but was not able to and luckily got to the decision where he was victorious.

Jourdain has yet to lose 2 in a row in his career and we don’t see that changing here. He lost his last fight by majority decision to Shane Burgos so we see him bouncing back nicely in this one.