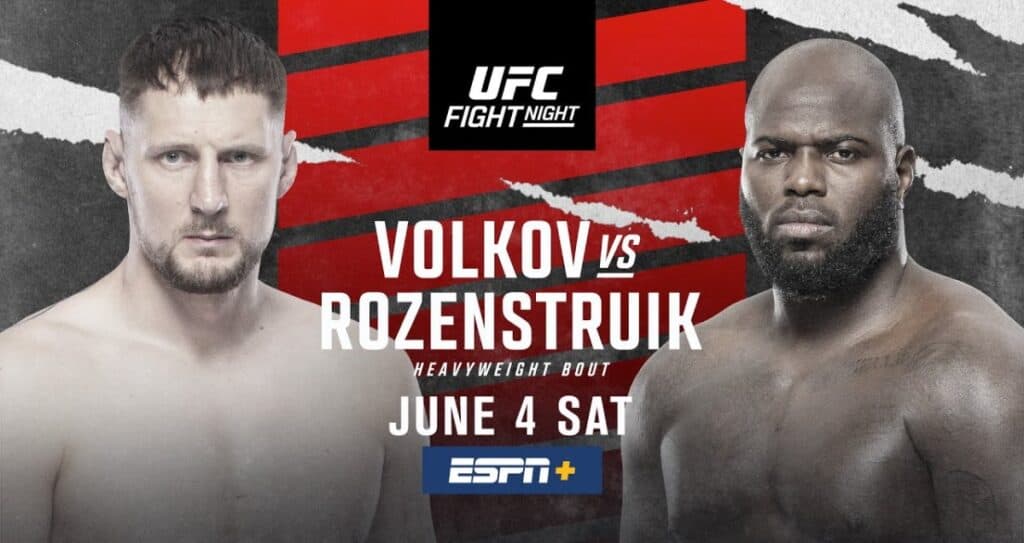 Volkov vs Rozenstruik to go the distance is one of our best bets for UFC Fight Night.
By Bill Christy on June 3, 2022

We have had a bit of time away from the octagon lately. There has been some big news in terms of upcoming fights that are extremely intriguing to me.

Paddy Pimblett against Jordan Leavitt is one that terrifies me as a big Paddy backer. I think Jordan could surprise a lot of people, including Paddy himself. That same night, his fellow countryman, Tom Aspinall will face Curtis Blaydes in the biggest test of his career.

I have seen Aspinall come out as a dog in some shops and love the value there. I believe his grappling is at a higher level than people want to believe and think he can get the job done.

All that said, let’s take a look at the fights we have this weekend. We have a Russian welterweight making his UFC debut in Rinat Fakhretdinov, a big bounce-back fight opportunity for the genetic freak Alonzo Menifield, and a desperate Dan Ige facing a monumental test in Movsar Evloev. Here is what we are looking to cash in on during UFC Fight Night.

The aforementioned UFC debut of Rinat and the genetic freak (Menifield) are making up our parlay of the night for this fight night. Rinat has not lost since his 2nd fight of his career (2013). He is 18-1 in his professional career and has finished 8 of his last 9 opponents.

His opponent, Andreas Michailidis, has lost 2 of his last 3 fights by KO/TKO. Rinat’s power should be too much for Michailidis and he should get the finish again here in his debut.

Alonzo Menifield is coming off a tough loss via decision to William Knight back in December. He is getting Askar Mozharov who is just 19-12 in his career and is making his UFC debut. Askar is very susceptible to getting submitted as he has 8 of his 12 losses coming that way, but Menifield is far from a submission expert.

However, he does have 2 wins via submission with the latest coming just 3 fights ago. Either way, we like Menifield to get the job done; one way or the other.

Underdog of the Night: Johnny Munoz

Munoz is just 1-1 in the UFC but 11-1 in his entire professional career. Those 11 wins include 7 via submission. He gets Tony Gravely in this matchup who likes to take the fight to the ground but also has 5 of his 7 losses coming via submission.

I believe Munoz will find a way to come out victorious here and if I had to make a method of victory selection, it would obviously be by submission (+250 DraftKings).

Both of these guys have true KO power. However, they both also have strong jaws and have been KO’d a combined 3 times in a total of 59 fights.

I could see each of these guys gassing themselves early trying to end it by KO and we see a lot of grappling as the fight goes on. If we get a KO win, it should be an exciting one. However, if it underwhelms like we believe this has the chance to do, we will cash the GTD play here.