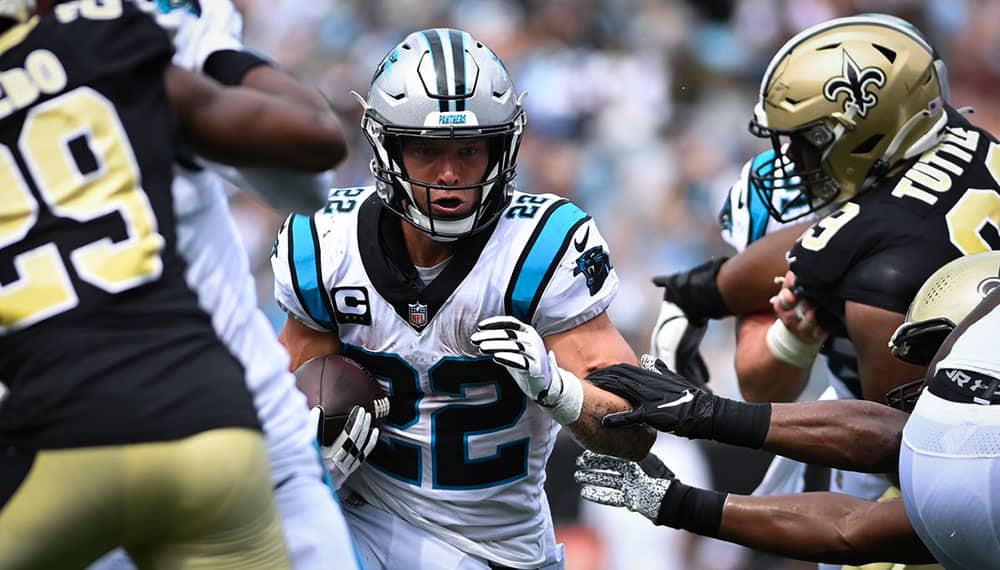 While this is far from a marquee matchup, bettors will be paying close attention to how each of these teams performs on Thursday night. Both the Panthers and Texans have easily covered their respective spreads through two weeks, and now we get the added curveball of trying to figure out what this Texans offense will look like with rookie Davis Mills under center.

With Tyrod under center, the Texans have had the league's 10th highest-scoring offense. However, Mills struggled after replacing Taylor, completing just 8 of 18 passes for 102 yards, a touchdown, and an interception. Things won't get easier for Mills this week as Carolina has the NFL's top-scoring defense through two weeks.

Current Spread and Best Available Odds for Every Bet

This is one of the NFL Week 3 matchups we were most looking forward to seeing the opening odds on. Both teams are not only 2-0 ATS this season but have covered the spread by over 11.5 points per game. Prior to the Tyrod Taylor injury, the Panthers were 4 point favorites and currently sit at 8 point favorites.

We were David Culley believers this offseason and think the Texans' surprise start to the 2021 season has more to do with his abilities as a coach than Taylor's performance through two weeks, but don't believe he can coach up Davis Mills to keep up the hot start on the offensive side of the ball.

While the spread has doubled, the total has been relatively steady here. The sportsbooks that dropped it from 44 to 43 are now back to 44, indicating there is a decent number of over tickets out there already. Here are the best odds and lowest juice available for every wager for this matchup:

Injuries Pile Up for the Feisty Texans

The 1-1 Texans are in a tough spot heading into their Week 3 matchup against the 2-0 Panthers. Houston didn’t just lose two of their best receivers in Danny Amendola and Nico Collins to injuries on Sunday, but QB Tyrod Taylor also left the game with a hamstring injury. Taylor is already scratched from Thursday’s contest resulting in Davis Mills making his first career starts.

Mills is a third-round rookie out of Stanford and while scouts are praising his arm strength, quick release, and accuracy, he was criticized due to his questionable decision-making and the overall lack of athleticism & mobility.

Mills averaged 5 yards per passing play in his Week 2 outing and only had a 47% adjusted completion rate. He seems like the exact opposite of Taylor, who averaged 10.8 yards per passing play and a 91% completion rate, although with a much lower average depth of target. Heading into Week 3, we can expect more deep passes but a much lower success rate from this Texans offense with Mills at the helm.

The Houston passing attack will be all about Brandin Cooks going forward. Besides the 27-year-old no other receiver had more than two targets and with the injuries to the receiving core, we could see some non-NFL level players hitting the turf. The Texans’ run game seems healthy with all of David Johnson, Mark Ingram, Philip Lindsay, and Rex Burkhead getting 10+ snaps, but Carolina has allowed an NFL-low 2.7 yards per carry so far in two weeks, so we would not have high expectations towards Houston putting up points in this game.

Two weeks in this new-look Panthers team looks pretty promising. The only area where Carolina struggled so far has been stopping top-end receivers. Carolina has allowed 11.9 yards per reception giving up a bunch of big-time plays, but facing a Houston team with one legit threat in the passing game in Cooks should help the Panthers to improve upon those numbers.

Offensively, the Panthers have been rolling. So far through the season, Carolina has improved upon all of its stats from 2020 when it comes to the passing game. Through two weeks Sam Darnold has a 69% pass completion rate with an average depth of target of 8 yards. The Panthers receivers are averaging 11.7 yards per reception teaching first downs on a whopping 64% of receptions (up from 52% in 2020). The run game took a bit of a backseat with the Panthers leaning more on the passing game, but you should never overlook a backfield that features Christian McCaffrey.

While Sam Darnold won’t wow you with his skills, he has developed into a pretty dependable passer that can work efficiently in a scheme that favors short passes. With the number of high-quality skill players that Carolina has at their disposal, you really don’t need too much from your QB besides not turning the ball over.

The WR duo of D.J. Moore and Robby Anderson will be solid headliners of the receiving core this year and while Moore is clearly the #1 option here, Darnold will have so many more weapons besides these two with both Terrace Marshall Jr. and Brandon Zylstra flashing their upsides early in the season.

We are taking the Panthers here and laying the points! The downgrade from Taylor to Mills is worth at least two points and the lack of weapons in the Houston passing game is very concerning. The Texans’ defense is struggling mightily against an efficient passing game and Carolina has all the tools to come away with a victory and a cover here.