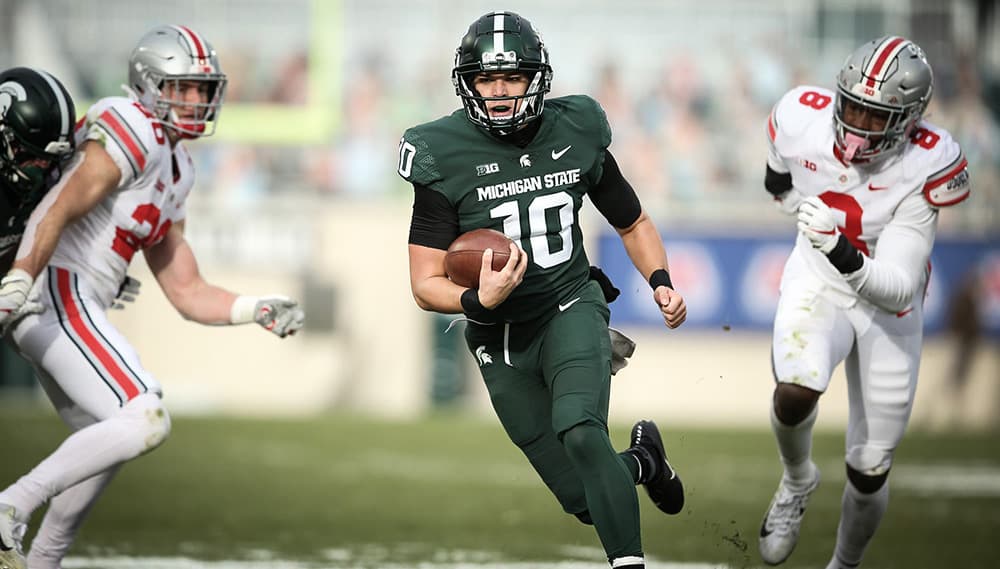 The Overs were not kind to us in Week 11 as both the Texas A&M / Ole Miss and Oklahoma / Baylor games stayed under their respective totals. Our only win was on Minnesota +5.5 as the Gophers just barely covered the number in a five-point loss to Iowa.

That brings our college football record to 19-17 on the year. There’s only a couple of weeks left in the regular season so we need to make some hay while the sun is still shining. Here are two Best Bets we feel good about for Week 12.

Top Total for Week 12: Michigan State at Ohio State Over 67.5

We’ll go back to the Over well this week with this Big 10 battle between the Spartans and Buckeyes! Both of these teams have a ton of talent at the skill positions so there should be plenty of long touchdowns in this game. Here are four reasons why we love the Over.

Both of these teams can put up points in a hurry. Both teams have very good quarterbacks. Each offense can put up 40 points on any given Saturday.

The Spartans’ offense has been one of the most shocking surprises in college football this season. Payton Thorne has quietly morphed into one of the best QBs in the Big 10 by throwing for 2,460 yards and 21 TDs. Thorne could have a productive day against a Buckeyes secondary that is surrendering 261.5 passing yards per game.

The Buckeyes’ offense is one of the most dominant units in the nation. Ohio State leads the country in yards per play and yards per rush. They also average over 46 points per game so Sparty may have a tough time slowing them down.

C.J. Stroud has racked up 3,036 passing yards and 30 TDs, and he has a shot at taking home the Heisman. Stroud has an embarrassment of riches to throw to with Chris Olave, Garrett Wilson, and Jaxon Smith-Njigba forming the best wideout trio in the land. This offense could terrorize a Spartans defense that ranks 130th in passing yards allowed per game.

Though both of these defenses are tough against the run, they both struggle to get off the field on third down. The Buckeyes’ defense ranks 92nd in red-zone conversion percentage while the Spartans rank 70th in that same category.

This one stat alone shows that both offenses could dominate this game. We don’t see either defense getting too many stops.

Here’s another stat that should work in our favor for the Over. Neither of these teams lights the world on fire in terms of red-zone defense. This should lead to lots of touchdowns and not too many field goal attempts.

Both of these offenses are in outstanding current form. Michigan State put up 40 points last week against Maryland while Ohio State hung 59 on a pretty decent Purdue team. The Spartans’ last three games have sailed Over the posted total. Let’s take the Over and cheer for points!

Bettors looking to get in on the over in this matchup can still find a 67.5 number at TwinSpires Sportsbook. The majority of the US betting market has moved the total for this game to 68.5. Below is a live look at the best odds for every available bet in this matchup.

We love the job that Sam Pittman has done with the Arkansas Razorbacks program. He’s brought this team a long way in a short time. As much as we admire Pittman’s coaching ability, this is a terrible matchup for the Hogs. Here’s why we are so high on the Tide this week.

The spot favors Alabama in a big way for this game. Arkansas is coming off two nail-biter wins over LSU and Mississippi State. This will be the Razorbacks’ second road game in a row.

Meanwhile, this will be Alabama’s fourth straight home game. The Crimson Tide had a walk-through last week in a 59-3 rout over New Mexico State. Alabama’s players should be somewhat rested while Arkansas’s players could be a bit worn down.

Though the Alabama defense was gashed by Florida earlier in the year, they’ve been stout against the run ever since that embarrassing performance. That may have been the wake-up call this group needed.

This unit ranks 5th in the nation in yards per rush allowed and 3rd in rushing yards allowed per game. The Hogs do their best work on the ground, but they could be in for a long day in that regard.

Another defensive edge Bama has in this game is their pass rush. The Tide does a splendid job of pressuring the QB, as they register a sack 9.66% of the time, which ranks 10th in the land.

The Hogs may have a tough time blocking defensive end Will Anderson, who leads the nation with 12 sacks. Arkansas has a tough time generating much of a pass rush, as they rank 86th in sack percentage.

Here’s where the Tide has the biggest edge. Bryce Young has been lighting up the skies all season long with 3,025 passing yards and 33 TDs. Because of Young’s composure, Bama leads the country in third-down conversion rate.

We never like giving up almost 3 TDs but we’ll make an exception this week. Arkansas is an above-average football team but they’re not quite on Alabama’s level yet. Remember how Georgia shut out Arkansas 37-0 back in early October?

This Alabama team is every bit as good as Georgia so we see a similar result in this game. We won’t call for a shut-out but think Bama wins 42-14.

Bettors looking for the -20.5 Alabama spread can still find it at -110 at BetMGM Sportsbook. Find the best available odds for this SEC matchup below.