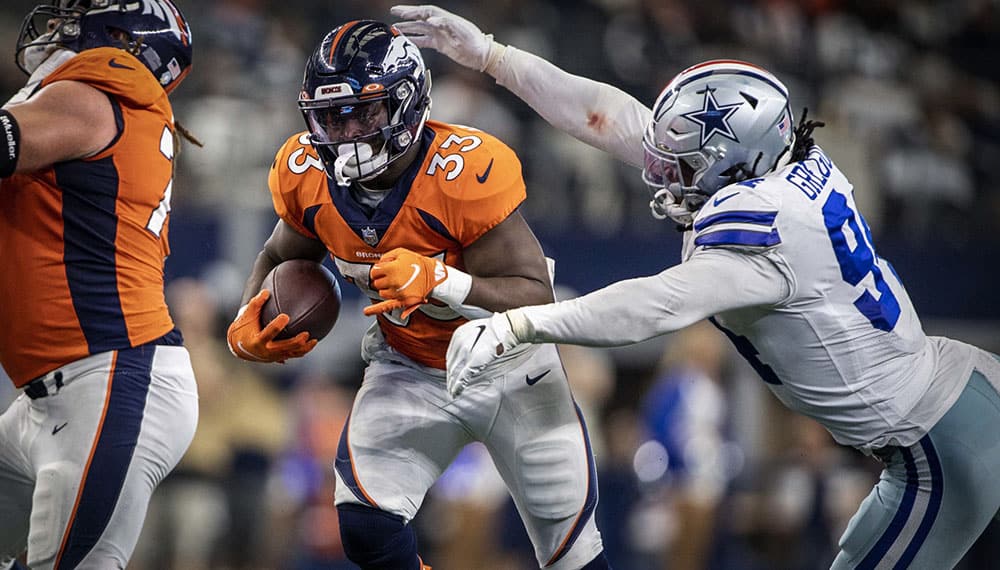 Best Bets for the NFL Week 14 Slate of Games

We went 1-1 with our NFL Best Bets last week. Thankfully, our Total of the Week on the Broncos / Chiefs Under cashed easily so we cleared a small amount of profit.

With NFL sides seemingly getting tighter each week, we are shifting to more of a totals approach. Here are three unders that we think have lots of value in Week 14.

Total of the Week: Detroit at Denver UNDER 42

Might as well ride this Broncos Under train until it stops. Like we talked about last week, Denver loves to play a slow, methodical type of offense. That’s the main reason that 10 of the Broncos’ 12 games have stayed under the posted total.

Though the Detroit Lions were involved in a shootout while getting their first win last week, they are still very much an under team. 8 out of Detroit’s 12 games have stayed under the total this season.

Neither team loves to run an up-tempo style of offense. Denver ranks 31st in pace while Detroit ranks 18th. Pace is a critical statistical category to dig into when betting totals and it works in our favor with this under.

The Broncos have played six straight games under the total and all but one of those games were of the stress-free variety. The Lions have especially been an under team on the road, as 5 out of their 6 road games have stayed under.

Another reason to love the under is that both teams are awful at converting third downs. Detroit is dead last in the league in that crucial category, as they only convert 31.54% of their third downs. Denver has a conversion rate of only 36.84% which ranks 24th.

Both teams also struggle to score touchdowns once they get inside the red zone. The Lions only score a TD on half of their trips inside the 20-yard line (29th). The Broncos aren’t much better, as they only score red zone touchdowns at a 52.5% clip (27th).

Our math formula says this total should be lined at 37 points so we’ll gladly take the Under 42 as our Total of the Week.

Seattle Seahawks at Houston Texans UNDER 42

My goodness, how bad is this Houston Texans offense? They were shut out by the Colts last week and only scored 14 against the hapless Jets the week before that. The news only gets worse for this team, as QB Tyrod Taylor has an injured wrist and is listed as questionable for this game.

The Seahawks’ offense showed signs of life during their nice upset win over the 49ers last week. However, we still don’t think this unit is very good as a whole.

The Seahawks have especially been an under team on the road this season. 5 out of Seattle’s 6 road games have been unders. The one game that didn’t stay under resulted in a push.

Neither of these teams likes to run a fast-paced offense, which also helps our case for the under. In terms of pace, Seattle ranks 19th and Houston ranks 21st. When looking at trending pace, the teams are even slower (Seattle 22nd, Houston 23rd).

Digging into the metrics further, we see that Seattle doesn’t have the dominant offense that they used to have. This unit ranks 24th in rushing yards per game and 27th in passing yards per game. Russell Wilson is still a dynamic player, but he’s playing behind a bad offensive line that isn’t giving him enough time to throw.

Houston’s offense ranks dead last in a whole slew of categories including points per game, yards per play, yards per pass, and TDs per game. The Texans shouldn’t have much success on the ground, as the Seahawks only allow 3.9 yards per rush (3rd). Seattle does have a suspect secondary but we don’t think rookie Davis Mills can burn them too often.

Pittsburgh Steelers at Minnesota Vikings OVER 44

We got burned on our Thursday Night Over pick last week. Maybe we are gluttons for punishment, but we like this primetime game to go over this relatively low total.

The Vikings have been an over team this season, as 7 of their 12 games have gone over the total. 4 out of Minnesota’s last 5 games have easily sailed over the total. Even with Adam Thielen and Dalvin Cook out with injuries, we still see this offense putting up plenty of points.

The Steelers have been an under team this season, as 7 out of their 12 games have stayed under. However, 3 out of Pittsburgh’s last 5 games have gone over by a pretty wide margin.

Ben Roethlisberger is listed as questionable with a sore shoulder and pectoral muscle. While this is a definite concern, Big Ben is a gamer and we expect him to play. Even if Roethlisberger can’t go, Mason Rudolph knows the offense well enough to put up some points.

Despite a disappointing 5-7 record, Minnesota has played some pretty good offense this season. The Vikings have a fairly explosive passing game, as they rank 8th in yards per pass and 7th in yards per play. It hurts that Thielen is out with an injury, but we expect Kirk Cousins to hook up with Justin Jefferson on several deep passing plays.

We see the Vikings winning this game 27-24 so take the Over! Best of luck with all your NFL Week 14 action! Let’s cash some tickets!