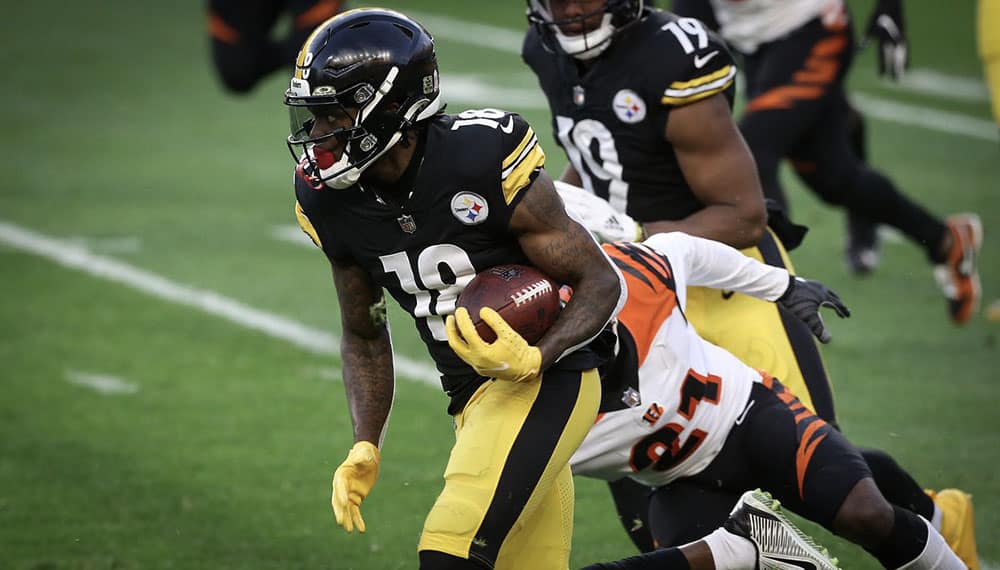 Our NFL Best Bets for Week 11 had a tough week with a 1-2 record. The Tennessee Titans ended up losing to the lowly Houston Texans outright as 10-point favorites. Our Under pick in the Green Bay / Minnesota game went down in flames as well.

Our only winner was on the Arizona / Seattle Under, which was a nice, comfortable victory for us. Let’s get to our NFL Best Bets for this Sunday’s slate of games. For our Best Bets on Thanksgiving Day, be sure to check out our previous article.

Here is a line that doesn’t make a lick of sense. This is a division rivalry and these two teams are so similar that neither one should be more than a field goal favorite. Our power ratings make this line Cincy -1 so we’ll gladly take the points with the Steelers.

Let’s not forget that the Bengals embarrassed the Steelers by 14 points back in Week 3 on their home turf. Pittsburgh would love nothing more than to return the favor on Cincy’s home turf. Mike Tomlin is a heck of a motivator and you can bet he’ll have the boys in black focused and fired up for this nice revenge spot.

There’s not a whole lot to like about the Steelers’ offense in this game but they do have a slight advantage on third down. Pittsburgh converts 41.55% of their third downs, which is ranked 13th in the league. Cincinnati ranks 16th in that category.

Though Cincy has the edge in yards per play on defense, Pittsburgh has the advantage in a couple of key defensive categories. The Steelers rank 7th in third-down defense while the Bengals rank 13th. If those numbers hold, Pittsburgh may be able to force Cincy to punt a few more times than they’d like.

The Steelers defense also knows how to clamp down inside the 20-yard line. Pittsburgh ranks 4th in red zone defense, as they only allow a TD 48.48% of the time. The Bengals defense ranks 11th in that area.

We think the Steelers get their revenge in this one and win the game outright! Take the generous 4.5 points but don’t be afraid to sprinkle a little something on the moneyline.

Call us gluttons for punishment if you must but we’re going back to the well with the Tennessee Titans. The Titans sucked last week and it was because they were already looking ahead to this road trip to Foxboro. We all know that Mike Vrabel wants to stick it to his old coach Bill Belichick.

The Pats are playing some tremendous football right now but this line is just way too high. Our number said this line should be NE -3 so we see plenty of value to fire away on the Titans in this one.

New England has played a cupcake schedule, as their strength of schedule is ranked 31st in the league. The Titans, on the other hand, have played the 18th toughest schedule. That’s a pretty significant difference.

Tennessee misses Derrick Henry but this offense still has enough weapons to give Belichick’s defense some headaches. The Titans rank 10th in red-zone offense while New England only ranks 18th. A.J. Brown is dealing with a chest injury but hopefully, he’ll be ready to play by the time game day rolls around.

The Patriots’ defense has been playing lights out of late but don’t disrespect this Titans defense either. Both teams only allow 4.1 yards per rush. The Titans allow 97.2 yards rushing per game (4th). The Pats allow 101.7 rushing yards per game (8th).

New England does have the edge at kicker and in turnover margin so that’s something that could hurt Tennessee’s chances. In the end, we think the Pats win but the Titans cover the lofty spread.

How about a little action on Sunday Night Football? We love the Under in this spot for a variety of reasons. Our math formula makes this total at 42 so we see enough value to pull the trigger.

Lamar Jackson missed last week’s game against Chicago due to an illness. Though all reports say that Jackson is feeling better, we have to think that he may be a tad bit rusty for this game against the Browns. That could lead to a pedestrian game from the Ravens’ offense.

Our main reason for loving this Under comes down to the pace of play. Both of these teams love to run a methodical, slow-paced offense.

Baltimore ranks 28th in pace of play while Cleveland ranks 30th. This tells us that both teams could have a couple of long but slow drives that take lots of time off the clock.

Both defenses are pretty good at stopping the run. The Ravens rank 6th in yards per rush allowed while the Browns rank a respectable 12th in that same stat.

We see this being a defensive struggle, with neither team scoring more than 21 points in this one. We predict a 21-17 final so take the Under! Happy Thanksgiving and best of luck with all your action this week!

Georgia is on the brink of joining the numerous states that have already legalized sports betting. A group of senators has introduced Senate Bill 57, which, if passed, would allow up to 18 online and retail sports betting licenses, creating a new source of revenue for the state. Nonetheless, gaining approval for gambling could still […]

Read More
Could Sports Betting Become a Reality in Texas?

Rep. Charlie Geren (R-Fort Worth) filed HJR 97 on February 3, which proposed a constitutional amendment that, if approved by Texas voters, would legalize sports betting and authorize the construction of seven commercial casinos in metropolitan regions across the state. Filing his legislation on Friday, Rep. Geren joins forces with Sen. Carol Alvarado of Houston, […]

We bounced back nicely with a 2-1 performance last night to cash our Flex Play. Our friends on the Phoenix Suns were good to us, as both Chris Paul and Deandre Ayton easily cashed our Over tickets on their assists and rebounds, respectively. The only thing keeping us from the perfect 3-0 sweep was D'Angelo […]

We took a step back with our NBA props last night with a 1-2 mark. Donovan Mitchell led the Cavs to a victory over the Wizards but he still didn't go over his point total. Alperen Sengun also burned us by dishing out more assists than we anticipated. Our sole winner was on Zach LaVine, […]