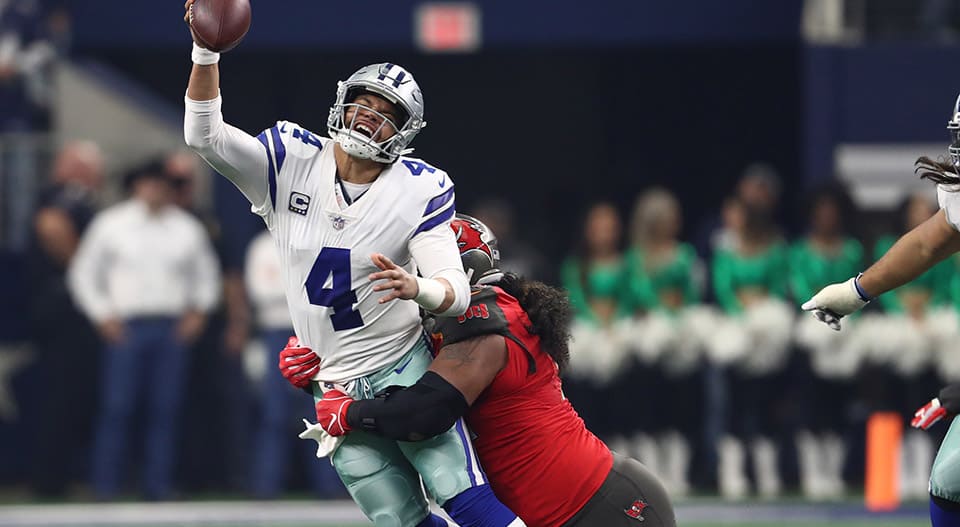 Best Bets for the Cowboys at Buccaneers NFL Opener

Football is back and that means another season of Tom Brady! The GOAT will be starting his 21st season gunning for multiple NFL records including the career record for passing yards (needs 1155), completions (needs 364), and he can also become the first QB to win multiple games after his 44th birthday.

The season opener against the Dallas Cowboys will mark Brady’s 300th career start and we would expect him to bring his A-game. Let’s dive in!

PointsBet has a great offer available for the 2021 NFL season opener between the Bucs and Cowboys. Place any $10 wager and, win or lose, get $125 in free bets! Here is how to lock in this offer:

Current Line and Best Available Odds for Cowboys at Buccaneers

The defending champion will play their first game at home in Raymond James Stadium where they are currently laying 6.5 to 7 points, depending on the sportsbook you are using. Early sharp money has been coming in on Brady & Co. and even those books that opened the spreads at 6.5 are forced to move to 7.

We would not be surprised to see this spread move to 7.5 before kickoff. Remember to use our NFL odds tool to shop live odds on all of your week one bets. Here is a live look at the best odds available on each side and the total for this game:

How Will the Bucs Look in Week 1?

Brady will have his full set of weapons available from the season opener headlined by the WR trio of Mike Evans, Chris Godwin, and Antonio Brown. Tight end Rob Gronkowski also decided to return to the Bucco's on a one-year contract and fellow-tight end O.J. Howard has impressed in camp as he works his way back from an achilles injury.

This Tampa Bay team was an offensive juggernaut last year and we would expect more of the same from them this season. Tampa Bay finished the 2020 season as the 3rd highest rated team by offensive DVOA, only trailing Green Bay and Kansas City. If there is one area where Tampa Bay can improve it is their (pass) defense. The team has only finished 29th in defensive DVOA, as the Buccaneers have often got stuck in high-scoring games where they gave up tons of points.

The run defense was solid in 2020, allowing only 3.6 yards per carry (the least in the NFL), but the Buc’s defense against the pass was mediocre at best. Tampa Bay allowed the fourth-highest completion rate, only the Texans, the Jaguars, and the Jets allowed a higher percentage of successful passes.

What to Expect from the Cowboys in Week 1

The season opener looks like a solid matchup for the Buccaneers with the Dallas Cowboys only averaging 7.1 passing yards per attempt in 2020, which is easily in the bottom half of the league. Obviously, we have to note that the Cowboys’ offense was mostly run by backup QBs last year, so it is fair to expect some improvement if Prescott can indeed return from his injuries, but it could take time before things start to click again.

The Cowboys do have name value and many analysts are reasonably high on the trio of Amari Cooper - CeeDee Lamb and Michael Gallup, which should be a top-five unit in the league when healthy. The running back corps for the Cowboys is - of course – once again headlined by Ezekiel Elliott, but coach Mike McCarthy reportedly plants to deploy Tony Pollard and Rico Dowdle as well, so the team won't need Zeke to run the ball 25-30 times a game. Health has been a big issue for Elliot and even with the reduced workload, it is by no means guaranteed that he can get through the season unscathed.

QB Dak Prescott’s status is also a huge question mark before week one. Prescott only played 5 games in 2020 and is currently nursing a shoulder injury. Recovery is going well according to the reports and Prescott will likely be available for Week 1, but it is unclear if he will be able to play in any of the preseason games or not.

The real difference when comparing these two teams is on the defensive side of the ball. The Bucs are absolutely loaded defensively, with arguably the best run defense and pass rush in the league. On the Cowboys side, this defense is still one of the worst in the league on paper, and will be playing their first game in Dan Quinn's system.

In the 2021 NFL season opener, we are taking the Tampa Bay Buccaneers against the spread laying the points. Our model makes the spread 9.28 points between the two teams, so we will have no problem laying the seven points at home with a Tampa Bay team that looks ready to go on another deep playoff run.

Dallas already has too many health issues, too many question marks on defense, and the Bucs return absolutely loaded on both sides of the ball. We don’t think the road team will be ready to show up in Week 1.