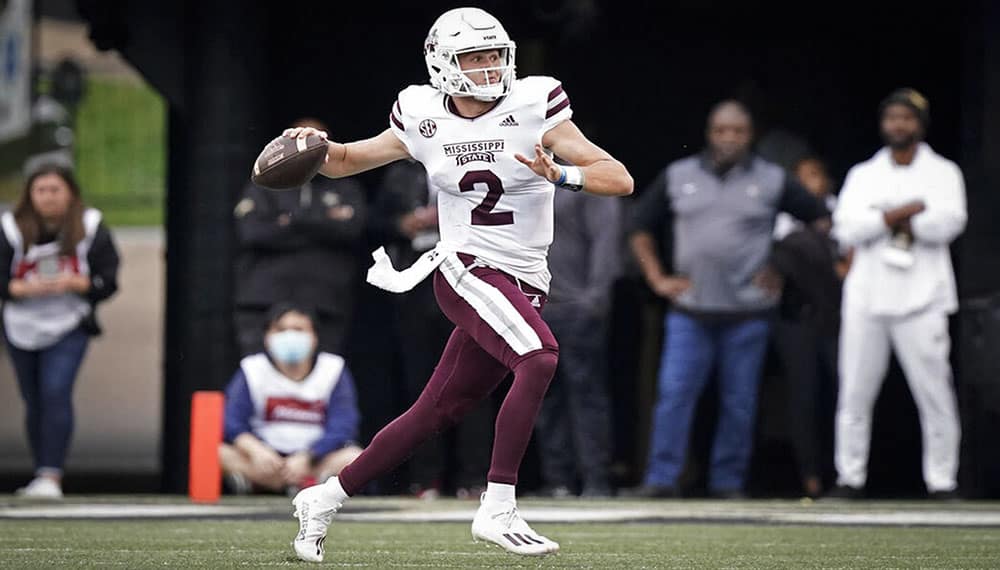 Welcome to College Football’s Rivalry Week, the most anticipated weekend of the year for hardcore fans. Our CFB Best Bets went 0-2 last week and it was painful. We’re still reeling from that Ohio State / Michigan State Over 67.5 that didn’t cash, even though there were 49 points at halftime! (OUCH)

That bad week brings us to an even 19-19 on the year. Let’s try to sweep the board this week to get back over the .500 mark. We feel really good about all three of these games!

This is one of the most intense rivalries in all of college football. This game may not get the hype of Alabama / Auburn or Ohio State / Michigan but these Mississippi kids hate each other! We love the Bulldogs in this spot.

We rarely go against our power ratings but feel this is a good time to do it for this game. While Ole Miss is the better team on paper, they’ve got a ton of distractions working against them. Rumors are flying around that Lane Kiffin may get a new job at either LSU, Miami, or Florida.

That’s the last type of distraction the Rebels need this week while preparing for the Egg Bowl. Another unwanted distraction came a few days ago when QB Matt Corral announced he was leaving to enter the NFL Draft after this season. Why the heck couldn’t he wait one more week to drop that bombshell news?

The books seem to be begging for Ole Miss money in this game. Why is the #12 ranked team an underdog to the #25 ranked team? Remember, if it looks too good to be true, it probably is.

Mississippi State will be much more focused than Ole Miss for this game. The Bulldogs will be out for blood after losing last year’s matchup by seven points so we have the nice revenge factor on our side. Will Rogers may not get the extreme hype that Corral does, but he’s become a solid QB this season.

Rogers ranks 6th in the nation with 34 TD passes. His 4,113 passing yards rank 2nd in college football. We think that Rogers will be able to find wideout Makai Polk on several deep play-action passes. Polk is an elite playmaker who leads the team with 891 receiving yards and 9 TDs.

The Ole Miss defense is better than last year but they are still far from being an elite unit. They rank 61st in yards per play allowed and 58th in yards per pass allowed. Bulldogs head coach Mike Leach should find plenty of ways to exploit the Rebels’ defensive weaknesses.

The Bulldogs defense is suspect against this pass but they are phenomenal at stopping the run. This means that they should be able to make Ole Miss one-dimensional in this game. Mississippi State ranks 8th in rushing yards allowed per game.

This is always a wild and wacky game and this year will be no different. We’ll take the more focused team with fewer distractions. We’re playing the Bulldogs on the money line.

Here’s another point spread that flat-out stinks! Why are the #19 ranked San Diego State Aztecs an underdog at home to a mediocre Boise State team that is 7-4? This is another line that looks too good to be true!

The Aztecs are a nice story but they have played absolutely nobody! Their strength of schedule is 105th while Boise State’s is 62nd. There’s a ton of value on the Broncos, as our power ratings make them a 6.5 point favorite in this matchup, even on the road.

When you dig into the metrics, you’ll see that Boise State has the much better offense in this game. The Broncos rank 25th in third-down offense while the Aztecs rank a pitiful 117th in that key category. Boise State is also slightly better in both red-zone offense and red-zone defense.

This is our favorite play this week and we are playing it for a tad bit more than our normal wager. Lay the points with confidence in this one!

The Spartans have had a nice season but they are coming off a dream-crushing loss to Ohio State last week. Wow, what a royal beatdown that was! Our theme for this week is point spreads that don’t make sense!

Why is the #7 team in the nation an underdog to a 7-4 Penn State team? It’s because Penn State is the better football team, despite their lackluster record. Our power ratings make Penn State a 4.5 point favorite in this game so there’s plenty of value to be had.

The Nittany Lions’ offense has been a major disappointment this season but they still have plenty of playmakers. QB Sean Clifford has battled some injuries along the way, but he’s still thrown for 2,599 yards and 17 TDs this season. If Clifford can hook up a few times with wideout Jahan Dotson (1,045 yards / 10 TDs), it could be a long afternoon for this suspect Spartans secondary.

We love this Penn State defense and feel they are one of the most underrated units in the country. The Nittany Lions rank 7th in yards per play allowed, 2nd in red zone defense, and 5th in yards per pass allowed. Penn State also has the edge in turnover margin and penalties yards per game.

We see Penn State pulling this one out by at least a touchdown. Take the Nittany Lions! Best of luck with all your college football action!

Read More
Is 2023 the Year for New York to Legalize Online Casinos?

The State of New York has debated the legalization of casinos for many years. Some believe that it could provide a much-needed boost to the economy, while others are concerned about the social implications. The 2023 legislative session may be the deciding factor in whether or not casinos become legalized in New York. Here's a […]

Sunday’s Championship games resulted in another winning week for our player prop best bet card. We rolled to a 13-4 record in the Divisional and Championship rounds of the NFL postseason which brings us to the doorstep of Super Bowl 57 with a week off in between. What better way to spend that time than […]

I’d like to start by thanking you, the reader, for being part of an exciting, profitable season in the NFL. Through the conference championship games, our best bet record stands at 42-32 this year, meaning that bettors using the same unit size would be up somewhere in the ballpark of 6.8 units on the season. […]