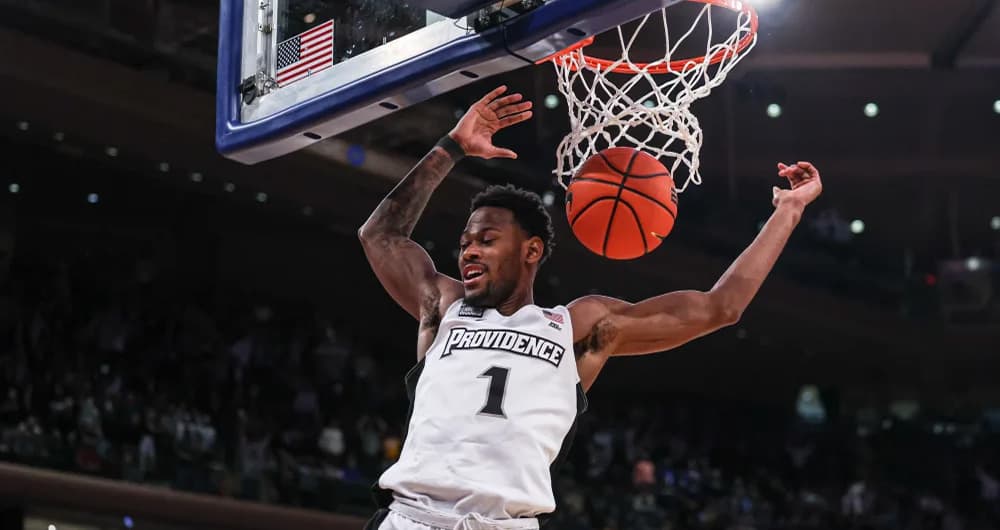 It didn't take long for the madness to begin. Out of the 20 million+ that were filled out across ESPN, Yahoo, CBS, and NCAA, only 192 perfect brackets remain following the Thursday games.

That being said, with one day in the books, we now have odds for Saturday's round of 32 games. Of the 8 games on Saturday's slate, only two have double-digit point spreads, with Kansas favored by 11 over Creighton and Gonzaga laying 10.5 against Memphis.

The most surprising team to advance into the Round of 32 is clearly Saint Peter's. The Peacocks opened as 8 point underdogs to Murray State. While we aren't willing to back a 20-11 team out of the Metro Atlantic, we are also not going to bet against a team that just beat Kentucky and is 9-1 ATS over their last 10.

Public bettors backed favorites in 12 of the 16 round 1 games on Thursday, and while that trend is likely to hold up throughout the tournament, we are almost certain to get a handful of upsets on Saturday. Here are our best bets for Saturday's Round 2 games of the NCAA Tournament.

Live Odds for Richmond vs Providence

Providence continues to be disrespected by oddsmakers. The Friars were in the top 10 in the Coaches poll heading into the Big East Tournament, are 26-5 this season and yet are a 2.5 point favorite against a 24-12 Richmond team? This type of point spread just doesn't make any sense.

Providence has an advantage just about everywhere you look in this game. The Spiders are 285th in the country in rebound % and will struggle to deal with Nate Watson, Noah Horchler, and Justin Minaya on the glass. Richmond did a good job on the glass against Iowa but we don't see them doing the same against Providence.

Despite playing a considerably tougher schedule, Providence has a significant advantage in both offensive efficiency and defensive efficiency. The Friars also have a ton of experience, as they're starting 5 seniors and playing only 1 underclassman. Experience means quite a bit this time of year!

This is one to jump on early, as it's hard to imagine too much Richmond support coming in, and we are already starting to see some books move to Providence -3. We made this number Providence -4.5, so we'll gladly lay the 2.5 points in this one and hope that Richmond's Cinderella story comes to an early end.

Live Odds for Memphis vs Gonzaga

Gonzaga always plays a weak schedule and it tends to get them in trouble in The Big Dance. The Bulldogs have only played the 106th toughest schedule in the country according to the Sagarin Ratings. We respect Gonzaga's 27-3 record but how many of those 27 wins would be considered quality wins?

Memphis, on the other hand, ranks 68th in strength of schedule. While the Tigers haven't exactly faced a murderer's row of opponents, they are much more battle-tested than Gonzaga. In March, we love teams that have been put to the test.

We aren't big on the common opponents' theory, but it's interesting that both of these teams faced Alabama during the regular season. Gonzaga lost to the Crimson Tide by 9 on December 4th while Memphis blew out Bama by 14 just 10 days later. That should give all Bulldogs backers a reason to be concerned.

When looking at the stats, Gonzaga has the edge in most of the crucial categories. One interesting stat that Memphis has an edge in is offensive rebounding. The Tigers pull down 11 offensive boards per game (13th) while the Bulldogs average 8.6 per game (150th). If Memphis can get some second-chance points, they can hang within this lofty number.

We admit that Gonzaga has a loaded roster and they're the better basketball team. However, asking this Bulldogs team to cover double digits against a solid Memphis team is a tall order. We love what Penny Hardaway is building and the fact that he has NBA legendary coach Larry Brown on his bench.

Our numbers say that Gonzaga should only be favored by 8 points in this game. There's too much value on the Tigers so take the points. Best of luck with all your action in Round 2!

If you've got a guy, you've got a chance as an underdog and Michigan has one in Hunter Dickinson. Dickinson shot 8 of 10 from the field, 5 of 5 from the line, and led Michigan with 21 points in their round 1 win over a really good Colorado State team.

The Wolverines are young. They start three true freshman and a sophomore, but that group includes three 5-stars and a 4-star. That group of players combined to score 55 of Michigan's 75 points against CSU.

Michigan entered the season #6 in the preseason Top 25, thanks in part to the talent on this roster and their recent tournament success. They have made it to the Sweet 16 or betting 5 times in the last 8 seasons.

Coming off of the SEC Tournament championship run, Tennessee is battle tested, but Michigan played the 7th toughest schedule in the country this season according to KenPom including one of the toughest non-conference schedules from a power 5 school.

The Wolverines have a massive edge in two key statistics: rebounding efficiency and offensive efficiency. If they are able to keep Tennessee off the offensive glass and get a big game out of Dickinson, they are certainly a live dog here.