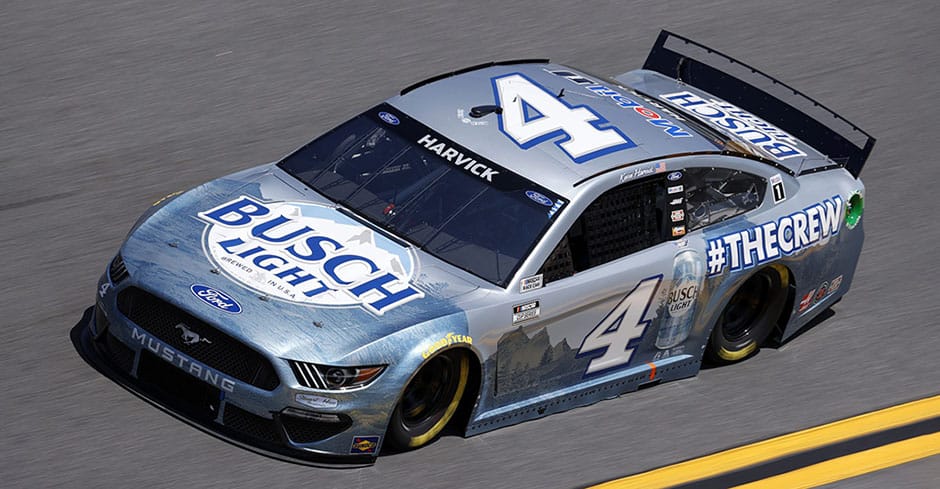 Chase Elliott caused some 4th of July fireworks of his own by winning the Jockey Made in America 250 last week. Elliot edged out Christopher Bell, Kyle Busch, and Kurt Busch to bring home his 13th career NASCAR victory. This week the racing stage will move to the Atlanta Motor Speedway for the Quaker State 400.

Atlanta Motor Speedway is 1.5 miles long and will require 260 laps to run the necessary 400 miles. The race will take place Sunday, July 11 at 3:30 PM Eastern Time. Ryan Blaney won the last race that took place at Atlanta Motor Speedway back on March 21 of this year. Is Blaney a threat to repeat, or will one of the other top guns like Joey Logano or Kevin Harvick find the winner’s circle?

In this article, we’ll go over our top picks to win the Quaker State 400 presented by Walmart. Be sure to shop around at all of your state’s respective sportsbooks for the best odds on these four best bets. Current odds below provided by William Hill Sportsbook.

Over the past 3 years, no driver has done better at Atlanta Motor Speedway than Kevin Harvick. The 45-year old has 20 years of experience in the NASCAR Cup Series and has won two out of his last four races here in Atlanta. Since the start of 2018, Harvick’s worst finish at this track was still a respectable 10th place showing this past March.

Taking Harvick as our top favorite in this field was a no-brainer. In 31 career starts in Atlanta, Harvick has 3 wins, 9 Top 5’s, and 16 Top 10’s. He’s also led a grand total of 1,348 laps at this track. That’s some serious domination!

After an incredible 2020 season that saw him win nine races, Harvick has not tasted victory yet in 2021. The Stewart-Haas Racing driver hasn’t had a winless season since 2009. Adding Harvick to your betting card for this weekend is a wise move since we expect him to run near the front all day long on Sunday. Give us Kevin Harvick +800 as our top favorite to win the Quaker State 400.

It’s hard to believe that Ryan Newman has been running in the Cup Series for 21 years. It’s even harder to believe that he’s never won a race at Atlanta Motor Speedway. We think that streak has a decent chance of being snapped on Sunday even though Newman has struggled to find his groove so far this season.

Though Newman has never won in Atlanta, he does have two Top 5’s, nine Top 10’s, and 19 Top 20’s over his 29 total races here. The 43-year old has also led 195 total laps at Atlanta Motor Speedway over the course of his career. Newman typically does well in qualifying here as his average starting position is 8th place.

Newman hasn’t won a Cup Series race since 2017 so the Roush Fenway Racing driver is long overdue to have some success. At the generous price of 200 to 1, we don’t mind sprinkling a little bit (0.1 units) on Newman as our top longshot to win the Quaker State 400.

Back in March at this track, Kyle Larson was the runner-up for the second time in his young career at Atlanta Motor Speedway. After two narrow misses (2021 and 2017) Larson will be ready to shed the bridesmaid title in Atlanta. Despite never winning here, Larson’s average finish is 12th place over seven career starts. Larson also tends to qualify well as he’s already won three pole positions in 2021.

Out of those seven races, Larson boasts two Top 5’s, four Top 10’s, and five Top 20’s. The 28-year old California native has also led 418 total laps at Atlanta Motor Speedway. A bet on Larson makes a lot of sense because this could be the week he finally breaks through at this track.

Larson is currently second in the points race and only three points behind Denny Hamlin for the top spot. He also has four wins this year, which is more than any other driver in the Cup Series. We’ll gladly bet on Larson at 2 to 1 odds.

Denny Hamlin has been a model of consistency when it comes to Atlanta Motor Speedway. The 40-year old has run here 22 times over the course of his career and has placed in the Top 20 15 times. Hamlin won at this track in 2012 and he also boasts six Top 5’s and nine Top 10’s here.

Hamlin leads the 2021 Cup Series points race with 798 after coming away from Road America last week with 37 points after finishing in 5th place. That was the 11th time this season that Hamlin has finished in the Top 5. The guy just seems to always be near the front of the pack each and every week.

Surprisingly, the winner’s circle has eluded Hamlin the entire 2021 season so far. That’s something that Hamlin will be motivated to change in Atlanta on Sunday. Put us down for Denny Hamlin +900 as our second bonus bet to win the Quaker State 400.

Blaney won here at Atlanta Motor Speedway back in March so he’ll have those good mental vibes to pull from this Sunday. However, Blaney has struggled a little bit in qualifying over his last seven races. The 27-year old has only qualified in the Top 10 once over that span.

Overall, Blaney is a solid driver but he’s never won more than once in a season. We don’t see that trend changing this week in Atlanta. Blaney’s definitely not a bad pick to win this week, but he didn’t make the cut for our best bets.