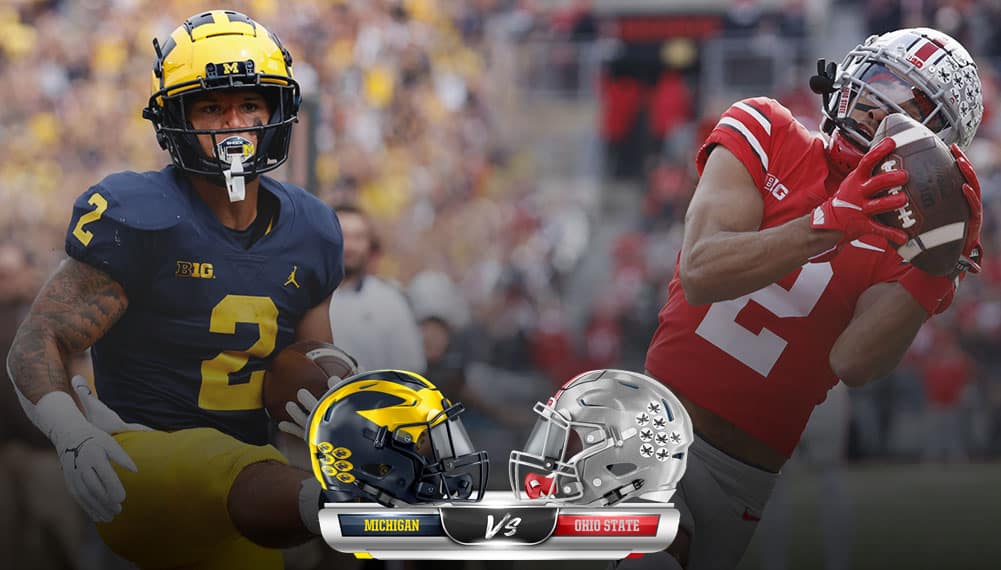 It's rivalry weekend around college football and there is no rivalry bigger than Michigan/Ohio State. Referred to as The Game, Michigan leads the all-time series at 58–51–6 but Ohio State has dominated over the past decade. In fact, with a win Saturday, Ohio State could tie the longest win streak by either team in the series (Michigan won 9 straight from 1901-1909).

The Game has historically defined each team's season. Michigan entered this game number four in the country in 2018 but was blown out by the 13th ranked Buckeyes who would go on to win the Big 10 title. The Buckeyes entered the 2019 game undefeated, ranked #1 in the country, and blew out the 13th ranked Wolverines to earn a spot in the college football playoffs.

This season's matchup features both teams ranked in the top 5, fighting for a spot in the 2021 college football playoff.

Before we jump into our analysis and pick for this matchup, let's start by looking at the current odds and line movement over the past week.

The look-ahead number for this game was Michigan +6.5 a week ago but it opened at +7.5 after Ohio State dismantled a Michigan State team that beat Michigan just two weeks ago. Buckeye bettors can currently find Ohio State -7 at PointsBet Sportsbook, while Wolverines bettors can find Michigan +8.5 at BetMGM Sportsbook.

The total opened at 65.5, under bettors moved the line all the way down to 63 at several books, but it currently sits back at 65 to 65.5 across the board. The odds displayed below reflect the best available number for each bet.

Is this Harbaugh's Year to Lead Michigan Over Ohio State?

Michigan fans will tell you this year's team is different and they would be correct. The running game has been dominant, averaging more than a full yard per carry more than they did entering the 2019 game. The passing game has been more consistent, with less than half the interceptions and three-times fewer sacks.

They also have depth across the board. The running back combination of Haskins and Corum has arguably been the best in the country this season, and freshman Donovan Edwards is coming off of a 170-yard receiving performance last week.

Despite losing Ronnie Bell early this season, this is one of the deepest groups of pass-catchers the Wolverines have had in years. Not only are starters Cornelius Johnson and Mike Sainristil producing, but freshman Andrel Anthony comes in averaging over 22 yards per reception. Erik All has come on over the past month and looks like an NFL tight end.

The Buckeyes seemed to right the ship over a four-game stretch against Akron, Rutgers, Maryland, and Indiana (combined 12-30 record). They enter this weekend having won three of their last four against ranked teams while averaging over 43 PPG over that stretch.

The Buckeyes are led by Heisman favorite CJ Stroud who throws to the projected #1 and #2 WR's in next year's draft class, Garrett Wilson and Chris Olave. If that wasn't enough, neither Wilson nor Olave lead the Buckeyes in receiving, as sophomore Jaxon Smith-Njigba has racked up 69 receptions for 1,132 yards on the year.

Given how little there is between these two teams statistically, we have to take the better defense getting 8.5 points at home. For those that haven't seen this Michigan team play this season, they have a pass rush unlike anything Ohio State has seen, led by David Ojabo (10 sacks) and Aidan Hutchinson (9.5 sacks).

We would argue that each of these teams' best wins came against Penn State. The difference being Michigan beat Penn State on the road, with the Nittany Lions coming off of a win, and their defense looked considerably more dominant in the process.

We get that these two defenses are great, Michigan has allowed more than 20 points twice all season and Ohio State has allowed 20 only twice in their last nine games, but all signs point to the over here.

Both the Wolverines and Buckeyes are top 15 scoring offenses this season, despite playing top 12 strength of schedules to date. The betting trends also point to this game turning into a shootout. The total has gone over each of the last five times these teams have faced off in the Big House and each of the last seven overall.

If we assume the Buckeyes and Ryan Day find a way to score on Michigan's 9th ranked defense, expect Michigan's passing attack to keep things close. Ohio State comes into this matchup 98th in the nation against the pass and McNamara has averaged over 250 YPG with a 9/1 TD/INT ratio over his last four (McCarthy added another 126 yards and 2 touchdowns over that stretch).